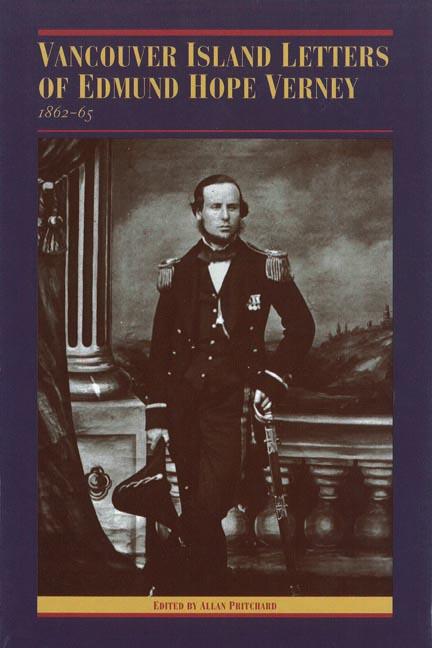 This previously unknown collection of letters lets us experience colonial British Columbia through the eyes of a young British naval officer who spent three years on Vancouver Island commanding a Royal Navy gunboat during the Cariboo gold rush.

A keen observer of life in the new world, Edmund Hope Verney corresponded on a regular basis with his father, a prominent British MP. In his letters, which are filled with lively narration and description, candid commentary, and fascinating personal detail, he talks about having 'the opportunity to observe a colony in [its first] stage of existence' and to 'watch the development of a community.'

Allan Pritchard is a professor emeritus in the Department of English at the University of Toronto.

Trivial or traumatic, everything went into the letters home ... Allan Pritchard's satisfying introduction and notes brief us on who-was-who and what-happened-next in both historical and human contexts.

Allan Pritchard ... Has made an excellent job of preserving and editing them for posterity ... A very useful and entertaining source for researchers into the maritime history of the Northwest Coast of America during a crucial phase of its political and economic evolution.

Allan Pritchard has discovered a remarkably revealing source and used it to create a book that is both useful and interesting ... Vancouver Island Letters makes accessible an archival source that is valuable not only for historians of British Columbia but also for scholars of nineteenth-century colonialism ... The sizeable introduction ... is well documented, thoughtful, and articulate ... A rare and fine book. It makes a revealing primary source easily accessible to anyone interested in British Columbia and colonial life ... Verney’s letters are an important reflection of British Columbia in the 1860s, and a telling testament to the peculiar perspectives and inner life of one foot-soldier of nineteenth-century colonialism.

Other titles by Allan Pritchard

English Biography in the Seventeenth Century