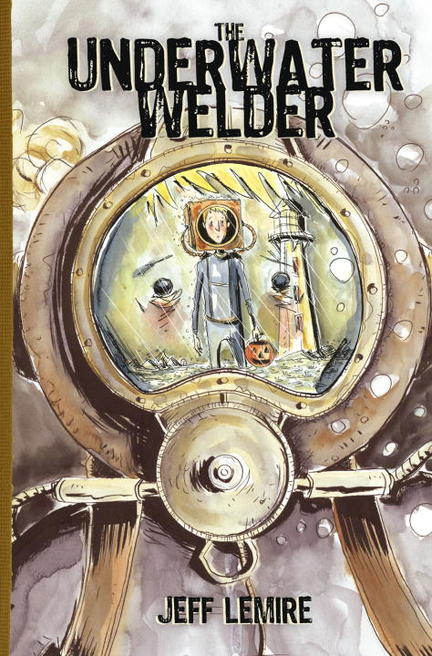 As an underwater welder on an oilrig off the coast of Nova Scotia, Jack Joseph is used to the immense pressures of deep-sea work — but not the pressures of impending fatherhood. While Jack dives deeper and deeper, he seems to pull further and further away from his young wife and their unborn son. Then one night, deep in the icy solitude of the ocean floor, Jack has a mysterious and supernatural encounter that will change the course of his life forever.

Equal parts blue-collar character study and mind-bending mystery, The Underwater Welder is a graphic novel about fathers and sons, birth and death, memory and reality, and the treasures we all bury deep below the surface.

Jeff Lemire is the award-winning, New York Times bestselling author of such graphic novels as Essex County, Sweet Tooth, The Underwater Welder, and Roughneck, as well as the co-creator of Descenderwith Dustin Nguyen, Black Hammer with Dean Ormston, Gideon Falls with Andrea Sorrentino, and many others. He also collaborated with celebrated musician Gord Downie on the graphic novel and album The Secret Path, which was made into an animated film in 2016. Jeff has won numerous awards, including an Eisner Award and Juno Award in 2017. Jeff has also written extensively for both Marvel and DC Comics. Many of his books are currently in development for film and television, including both Descender and A.D. After Death at Sony Pictures, Essex County at the CBC, The Underwater Welder and Plutona at Waypoint Entertainment, and Gideon Falls with Hivemind Media, as well as the Eisner-Award winning The Black Hammer Universe at Legendary Entertainment. He lives in Toronto, Canada with his wife and son and their troublesome pug, Lola.

"The most spectacular episode of The Twilight Zone that was never produced. I really, really care about the people in this story... And I can pretty much guarantee you will too." — From the introduction by Damon Lindelof (LOST, Star Trek, Prometheus, The Leftovers)
"With The Underwater Welder, Jeff Lemire has created a moving, brilliant, and fiercely original work about loss, longing, and love. Full of piercing moments that will stay with you for long after you've finished reading, The Underwater Welder is a testament to the basic truth that down in the depths or up on land, there's nothing more haunting and wondrous than the human heart. A masterpiece of visual storytelling." — Scott Snyder (Batman, Wytches, American Vampire)
"Lemire’s stylized art and inventive panel structure is the perfect vehicle for his well-told story, and the tale’s poignant moments make the moments of desolation even more heart-wrenching... A beautiful, moving, wholly satisfying story about fatherhood and growing up." — Publishers Weekly (starred review)
"[Lemire] has not lost his ability to pack an emotional wallop." — George Gustines, The New York Times
"A striking evocation of the Canadian Maritimes, and a moving meditation on what haunts us and how we struggle to keep those specters at bay. And the use of ink wash has rarely been put to more apt use." — Dana Jennings, The New York Times
"The Underwater Welder... is all kinds of wonderful. Buy it. You will wet yourself with tears, your brain will spin from masterful storytelling, and you will love it." — Jeff Jensen, Entertainment Weekly
"Haunting... Underwater Welder is just the right blend of action and abstraction, and greatly enhanced by Lemire's ability to signal movement, time and distance through clever arrangement of his panels on the page." — Cory Doctorow, Boing Boing

Other titles by Jeff Lemire

Skulldigger and Skeleton Boy: From the World of Black Hammer Volume 1

6 books to read this Halloween