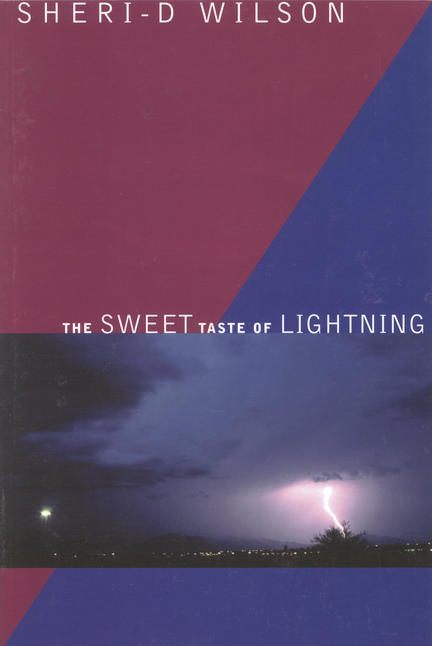 Canada's foremost action poet Sheri-D Wilson returns with The Sweet Taste of Lightning, a sublime new collection of poems that explore love and mortality with her distinct jazz-inflected sensibility. Startling and vulnerable, these are poems that speak from the heart, whether they be sassy missives from the street, or intimate confessions from one lover to another. There are also the trademark language stylings that evoke Sheri-D's powerful stage performances, full of wry, sexy truths. Lightning never tasted sweeter than in the cool poetic world of Sheri-D Wilson.

The "Mama of Dada"
Poet, film-maker, educator, producer, and activist Sheri-D Wilson has 7 collections of poetry; her most recent, Autopsy of a Turvy World (2008, Frontenac House). Her last collection, Re:Zoom (2005, Frontenac House), won the 2006 Stephan G. Stephansson Award for Poetry, and was shortlisted for the CanLit award. She has 2 Spoken Word CDs (arranged by Russell Broom), and 4 award-winning VideoPoems: Airplane Paula (2001), Spinsters Hanging in Trees (2002), Surf Rave Girrly Girrl (2004), and The Panty Portal (2008), all produced for BravoFACT.

Other titles by Sheri-D Wilson

A Love Letter to Emily C

The Book of Sensations

Woman Against Violence Against Women

Goddess Gone Fishing for a Map of the Universe

Inspiration from Poets who Teach