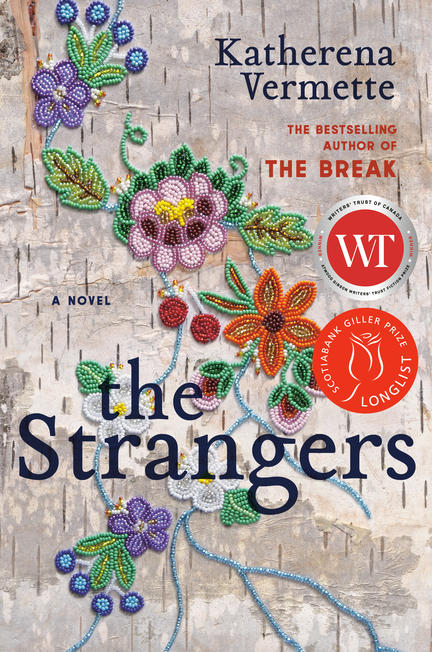 From the bestselling author of The Break comes a staggering intergenerational saga that explores how connected we are, even when we’re no longer together—even when we’re forced apart.

After time spent in foster homes, Cedar goes to live with her estranged father. Although she grapples with the pain of being separated from her mother, Elsie, and sister, Phoenix, she’s hoping for a new chapter in her life, only to find herself once again in a strange house surrounded by strangers. From a youth detention centre, Phoenix gives birth to a baby she’ll never get to raise and tries to forgive herself for all the harm she’s caused (while wondering if she even should). Elsie, struggling with addiction and determined to turn her life around, is buoyed by the idea of being reunited with her daughters and strives to be someone they can depend on, unlike her own distant mother. These are the Strangers, each haunted in her own way. Between flickering moments of warmth and support, the women diverge and reconnect, fighting to survive in a fractured system that pretends to offer success but expects them to fail. Facing the distinct blade of racism from those they trusted most, they urge one another to move through the darkness, all the while wondering if they’ll ever emerge safely on the other side.

A breathtaking companion to her bestselling debut The Break, Vermette’s The Strangers brings readers into the dynamic world of the Stranger family, the strength of their bond, the shared pain in their past, and the light that beckons from the horizon. This is a searing exploration of race, class, inherited trauma, and matrilineal bonds that—despite everything—refuse to be broken.

KATHERENA VERMETTE is a Métis writer from Treaty One territory, the heart of the Métis nation, Winnipeg, Manitoba, Canada. Her first book, North End Love Songs (The Muses Company), won the Governor General’s Literary Award for Poetry. Her National Film Board short documentary, this river, won the Coup de Coeur award at the Montreal First Peoples Festival and a Canadian Screen Award.

Her first novel, The Break, was a national bestseller and won the Amazon.ca First Novel Award; the Burt Award for First Nations, Inuit, and Métis Young Adult Literature; and three Manitoba Book Awards. It was a finalist for the Governor General’s Literary Award, the Rogers Writers’ Trust Fiction Prize, and CBC’s Canada Reads. She is also the author of the children’s picture book series The Seven Teaching Stories and recently published the first book, Pemmican Wars, in the young adult book series A Girl Called Echo. Ms. Vermette’s second book of poetry, river woman, is forthcoming in the fall of 2018 from House of Anansi Press.

#1 NATIONAL BESTSELLER
WINNER OF THE ATWOOD GIBSON WRITERS' TRUST PRIZE FOR FICTION
SHORTLISTED FOR THE 2022 MANITOBA BOOK AWARDS’ CAROL SHIELDS WINNIPEG BOOK AWARD, MARGARET LAURENCE AWARD FOR FICTION, AND MCNALLY ROBINSON BOOK OF THE YEAR AWARD
LONGLISTED FOR THE 2021 SCOTIABANK GILLER PRIZE
A GLOBE & MAIL BEST BOOK
One of:
Quill & Quire's "2021 Best of Fall guide"
CBC's "65 Canadian Works of Fiction to Watch Out for in Fall 2021"
Chatelaine's "5 New Books to Read This Fall"
Toronto Star's "35 Books you need to know about in fall 2021"
CBC's "The most exciting Canadian books coming out in Fall 2021"
Shedoesthecity's "Fall Releases That Should Be On Your Radar"
CBC's "33 Canadian books coming out in September we can't wait to read"
NOW Magazine’s “15 best new books to read this fall”
Elle’s “10 Books You’ll Want to Read This Fall”
Praise for The Strangers:

“Reminiscent of the hard-scrabble tales of the Métis in the Road Allowance days, Vermette offers up a beautiful, raw testament to those living on the margins. Brilliantly weaving the lives of the Strangers into stories within stories within stories, Vermette’s confident, understated prose walks the reader through the unforgiving reality of the descendants of those who stood with Riel and Dumont, grasping for survival in a world committed to a long-established campaign of dispossession. Cathartic and disturbing, The Strangers offers vital insight into the colonial brutality that still haunts the lives of the Métis.”
—2021 Atwood Gibson Writers' Trust Fiction Prize Jury (Rebecca Fisseha, Michelle Good, and Steven Price)
“Katherena Vermette’s The Strangers is a deeply moving story of how colonial institutions continue to bear down on and disrupt the lives of Indigenous women and girls. It is a powerful collective portrait of struggle and resistance, of what it’s like to be in an Indigenous body in twenty-first century Canada. In the end, it adds up to an engrossingly written ode to another kind of care, one against the grain of suffering. A brilliant follow-up!”
—Billy-Ray Belcourt, bestselling author of A History of My Brief Body
“The Strangers is a unique and essential triumph of a novel. It is revelatory in its artistry—in its constellating of family against violent separation, in its austere poetics of voice and consciousness.  Katherena Vermette has proven once again that she is among the most gifted and relevant writers of our time: someone with everything to teach us about the telling of necessary stories, about grieving the fallen, honouring survival, and revealing the fiercest beauty.”
—David Chariandy, award-winning author of Brother and I’ve Been Meaning to Tell You

“With its relevant subject matter and poignant prose, Vermette’s second novel is poised to be as triumphant as her first. [In The Strangers], the author crafts another strong, emotional portrait of Indigenous women.”
—Canadian Living
“Filled with vulnerability and loss. . . . It’s an honest confrontation of Indigenous identity.”
―Chatelaine

“Vermette has a way of seeing light through the crack in the wall of a dark room.”
—NOW Magazine
“A searing indictment of the pressures and travails placed on Indigenous women.”
—Toronto Star
“Quite simply, Vermette. . . . [is] writing for Indigenous people, as opposed to just about Indigenous people.”
—CBC
“The Strangers is a devastatingly beautiful dive deeper into. . . . [Phoenix’s] story, and that of her family.”
—Quill & Quire (starred review)
“This Writer’s Trust Prize-winning. . . . piece is a potent, audacious intergenerational saga that explores race, class, inherited trauma and the strength of matrilineal bonds.”
—The Globe and Mail
“Vermette has an uncanny ear for the rhythm and the cadences of all her characters’ voices. . . . [F]rom its opening pages, The Strangers. . . . speaks, starkly and eloquently, as if directly to the community of readers it creates.”
―Winnipeg Free Press
“The story moves back and forward in time, solidifying the branches of a family tree that has grown from both mythology and a harsh realpolitik, growing stronger all the while. This is a fictional family to believe in.”
—ABC

Other titles by Katherena Vermette

The Girl and the Wolf