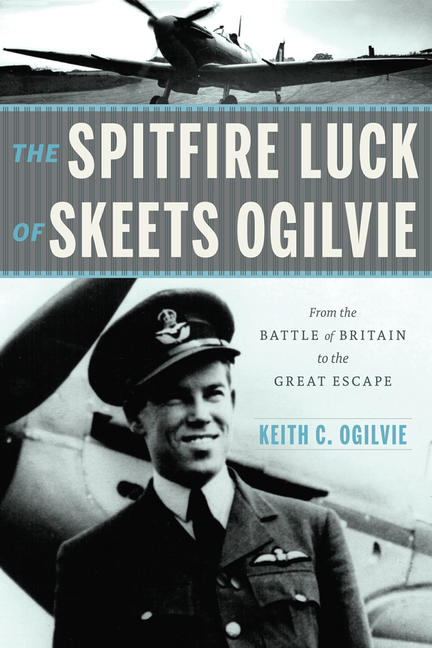 A young Canadian spitfire pilot finds adventure, love, and a remarkable dose of luck on the frontlines of the Second World War.

Rejected by the Royal Canadian Air Force in the summer of 1939, Keith “Skeets” Ogilvie joined the British Royal Air Force instead. A week later he was on a boat to England and a future he could not have imagined.

As a Spitfire pilot in the Battle of Britain, Skeets established his credentials with six confirmed victories and several enemy aircraft damaged. On leave in London one weekend, he met Irene Lockwood, a charming fellow Canadian who was living out her own wartime adventure—and who would one day become his wife. The following July, Skeets was shot down over France and was treated for grievous injuries by top German surgeons. He waited out the rest of the war at Stalag Luft III prison camp and was the second-last man out of the “Great Escape” tunnel, only to be recaptured three days later. For reasons he never understood, Skeets was one of only twenty-three escapees not murdered by the Gestapo.

The Spitfire Luck of Skeets Ogilvie is the story of an ordinary man who beat incredible odds on the frontlines, and the remarkable woman with whom he was reunited at the end of the War.

Keith C. Ogilvie is the “lucky” son of Skeets and Irene Ogilvie (née Lockwood). With the help of a treasure trove of personal correspondence, diaries, scrapbooks, and media collected by his parents, he was inspired to tell their remarkable story in this, his first book. Ogilvie has enjoyed a forty-year career in governance-related fields, more than half of that time working internationally as a field program director and independent advisor.

“This is a new and fresh telling [of the Battle of Britain], admirably sourced, textually and graphically crisp, a convincing chronicle of people making the best of trying circumstances. Keith Ogilvie’s statement of purpose is 'not just to talk about the extraordinary but to celebrate the ordinary too, as being extraordinary in its own right. He delivers.”

“This is more than just a typical family history—this is the remarkable story of a very lucky man, one who took part in the aerial fight for England, who had to bale out when his aircraft was shot down, was captured by the Germans and endured years in prisoner-of-war camps—and to top it off, was one of the few survivors of the famous Great Escape. Highly readable and highly moving."