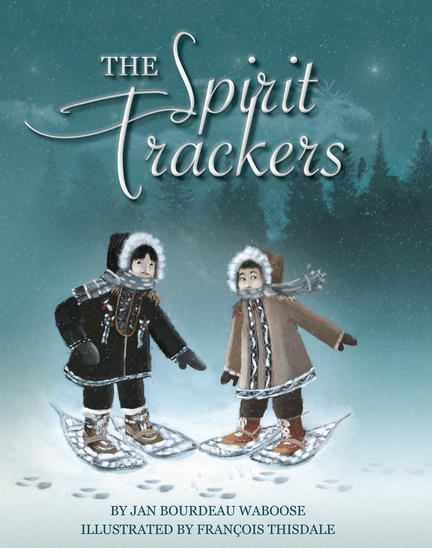 Will and Tom speak in a whisper.
"Uncle, tell us the story of the Windigo."
The boys look behind them for something they can't see.

When Uncle shares the story of the Windigo, the cousins get more than they expect. That night something strange scratches at the frost on their bedroom window. In the morning they find huge tracks in the snow. The Wandering Night Spirit of Winter!

Tom and Will know what good Trackers would do, so they follow the trail deep into the forest. Then a strange cry slices the air.

"Remember," Will whispers as they move forward. "Don't look into its eyes."

Can you be a tracker too? Find the tracks hidden in the pictures.

Jan Bourdeau Waboose is First Nation Anishinaabe of the Ojibway Bear Clan from northern Ontario. Jan started writing stories and poetry from a young age. She draws on childhood experiences and her work reflects her traditions and culture of the Indigenous peoples. Her writings respect and honour families and our natural surroundings. Jan's titles include: SkySisters, Morning on the Lake, (shortlisted Mr. Christie book Award) Firedancers, Where Only the Elders Go, and numerous poetry anthologies.

"Anishinaabe Waboose's prose seamlessly threads her people's legends with her story of a modern First Nations family that is keeping its traditions alive. Award-winning illustrator Thisdale's expressive and detailed illustrations add depth to Waboose's engaging text. His mixed-media paintings successfully blend the traditional and the modern, the comfortably familiar and the uncanny, to support the story's themes. An intergenerational tale that celebrates both a specific tradition and the universal curiosity of children."
— Kirkus Starred Review

"Jan Bourdeau Waboose's visually stunning picture book The Spirit Trackers introduces young readers to the story of the Windigo and the importance of 'trackers' in Anishinabe culture. . .
One of the standout elements in this book was the dialogue, in particular the respectful way that Tom and Will address not only their elder, but each other. Their words are simple and clear, but there is a subtlety to the writing here that will make young readers read between the lines- what are they saying, but more importantly, what do they actually mean? Waboose manages to leave room for interpretation without leaving room for confusion.
The colour scheme in The Spirit Trackers is winter all the way through, with cool blues and browns that reflect a sort of earthy calm. The most interesting thing about the illustrations is the subtle shifts and "pops" of colour on some pages that highlight certain pieces of the picture. Thisdale's work is truly captivating. The added touch of the hidden tracks in each illustration creates a lovely interaction between the reader and the story. The font size is a bit large at times as it sometimes covers up more of the illustration than is necessary, but overall the amount of text on each page would be well-suited for an early to middle elementary reader.
Rather than simply sharing the story of the Windigo, The Spirit Trackers shares the spirit of the myth. Any title that so clearly and respectfully introduces pieces of Indigenous culture to young readers should be added to both school and public library collections.
Recommended."
— CM Magazine

"Franï¿½ois Thisdale showcases his unique blend of drawing, photography, digital imagery, and printing in The Spirit Trackers. The artist's technique, already impressive, is only getting better and better. The expressions on the boys' faces are hilarious, and the textures of snow and hair sparkle and pop, almost appearing to be three-dimensional."
— Montreal Review of Books

"Richly illustrated in mixed media, Waboose weaves a story of respect for nature and family. The boy's insistence of their bravery is countered by their natural fear of the unknown — and the stories they have heard. A great read for a stormy winter night. Beware of the Windigo!"
— kissthebookjr.blogspot.com

"Gorgeous illustrations and suspenseful writing fully engross the reader and have my kids sitting on the edge of their seats every time. This emotional engagement makes it a perfect read for discussing the concept of bravery, while the story's details provide wonderful cultural education. And as a fun bonus, the endpapers show different animal tracks that you can spot throughout the book - just like good Trackers!"
— Read. Learn. Repeat. Blog