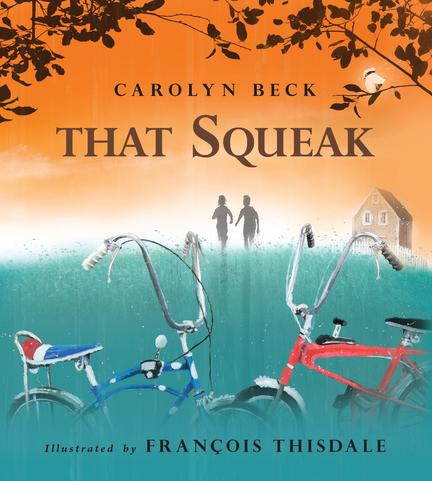 Joe and Jay were best friends. There was nothing more fun than spending the day exploring on their bikes.

But things have changed now. Jay is gone and Joe can't help but notice that his parents have forgotten that Jay's bike is still parked outside the school. Joe decides to take the bike home — to polish it and paint it up just like Jay would have liked.

That is when the new kid Carlos offers to help — but he probably just wants to steal it. Then again, maybe there is more to Carlos's story than meets the eye. And maybe Joe has finally found a new friend to share the special place and the bike that has "that squeak" with.

After winning a prize for her story “Petulia, the Petunia,” in grade three, Carolyn Beck knew she wanted to write, but it wasn’t until she grew up and had a family of her own that she truly pursued this career path. Previous titles include The Waiting Dog, Buttercup’s Lovely Day, Richard Was a Picker, and Wellington’s Rainy Day. She lives in Toronto, Ontario.

"Beck's lovely story of loss and friendship has the scope of a novel; its focus is far more on Joe's emotions than events, and readers never learn how Jay was killed. Thisdale's moody, painterly illustrations present Joe as a dreadlocked black boy and Carlos as a long-haired Latino; both appear to be young adolescents."
— Kirkus Reviews

"That Squeak is a moving experience on many levels, some beyond speaking. It is a transformational story that gently stimulates inner growth of the heart. Boys and girls of different ages may deeply appreciate That Squeak, as will the adults who are privileged to read it."
— Midwest Book Review

"Moody, dark-toned illustrations create a fitting atmosphere for the emotional text, as the boys express their anger and sadness over their losses in a honest, heartfelt manner."
— Booklist

"There are plenty of books that deal with difficult subjects for young readers, but few handle the subject of death with as much grace and delicacy as Carolyn Beck's story about a boy who loses his best friend. Beck's narrative addresses the grief, anger, and healing such a tragedy brings, and is awash in hope-filled poetry matched by Franï¿½ois Thisdale's striking, multifaceted images.
— Quill & Quire

"Joe's unabashed, first-person narration directly addresses his deceased friend. With poetic immediacy, readers are privy to Joe's anguish as it spills over in sentences such as, "Inside my ribs, big aching sobs suck and heave like tidal waves." That Squeak tackles complex issues with an authentic voice that won't soon be forgotten."
— The National Reading Campaign

"That Squeak is definitely special, a standout story worthy of a permanent spot on the family bookshelf."
— BookPage

"A hauntingly universal story of loss and acceptance."
— Montreal Gazette

"Wow. That Squeak is not a trivial story or a childish read. It covers important issues of friendship and death, grief and anger, and acceptance and memory. And Carolyn Beck writes it with the gravity it deserves."
— CanLit for LittleCanadians

"A touching story about friendship, death, and acceptance."
— Kidsbookshelf.com

"That Squeak is a highly recommended picture book for its story and its art. With a well-developed plot, strong characterization, emotional sensitivity, and a satisfying ending, it is a very good bike story. In addition, That Squeak is an endearing narrative about friendships between boys that cut across boundaries of race, class, and sorrow, and one that effectively as well as beautifully engages the subject of the death of a friend and a parent. Beck's use of the literary apostrophe—to have Joe address himself to Jay as if he were present—and Thisdale's artistic skill in expressing male tenderness and vulnerability, added nuance and depth to their holistic storytelling. The smooth interplay between text and art that is present throughout this important book makes it one that I will not forget anytime soon.
Highly Recommended. "
— CM Magazine

"Beck gives voice to the powerful emotions of loss, friendship, and fear in this quiet story for older kids. Thisdale's at times surreal mixed media illustrations use a palette of blue, gray, and black to express sadness."
— The Horn Book Guide

Other titles by Carolyn Beck

Richard was a Picker Read-Along

Richard Was a Picker

Other titles by Francois Thisdale

CCBC Awards: Seeds of a Story

Nominees for the top kids' book awards in Canada share the inspiration for their celebrated works.