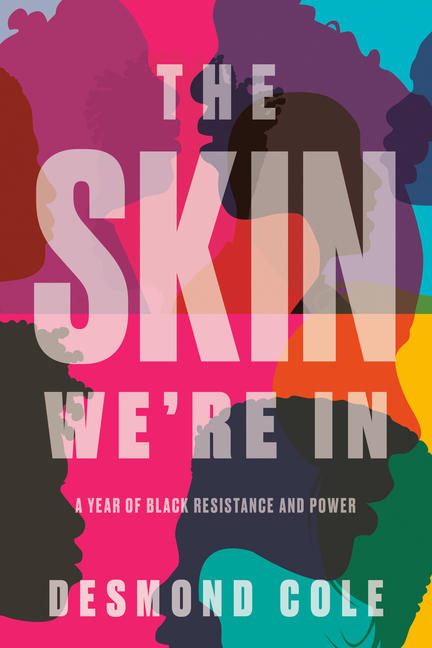 NATIONAL BESTSELLER
WINNER OF THE 2020 TORONTO BOOK AWARD
A bracing, provocative, and perspective-shifting book from one of Canada's most celebrated and uncompromising writers, Desmond Cole. The Skin We're In will spark a national conversation, influence policy, and inspire activists.

In his 2015 cover story for Toronto Life magazine, Desmond Cole exposed the racist actions of the Toronto police force, detailing the dozens of times he had been stopped and interrogated under the controversial practice of carding. The story quickly came to national prominence, shaking the country to its core and catapulting its author into the public sphere. Cole used his newfound profile to draw insistent, unyielding attention to the injustices faced by Black Canadians on a daily basis.

Both Cole’s activism and journalism find vibrant expression in his first book, The Skin We’re In. Puncturing the bubble of Canadian smugness and naive assumptions of a post-racial nation, Cole chronicles just one year—2017—in the struggle against racism in this country. It was a year that saw calls for tighter borders when Black refugees braved frigid temperatures to cross into Manitoba from the States, Indigenous land and water protectors resisting the celebration of Canada’s 150th birthday, police across the country rallying around an officer accused of murder, and more.

The year also witnessed the profound personal and professional ramifications of Desmond Cole’s unwavering determination to combat injustice. In April, Cole disrupted a Toronto police board meeting by calling for the destruction of all data collected through carding. Following the protest, Cole, a columnist with the Toronto Star, was summoned to a meeting with the paper’s opinions editor and informed that his activism violated company policy. Rather than limit his efforts defending Black lives, Cole chose to sever his relationship with the publication. Then in July, at another police board meeting, Cole challenged the board to respond to accusations of a police cover-up in the brutal beating of Dafonte Miller by an off-duty police officer and his brother. When Cole refused to leave the meeting until the question was publicly addressed, he was arrested. The image of Cole walking out of the meeting, handcuffed and flanked by officers, fortified the distrust between the city’s Black community and its police force.

Month-by-month, Cole creates a comprehensive picture of entrenched, systemic inequality. Urgent, controversial, and unsparingly honest, The Skin We’re In is destined to become a vital text for anti-racist and social justice movements in Canada, as well as a potent antidote to the all-too-present complacency of many white Canadians.

DESMOND COLE is an award-winning journalist, radio host, and activist in Toronto. His writing has appeared in the Toronto Star, Toronto Life, The Walrus, NOW Magazine, Ethnic Aisle, Torontoist, BuzzFeed, and the Ottawa Citizen. The Skin We're In is Cole's first book.

"Cole's book stands out as a powerful call to action. A superb synthesizer, the unstoppable Cole addresses racisms of all kinds across the country, but it’s his terrific takedown of Toronto policing that stands out." —NOW

"The sheer strength of this book arises from its insistent linking of policing, prisons, public education, migrant labour, impoverished neighbourhoods and the fates of refugees. The Skin We're In is about the interlocking forces besieging Black life in Canada; and it is also about organizing resistance and imagining futures in bravely intimate terms. Desmond Cole is an urgent and essential voice from a generation that will be heard." —David Chariandy, author of Brother and I’ve Been Meaning to Tell You: A Letter to My Daughter

"In The Skin We're In, Desmond Cole offers us not only analysis of one year of anti-blackness in the lands we currently call Canada: he also recovers disappeared histories of Black resistance, gives richly deserved credit to Black LGBTQ+ activists, shows solidarity with disabled and Indigenous folks, and, most importantly, reminds us of the power of Black genius and Black joy. This smart, powerful, essential book is an act of radical generosity—one we should all be grateful to receive, hold, share and revisit.” —Alicia Elliott, author of A Mind Spread Out on the Ground

"Desmond Cole systematically dismantles any lingering illusions of Canada as a beacon of racial benevolence by exposing the multiple forms of state violence facing Black peoples of all ages and genders. His text, further, compellingly highlights the ongoing refusal of Canada's Black diaspora to submit to conditions of subjugation, bringing to light both historical and contemporary legacies of rebellion. A powerful read." —Robyn Maynard, author of Policing Black Lives: State Violence in Canada from Slavery to the Present
"It is not an exaggeration to say that Desmond Cole's book should be taught in classrooms, roiling in the minds of the next generation, lauded in social justice movements. It's a striking, searing, perspective-shifting book that draws attention to the injustices faced by Black Canadians on a daily basis. . . . His prose contains the grace, clarity, caution and cadence of someone familiar with speaking up and standing tall. He seamlessly integrates historical and theoretical material with analyses of recent events, making the text informative and incisive without sacrificing emotional resonance. . . . The book represents a solid introduction to themes of white supremacy, imperialism and power, anti-Black racism, and Cole's own life and values . . . [and] as Cole powerfully illustrates, Black pain—and the fight against it—does not always have a tidy, smooth, palatable ending." —Quill and Quire, starred review

"Part biography, part journal, part guide to anti-racism activism, The Skin We’re In might be Desmond Cole's first book but its story is one that people of colour will immediately find familiar. . . . If you are a human being or socially aware robot, read this book." —This Magazine

"Desmond Cole's The Skin We're In is an uncompromising yet utterly compelling dissection of a long neglected but fundamental aspect of Canadian life: anti-Black racism. This is a story of confrontation and resistance, but also of deep listening and bearing witness. Written with power and verve, Cole's sharp, urgent, and lyrical prose reveals an author with a capacious intellect, moral clarity, and unwavering commitment to justice. Cole challenges his home and native land to dispense with magical thinking and reckon with uncomfortable truths." —2021 Shaughnessy Cohen Prize Jury

"A skillful blend of history and reportage, The Skin We're In punctures any illusions Torontonians may harbor about race relations in their City, and provides a local front-line perspective on Black Lives Matter. Desmond Cole describes his progression from journalist to activist on behalf of Toronto’s black residents fed up with mistreatment at the hands of the police, lip service from politicians and media, and indifference from the community at large. Accomplished, timely and powerful, The Skin We're In is a potent and urgent reminder that there is no place for complacency in the battle against racism." —2020 Toronto Book Awards jury