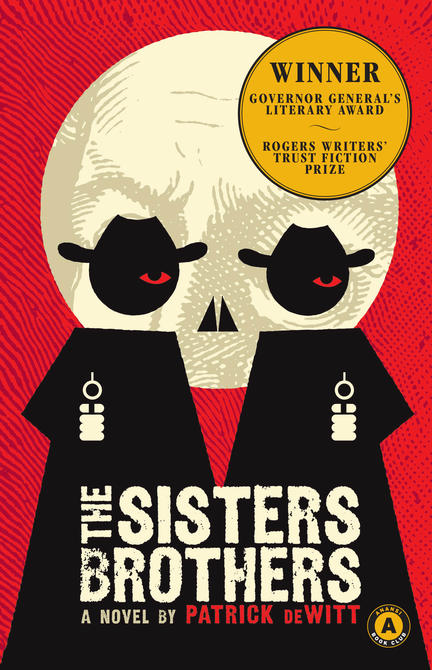 Winner of the Governor General’s Award for Fiction, the Rogers Writers’ Trust Fiction Prize, and the Stephen Leacock Medal, the Prix des libraires du Quebec and shortlisted for the Man Booker Prize, the Scotiabank Giller Prize, and a #1 national bestseller, The Sisters Brothers is a violent, lustful, hung-over and hilarious odyssey through the underworld of the 1850s frontier.

Hermann Kermit Warm is going to die: Eli and Charlie Sisters can be counted on for that. Though Eli has never shared his brother’s penchant for whiskey and killing, he’s never known anything else. On the road to Warm’s gold-mining claim outside San Francisco — and from the back of his long-suffering one-eyed horse — Eli struggles to make sense of his life without abandoning the job he’s sworn to do.

Award-winning and critically acclaimed author Patrick deWitt doffs his hat to the classic Western, and then transforms it into a comic tour-de-force with an unforgettable narrative voice that captures all the absurdity, melancholy, and grit of the West — and of these two brothers, bound to each other by blood and scars and love.

Patrick deWitt was born on Vancouver Island in 1975. He is the author of two critically acclaimed novels: Ablutions and The Sisters Brothers, which won the Governor General’s Literary Award for Fiction, the Rogers Writers’ Trust Fiction Prize, and the Stephen Leacock Medal, and was shortlisted for the Man Booker Prize and the Scotiabank Giller Prize. He lives in Portland, Oregon.

Bursting with vitality and driven along by a terrific pulpy energy, The Sisters Brothers is the kind of book you may well end up wholeheartedly recommending to friends.

[Patrick deWitt] has taken the typical saga and, with laser-sharp prose, masterful storytelling, and an eccentrically perfect combination of humor, violence, lust, and pathos, has turned it completely upside-down. Never has the Old West seemed so simultaneously and page-turningly beautiful, tragic, and comedic, or a cowboy so delightfully neurotic.

. . . edgy and unyielding . . . The Sisters Brothers gives readers a sense of adventure without ever having to stare down the barrel of a gun.

DeWitt’s inspired, many-layered yarn is as entertaining and as stylistically accomplished as it is unsettling and most original in its revisiting of what remains a glorious genre.

The Sisters Brothers is a bloody, nightmarish frontier road trip that seems at times like something out of Cormac McCarthy, yet somehow merges laughter and hope with suffering, death and betrayal. [...] Like an alchemist, deWitt has refined and purified the base metals of black comedy and the western to produce literary gold.

. . . a darkly comic, compelling and surprising story . . . I doubt I'll find a more entertaining and thoughtful novel this year.

. . . imaginative and ebullient . . . revels in the hilarious life and times of two gunslingers, Eli and Charlie Sisters.

In The Sisters Brothers, a diabolical combination of Laurel and Hardy and Butch Cassidy and the Sundance Kid (with a touch of Don Quixote and Sancho Panza, just to emphasise the high literary stakes) deWitt has ensured another unforgettable pair their place in fictive lore.

[Patrick] DeWitt has produced a genre-bending frontier saga that is exciting, funny, and perhaps unexpectedly, moving.

There is something irresistibly cinematic about this quirky tale, a Coen brothers-style strangeness that paradoxically celebrates an unlikely humanity.

Violent, funny and strangely touching, [The Sisters Brothers is] destined for a spot on many best-of-2011 lists.

Patrick deWitt has written an Old West tale that conjures up the colourful images of a spaghetti western filled with stark realism, eccentric characters and black humour . . . If you’re looking for an unforgettable western, grab this one.

DeWitt has invigorated [the] well-worn path [of the classic Western] with wit, style, and imagination.

Wandering his Western landscape with the cool confidence of a practiced pistoleer, deWitt's steady hand belies a hair trigger, a poet's heart and an acute sense of gallows humor . . . It's easy to imagine John C. Reilly - who is set to star in the film version of the book - lumbering through this breezy, pitch-black comedy's cinematic scenes.

So subtle is deWitt's prose, so slyly note-perfect his rendition of Eli's voice in all its earnestly charming 19th-century syntax, and so compulsively readable his bleakly funny western noir story, that readers will stick by Eli even as he grinds his heel into the shattered skull of an already dead prospector.

. . . smooth and seamless, shot through with dark humor . . . as easy to slip into as the old HBO series 'Deadwood.'

. . . a book that’s both a heck of a lot of fun to read and surprisingly compelling when it ends -- one that both your hipster brother and your straight-arrow dad will get a kick out of.

. . . cinematic, wry and mannered . . . DeWitt['s] ability to distill an image with a couple of well-chosen words and the precision and intensity of his language gives [The] Sisters [Brothers] a dreamlike aura.

. . . gory, mesmerizing . . . carries a strong echo of Pulp Fiction . . . seduces us to its characters, and draws us on the strength of deWitt's subtle, nothing-wasted prose.

. . . spirited and often humorous . . . Patrick deWitt's picaresque narrative works with a wink and a nod of reverence, squaring with recent revivals of the Western in popular culture, namely HBO's Deadwood.

The Sisters Brothers is a bold, original and powerfully compelling work, grounded in well-drawn characters and a firm hold on narrative. When they say “They don’t write em like that anymore,” they’re wrong.

The Sisters Brothers has a cadence and flow to its prose and the reader can almost hear Eli's laconic narration as the pages turn . . . here is a hardcover that practically holds a Colt to your head and growls: read me.

Fully invested, DeWitt is a hilarious, wry wordsmith and a masterful storyteller. The Sisters Brothers, with its sharp edges and instinctive compassion, is far from historical displacement or genre escapism. It is art worthy of the status, regardless of context or -ism.

Other titles by Patrick deWitt

8 Books That Don't Play by the Rules