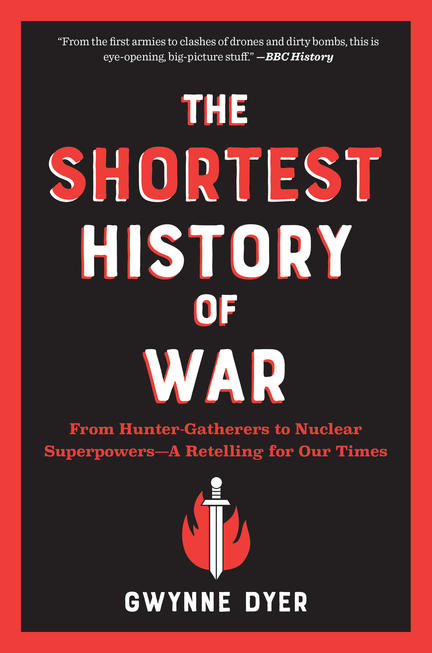 War has changed, but we have not. From our hunter-gatherer ancestors to the rival nuclear powers of today, whenever resources have been contested, we’ve gone to battle. Acclaimed historian Gwynne ­Dyer illuminates our many martial clashes in this brisk account, tracing warfare from prehistory to the world’s first cities — and on to the thousand-year “classical age” of combat, which ended when the firearm changed everything. He examines the brief interlude of “limited war” before eighteenth-century revolution ushered in “total war”— and how the devastation was halted by the nuclear shock of Hiroshima.

Then came the Cold War and Russia’s invasion of Ukraine, which punctured the longest stretch of peace between major powers since World War II. For all our advanced technology and hyperconnected global society, we find ourselves once again on the brink as climate change heightens competition for resources and superpowers stand ready with atomic bombs, drones, and futuristic “autonomous” weapons in development.

Throughout, Dyer delves into anthropology, psychology, and other relevant fields to unmask the drivers of conflict. The Shortest History of War is for anyone who wants to understand the role of war in the human story — and how we can prevent it from defining our future.

Originally from St. John's, NL, Gwynne Dyer is an admired journalist, columnist, broadcaster, and lecturer on international affairs. His documentary television series on the history of War was nominated for an Academy Award; his twice-weekly column on international affairs appears in 175 newspapers in 45 countries and is translated into more than a dozen languages. He is currently based in London, UK.

“Dyer's gift for taking information that might seem overwhelming or dry in other hands and making it urgent, clear, and impactful makes The Shortest History of War essential reading.”

“Readable and sharp … does what it says on the tin.”

“Dyer writes with eloquence and authority … particularly effective in painting in broad strokes the evolution of warfare.”

“An incisive and well-informed overview of how warfare has evolved.”

“From the first armies to clashes of drones and dirty bombs, this is eye-opening, big-picture stuff.”

Other titles by Gwynne Dyer

the future of democracy (and work)

Crawling from the Wreckage

The Mess They Made (Revised Edition)

The Mess They Made