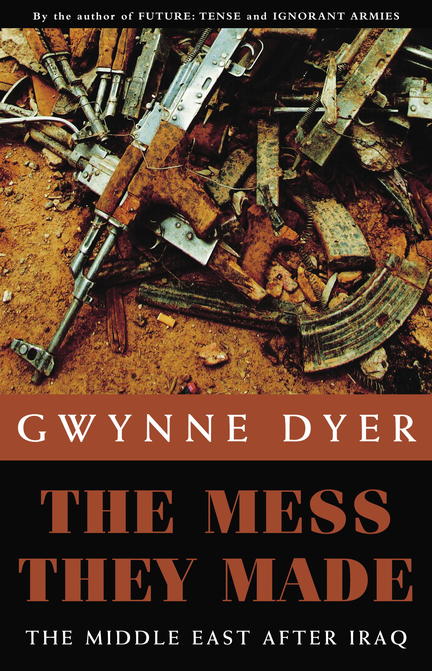 As Iraq descends ever closer to civil war, no one doubts that George W. Bush's Iraq strategy has been an abysmal failure -- just as Gwynne Dyer argued it would be in both Ignorant Armies and Future: Tense. The question now is what will happen not just in Iraq but in the whole Middle East region once American troops are withdrawn. In The Mess They Made, Dyer predicts that the Middle East will go through the biggest shake up since the region was conquered and folded into the Ottoman Empire five centuries ago.

In his trademark vivid prose, and in arguments as clear as his research is thorough, Dyer brings his considerable knowledge and understanding of the region to bear on the issue of how widespread the meltdown in the Middle East will likely be. In five chapters, Dyer points the way from present policies and events to likely future developments in Iraq, Iran, Afghanistan, and in the various other countries of the region, not least of which is nuclear-armed Israel.

Originally from St. John's, NL, Gwynne Dyer is an admired journalist, columnist, broadcaster, and lecturer on international affairs. His documentary television series on the history of War was nominated for an Academy Award; his twice-weekly column on international affairs appears in 175 newspapers in 45 countries and is translated into more than a dozen languages. He is currently based in London, UK.

Excerpt: The Mess They Made: The Middle East After Iraq (by (author) Gwynne Dyer)

The Middle East as we have known it for the past ninety years is coming to an end, because the Americans will soon be leaving. President Bush is so determined to resist that conclusion that the legions will not finally depart until he has left office, but it is coming as surely as the sun sets in the west. And although Bush will leave defeated and disgraced, he has set events and emotions in train that will transform the region — if not quite in the way he intended.

Ali Allawi, defence minister in the first American puppet government in Baghdad, got it exactly right in a regional peace proposal he floated recently: “The Iraqi state that was formed in the aftermath of the First World War has come to an end. Its successor state is struggling to be born in an environment of crises and chaos. The collapse of the entire order in the Middle East now threatens as the Iraq imbroglio unleashes forces in the area that have been gathering in virulence over the past decades.”

Allawi is not exaggerating. The destruction of the Iraqi state and the subsequent defeat of U.S. military power there have finally destabilized the Middle East, a notional region that came into being after the collapse of the Ottoman empire in 1918 (though it did not become widely known as the “Middle East” until the Second World War). It was initially controlled by the British and French empires, who drew most of the borders, but a surge of revolutions in the 1940s and 1950s brought independence to the Arab countries. By then, however, both oil and Israel had made the region of great interest to the United States, which took over as the dominant power from the 1960s onwards. And under that American dispensation, there have been no further changes of regime for forty years, apart from the revolution in Iran in 1978 and the U.S. invasion of Iraq in 2003: the undemocratic regimes that were in power in 1967 are all still in power, within the borders that the European empires drew in 1918.

It is that Middle East that is now coming to an end. It is ending because defeat and humiliation in Iraq mean that soon there will no longer be the will in the United States to go on with the task of maintaining the status quo, and because the forces unleashed by the destruction of Iraq are going to overwhelm the status quo. Everything is now up for grabs: regimes, ethnic pecking orders within states, even the 1918 borders themselves might change. Five years from now there could be an Islamic Republic of Arabia, an independent Kurdistan, almost anything you care to imagine.

So what should the rest of the world do about this? Nothing. Just stand back and let it happen. Outsiders to the region have no solutions left to peddle any more (nor any credibility even if they did have solutions), and they no longer have the power or the will to impose their ideas. For the first time in a century, the region is going to choose its future for itself — and it may, of course, make a dreadful mess of it. Even then outsiders should not intervene, because foreign intervention generally makes things worse — but also because it’s none of their business.

For several generations the West has insisted that the Middle East is its business, because that is where half the world’s oil comes from. Radical change cannot be allowed there because it might interrupt the flow of oil, and so the region has remained politically and socially frozen for generations. But today every major oil-producing country in the Middle East depends on the cash flow from oil exports to feed its growing population, so they are all compelled to sell pretty much every barrel they can pump — and to sell it into a single global market that sets the price for buyer and seller alike. So it doesn’t matter to us who runs these countries.

It matters a great deal to their own people, of course, but the oil will go on flowing no matter who’s in charge, so it’s all the same to the customers. If the new regime is better than the old, good; if not, too bad. But it’s their business, not ours. There is the question of Middle Eastern terrorism, but Islamist extremism and the terrorism it breeds are both responses to a century of foreign domination and manipulation of the region. It wouldn’t all stop right away if the West ceased meddling in the area, but the resentment and humiliation that fuel it would dwindle rapidly. Just as well, because this is not a policy proposal; it is a prediction. The West will stop meddling in the region’s affairs, because the United States is going home hurt.

Finally, the question of Israel. The Middle East was definitely the wrong place to put a Jewish state if the idea was to create a safe haven for the world’s Jews, but that’s done now and the question is: Will Israel survive? The answer is probably yes, because it has and will retain the ability to take the entire region down with it in a nuclear Armageddon. But the opportunity of the 1990s has been wasted, and it probably faces another generation of confrontation — perhaps, this time, without the comforting support of the United States.

What we are seeing at the moment is a clear demonstration, both to the American and the Middle Eastern publics, of the inability of American military power to dictate outcomes in the region. Once that demonstration has been concluded, we shall see what comes out of the box in the Middle East.

It will undoubtedly be messy, since it will be a sudden thaw after centuries of political glaciation under Ottoman rule, Anglo-French domination, and American hegemony. In places, it will probably be bloody. The West will not like some of the regimes that emerge (but it’s still none of our business). In the long run, it will certainly be better for the peoples of the region than perpetual foreign tutelage. And it will not harm the West’s interests, so long as the oil continues to flow. Apart from that, the entire region is of little economic or strategic importance to the rest of the world. Lie back, and try to enjoy the ride.

"To understand what's really happening in Iraq, most of us could switch off the news and read Ignorant Armies instead."
—Vancouver Sun

Other titles by Gwynne Dyer

The Shortest History of War

From Hunter-Gatherers to Nuclear Superpowers — A Retelling for Our Times

the future of democracy (and work)

Crawling from the Wreckage

The Mess They Made (Revised Edition)