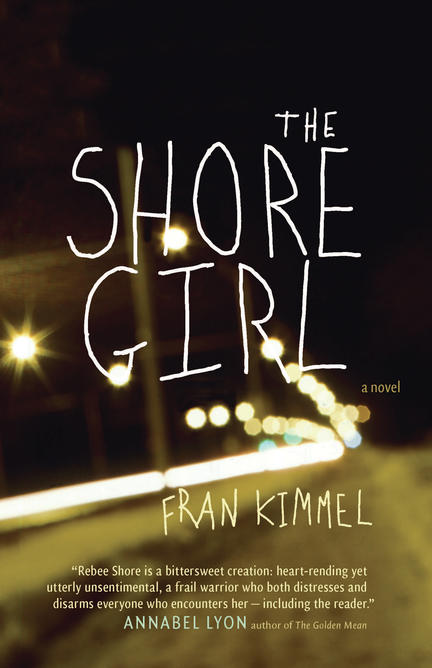 Rebee Shore’s life is fragmented. She’s forever on the move, ricocheting around Alberta, guided less than capably by her dysfunctional mother Elizabeth.

The Shore Girl follows Rebee from her toddler to her teen years as she grapples with her mother’s fears and addictions, and her own desire for a normal life. Through a series of narrators—family, friends, teachers, strangers, and Rebee herself—her family’s dark past, and the core of her mother’s despair, are slowly revealed.

The Shore Girl is a mosaic of Rebee: of her origins, of her past and present; from darkness and grief, to understanding and hope for a brighter future.

Praise for The Shore Girl
"Raw and heartbreaking.... Kimmel's debut will appeal to those who are drawn to dark, gritty family dramas, rife with vulnerable characters in turmoil."
~ Quill & Quire
"The Shore Girl's kooky yet realistic characters, true-to-life smells and sounds and scenes conjure up an unidealized world both familiar and alien. Like Harmony's van speeding through Wild Rose Country, it leads the reader into an in-depth examination of human emotions and motives."
~ Laurie Glenn Norris, Telegraph-Journal
"[Rebee's] life is constant chaos, a fact reinforced by the book's fractured narration.... Though she remains a mystery to nearly everyone who crosses her path, we gradually piece together Rebee's backstory and watch her mature, and The Shore Girl slowly unfolds its tragedy."
~ David Berry, National Post
"The Shore Girl is a surefire winner."
~ Catherine Ford, Calgary Herald

Fran Kimmel was born and raised in Calgary, Alberta. After graduating from the University of Calgary with a degree in Sociology, she worked an eclectic mix of jobs including youth worker, career counsellor, proposal writer, and a ten-year stint as a VP for a career consulting firm. Fran’s stories have appeared in literary journals across Canada and have twice been nominated for the Journey Prize. Fran currently lives in Lacombe with her husband and overly enthusiastic silver lab. The Shore Girl is her first novel.

Other titles by Fran Kimmel