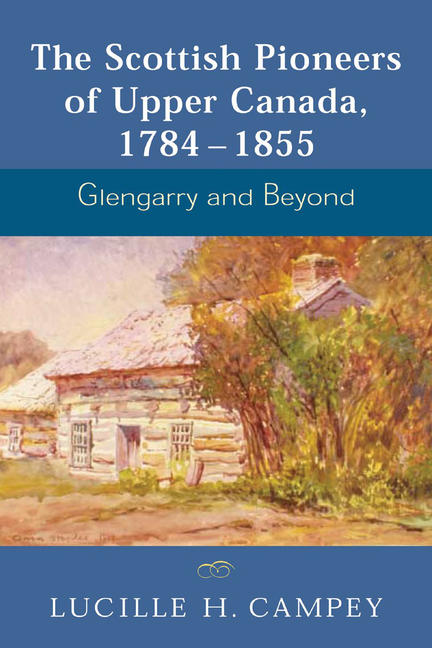 Glengarry, Upper Canada's first major Scottish settlement, was established in 1784 by Highlanders from Inverness-shire. Worsening economic conditions in Scotland, coupled with a growing awareness of Upper Canada’s opportunities, led to a growing tide of emigration that eventually engulfed all of Scotland and gave the province its many Scottish settlements. Pride in their culture gave Scots a strong sense of identity and self-worth. These factors contributed to their success and left Upper Canada with firmly rooted Scottish traditions.

Individual settlements have been well observed, but the overall picture has never been pieced together. Why did Upper Canada have such appeal to Scots? What was their impact on the province? Why did they choose their different settlement locations? Drawing on new and wide-ranging sources author Lucille H. Campey charts the progress of Scottish settlement throughout Upper Canada. This book contains much descriptive information, including all known passenger lists. It gives details of the 550 ships, which made over 900 crossings and carried almost 100,000 emigrant Scots. The book describes the enterprise and independence shown by the pioneers who were helped on their way by some remarkable characters such as Thomas Talbot, Lord Selkirk, John Galt, Archibald McNab and William Dickson. Providing a fascinating overview of the emigration process, it is essential reading for both historians and genealogists.

Scots were some of the provinces earliest pioneers and they were always at the cutting edge of each new frontier. They were a founding people who had an enormous influence on the province’s early development.

"I am happy to commend Lucille Campey’s latest book on Scottish settlement patterns in Canada. The product of meticulous research, The Scottish Pioneers of Upper Canada has much to offer both genealogists and general readers, as it weaves together statistical information, institutional histories and personal accounts to produce a fascinating picture of the multi-dimensional networks that underpinned the transatlantic movement and brought 100,000 Scots to Upper Canada during the seven decades reviewed. Persistent myths of helpless exile are challenged, as the preconditions and processes of emigration are analyzed, along with the cultural traditions imported by the 'trail blazers and border guards' who laid the foundations of Canada’s most populous province." - Marjory Harper, Reader in History, University of Aberdeen

"With a real feel for the sacrifice and the emotional turmoil of the pioneers, Lucille H. Campey has one again got her audience to face the raw heritage common to every Scots-Canadian. This is an excellent read, full of fascinating detail dug from much archival research. This book is another splendid addition to a series of much interest to both historians and genealogists." - Professor Graeme Morton, Scottish Studies Foundation Chair, University of Guelph

Ottawa-born Dr. Lucille Campey is a well-known writer and historian who began her career as a scientist and computer specialist, having obtained a degree in chemistry from Ottawa University. In 1967 she moved to England, where she gained a masters degree at Leeds University based on a study of English medieval settlement patterns. Inspired by interest in her Nova Scotia–born father’s Scottish roots and love of history, she studied Scottish emigration to Canada and was subsequently awarded a doctorate at Aberdeen University. Campey is the author of eight books on early Scottish emigration to Canada. More recently, Lucille has turned her attention to English emigration to Canada with her ninth book, Planters, Paupers and Pioneers. She lives near Salisbury in Wiltshire, England.

Other titles by Lucille H. Campey

A Fish and Timber Story

Planters, Paupers, and Pioneers / Seeking a Better Future / Ignored but not Forgotten

Ignored but Not Forgotten

The English Pioneers of Ontario and Quebec

The Scottish Exodus to Canada

With Axe and Bible

A Very Fine Class of Immigrants