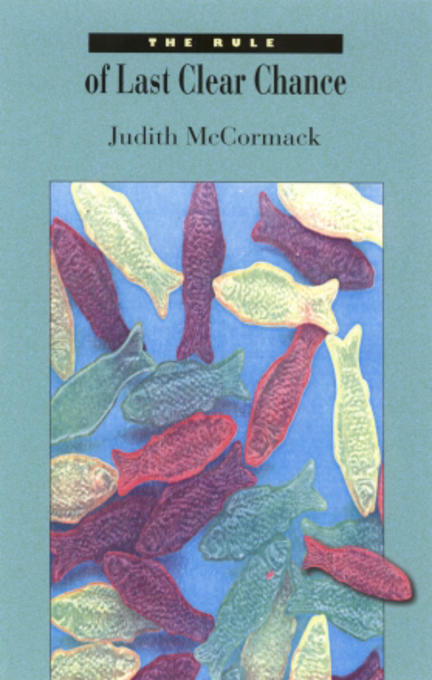 Fresh, imaginative, witty -- these have all been used to describe Judith McCormack's stories, gathered here in a powerful debut collection. Her offbeat characters, many of them lawyers, provide a lively look at the absurdities which lie beneath the skin of everyday life. A grocer who sells lobsters, a Cuban apothecary, a hapless thief, and a dreamy lawyer who navigates by smell are some of the people who fall in and out of trouble in these stories. The collection follows their restless attempts to find footing in a colourful but tricky landscape. All of this is detailed in language with a remarkable sense of cadence, punctuated with tart insights.

Judith McCormack's writing career has involved an unusually rapid trajectory. Her first short story was nominated for the 2000 Journey Prize. Her second story, `Plural`, won an honourable mention in The Fiddlehead's fiction contest, and has now been optioned for film by Genie-award-winning filmmaker Naomi McCormack. Her third story was published in Descant, and in 2001, she was one of three authors featured in the Coming Attractions anthology. A writer, a lawyer, a twin, and an insomniac -- for her, these things overlap. `Law is really about stories,` she says. `The idea of justice is a narrative, an elegantly twisted attempt to make sense of a haphazard world.` She should know -- she was recently awarded the Law Society Medal, the Ontario legal profession's highest honour. Judith lives in Toronto with her partner, Peter Dorfman, and their two children.

'[MCormack's] own language is sharply honed without being studied or precious -- perhaps some of her descriptions of smells are a little over the top, but those descriptions are almost a special case. Generally, her language doesn't call attention to itself in that way. To echo her character's thought about the word ''judging,'' McCormack's vocabulary is sinewy without being gelatinous. She also possesses another valuable tool of the writer, an analogical imagination -- she sees the relations between unlike things. In ''Plural,'' a story about twins, for example, she turns a laundry chute in a house into a very convincing metaphor for a birth canal. Finally, she captures the details of daily routine in a way that gives immense life to her narratives -- whether it's the banging of a venetian blind, caught in a breeze, against a window frame, or a man ''trying to put a glove on with one hand by trapping it against his side.'' '

'This is her debut collection, and I have to say I was pretty amazed by it. Her writing is just so -- it's witty and it's funny and it's very readable, she's got these wonderful little observations that just strike you as very humorous. She reminded me a lot of Carol Shields, actually. ... The wit, the pathos, the aptness of the images is just wonderful. ... She's amusing, she's witty, she's got a deft turn of phrase.'

'McCormack's prose resembles high realism in the way it adjusts reality into hyper-sharp focus. Smell is obviously important to McCormack and her descriptions create an almost animal-like heightened sense of reality. For instance, the protagonist in the title story compares the smell of the Highway Traffic Act to ''burnt sugar''.'

'McCormack emerges as a skilled storyteller unlike any I've encountered. The weightiness of themes -- good luck and bad, happiness and misery, chance and choice and responsibility -- is filtered pleasingly through the wry voice of a character in one story; another unfolds effortlessly, redolent with atmosphere and a detailed evoking of a period setting (19th century Havana) and manners. Seemingly random plotting gathers itself to a gentle burst of catharsis that beautifully integrates the whole.'

'The stories are rich with bang-on physical description, unforced natural dialogue and the telling particulars of daily life.... The Rule of Last Clear Chance is a collection of substance ... a debut to be savoured.'

'McCormack sets a new standard for short-story writing in this debut collection, and perhaps more importantly, for seeing life in all of its dimensions. We need more writers like her.'

'The Rule Of Last Clear Chance is an anthology of deftly written and somewhat askew short stories by Judith McCormack which offer the reader an engaging, entertaining, and rather different take on life. Among the many colorful characters are a lawyer who navigates by smell, a grocer who sells lobsters, and a hapless thief who should have (perhaps) chosen a life of white-collar crime instead. Double entendres, language slanted with a dash of the bizarre, and an abiding insight into the drives of human nature colour these unforgettable tales. The Rule Of Last Clear Chance documents Judith McCormack as a wonderfully and uniquely gifted storyteller!'

Other titles by Judith McCormack