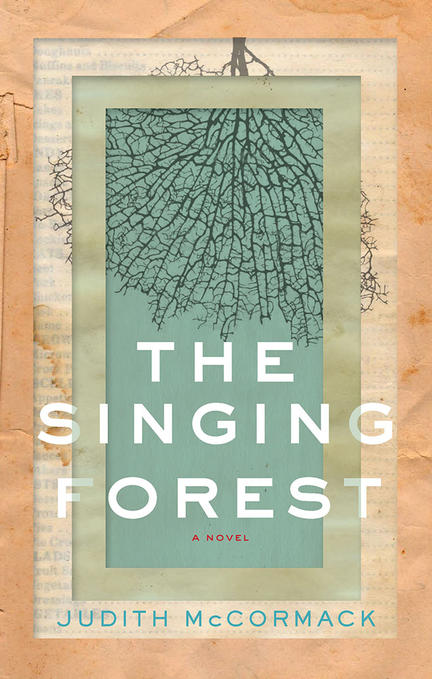 "The Singing Forest blends thought-provoking reflections on the moral reckoning of war crimes with ... a young woman’s attempts to decode her eccentric professional and personal families."—Alida Becker, New York Times

In attempting to bring a suspected war criminal to justice, a lawyer wrestles with power, accountability, and her Jewish identity.

In a quiet forest in Belarus, two boys make a gruesome find that reveals a long-kept secret: the mass grave where Stalin’s police buried thousands of murder victims in the 1930s. The results of the subsequent investigation—30,000 dead—has far-reaching effects, and across the Atlantic in Toronto, young lawyer Leah Jarvis finds herself tasked with an impossible case: the trial of elderly Stefan Drozd, a former member of Stalin’s forces, who fled his crimes in Kurapaty for a new identity in Canada. Though Leah is convinced of Drozd’s guilt, she needs hard facts. Determined to bring him to justice, she travels to Belarus in search of witnesses—and finds herself piecing together another set of evidence: her mother’s death, her father’s absence, the shadows of her Jewish heritage. Lyrical and wrenching by turns, The Singing Forest is a profound investigation of memory, truth, and the stories that tell us who we are.

Judith McCormack's writing career has involved an unusually rapid trajectory. Her first short story was nominated for the 2000 Journey Prize. Her second story, `Plural`, won an honourable mention in The Fiddlehead's fiction contest, and has now been optioned for film by Genie-award-winning filmmaker Naomi McCormack. Her third story was published in Descant, and in 2001, she was one of three authors featured in the Coming Attractions anthology. A writer, a lawyer, a twin, and an insomniac -- for her, these things overlap. `Law is really about stories,` she says. `The idea of justice is a narrative, an elegantly twisted attempt to make sense of a haphazard world.` She should know -- she was recently awarded the Law Society Medal, the Ontario legal profession's highest honour. Judith lives in Toronto with her partner, Peter Dorfman, and their two children.

Praise for The Singing Forest

"The Singing Forest blends thought-provoking reflections on the moral reckoning of war crimes with a warm, wry, almost Anne Tyler-esque depiction of a young woman’s attempts to decode her eccentric professional and personal families ... Leah's losses, her questions about her parents, are subtly contrasted with larger questions about truth and responsibility, especially when she flies off to conduct interviews in Minsk, 'where facts had been malleable for so long, where they had become saleable commodities.'"—Alida Becker, New York Times

"Moving hypnotically between present events and two motherless childhoods—Jarvis’s eccentric upbringing and the loveless brutality of Drozd’s—McCormack pulls off a little miracle. For much of the novel, we care about the monster. All this she accomplishes in sentences that wrap themselves around you."—The Walrus

"A brilliant stroke ... McCormack’s scope is impressive. The Singing Forest is a crime drama, a historical novel, and a character-driven work ... This novel posits that time does not heal all wounds. Recognition, reparation, and remembrance are urgent."—Quill & Quire

“Judith McCormack's The Singing Forest is probably the best Canadian novel, released this year, that you will read.”—John Delacourt, author of Butterfly

“By its searing and ambiguous finale, this startlingly humane novel has made an indelible impression.”—Michelle Schingler, Foreword (starred review)

"McCormack revives the secret, hovering between what’s buried and what’s above ground, what sings into a surreal blend. The forest whispers to silence the screams. The children are curious, the reader is curious, and McCormack cares ... A page-turner with substance, where troubled family trees testify, find new growth, and branch out."—Miramichi Reader

"The novel’s twin storylines are beautifully written, and reach a profound and unsettling moral clarity."—Maclean's

“There is nothing bleak or drained of life in The Singing Forest, despite such harrowing scenes. The energy of the prose does not falter, transcending the expectations—if not the limitations—of a crime drama ... the scope of McCormack’s ambition is nothing less than a poetic meditation on the mutability of identity, and with The Singing Forest, she succeeds.”—Ottawa Review of Books

"The Kurapaty mass grave near Minsk, Belarus, was used to hide the bodies of thousands murdered by Stalin’s secret police from 1937 to 1941 ... searingly, as McCormack writes, there are the voices of the dead who cry out, 'We are here. We are waiting.' Know this history through your heart, through the empathetic imagination of McCormack’s fiction."—Kim Echlin, author of The Disappeared

"In this hypnotically layered novel, a young Jewish lawyer, Leah Jarvis, is assigned the case of Stefan Drozd, a nonagenarian war criminal facing deportation for acts he committed as a minor in Belarus. McCormack treats her characters with unnerving fairness, balancing terror with beauty, a brutal childhood with an odd and loving one, and somehow squeezing out of the reader sympathy for Drozd—until horror precludes it. Deeply intelligent and deeply moral, The Singing Forest shows that, like glass, truth is amorphous. It also makes the case that, though 'there is no general duty to rescue' in law, a family might save a child, as it did Leah. Or it may, like Drozd, make a monster of him."—Caroline Adderson, author of A History of Forgetting and A Russian Sister

“Sometimes, as a reader, you put down a book in wonder, because you have been inside the mind of a deep and seeing writer, whose vision of the world is captivating, original and illuminating. Such a writer is Judith McCormack. In vibrant and nuanced language McCormack spirals us into the heart of a war criminal, and the brilliant lawyer who unravels the workings of his mind. Dark, disturbing, dazzling—this is an unflinching look at evil—and yet, and here is McCormack’s genius, we emerge more whole. The Singing Forest is an absolute triumph!”—Shaena Lambert, author of Petra and Oh, My Darling/

“McCormack emerges as a skilled storyteller unlike any I’ve encountered. The weightiness of themes—good luck and bad, happiness and misery, chance and choice and responsibility—is filtered pleasingly through the wry voice of a character in one story; another unfolds effortlessly, redolent with atmosphere and a detailed evoking of a period setting and manners. Seemingly random plotting gathers itself to a gentle burst of catharsis that beautifully integrates the whole … [McCormack] is a rare bird.”—Jim Bartley, Globe and Mail

“Judith McCormack writes with the fluidity and confidence of a natural, and her stories are a joy to read.”—Nino Ricci, author of The Origin of the Species

“[McCormack’s] language is sharply honed without being studied or precious.”—Phillip Marchand, Toronto Star

“Though it starts with a fire, the appeal of [Backspring] is its style of depicting aftermath, which is understated despite high emotional tension. It’s akin to the scent of smoke that bothers Eduardo during anxious moments in the months following the blast. A novel of precariousness—in love and life—set in a Montreal mosaic of French, English and les autres.”—Jade Colbert, Globe and Mail

“A well-written and smart novel that unfolds many moments of profound and subtle beauty. McCormack’s treatment of details and prose are refreshing, confident, and attentive.”—Burgess McGregor, Winnipeg Review

Other titles by Judith McCormack

The Rule of Last Clear Chance