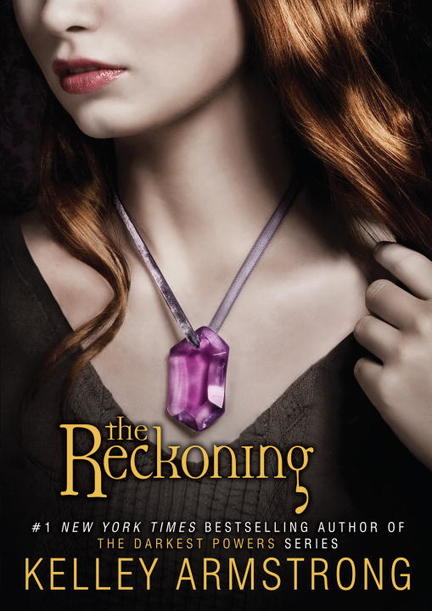 Only two weeks ago, life was all too predictable. But that was before I saw my first ghost. Now along with my supernatural friends Tori, Derek, and Simon, I'm on the run from the Edison Group, which genetically altered us as part of their sinister experiment. We're hiding in a safe house that might not be as safe as it seems. We'll be gone soon anyway, back to rescue those we'd left behind and take out the Edison Group . . . or so we hope.


AFTER FOUR NIGHTS ON the run, I was finally safe, tucked into bed and enjoying the deep, dreamless sleep of the dead . . . until the dead decided they’d really rather have me awake. It started with a laugh that slid into my sleep and pulled me out of it. As I rose on my elbows, blinking and struggling to remember where I was, a whisper snaked around me, words indistinguishable.

I rubbed my eyes and yawned. Dull gray light shone through the curtains. The room was silent and still. No ghosts, thank God. I’d had enough in the last few weeks to last me a lifetime.

A scrape at the window made me jump. These days, every branch scratching the glass sounded like a zombie I’d raised from the dead, clawing to get in.

I went to the window and pulled back the curtains. It’d been nearly dawn by the time we got to the house, so I knew it had to be at least midmorning, but the fog outside was so thick I couldn’t see anything. I leaned closer, nose pressed to the cold glass.

A bug splattered against the window and I jumped a foot in the air. A laugh sounded behind me.

I whirled, but Tori was still in bed, whimpering in her sleep. She’d thrown off the covers and was curled up on her side, her dark hair spiked across the pillow.

Another chuckle erupted behind me. Definitely a guy’s laugh. But no one was there. No, strike that. I just couldn’t see anyone. For a necromancer, that doesn’t mean no one is there.

I squinted, trying to catch the flicker of a ghost and saw, off to the left, the flash of a hand that was gone before I could see more.

“Looking for someone, little necro?”

A snicker answered me—the kind of snicker every fifteen-year-old girl has heard a million times from jerk boys.

“If you want to talk to me, you have to show yourself,” I said.

“Talk to you?” he said in an arrogant high school quarterback voice. “I think you’re the one who wants to talk to me.”

I snorted and headed back to bed.

“No?” His voice slid around me. “Huh. I figured you’d want to know more about the Edison Group, the Genesis experiments, Dr. Davidoff . . .”

He laughed. “Thought so.”

The four of us—Tori, Derek, Simon, and me—were on the run from the Edison Group after discovering we were subjects in the Genesis project, an experiment for genetically modifying supernaturals. My aunt Lauren had been one of the doctors involved, but she’d betrayed her colleagues by helping us get away. Now she was being held captive. Or so I hoped. Last night, when the Edison Group tracked us down, a ghost had tried to help me . . . a ghost who had looked like Aunt Lauren.

We were supposedly in a safe house owned by a group opposing the experiments. Now a teenaged ghost showed up, knowing about the project? I wasn’t about to banish him, however tempting it might be.

“Show yourself,” I said.

“Bossy little necro, aren’t you?” His voice slid behind me. “You just want to see if I’m as hot as I sound.”

I closed my eyes, pictured a vague male form, and gave a mental tug. He began to materialize—a dark-haired guy, maybe sixteen, seventeen, nothing special, but with a smarmy smile that said he thought he was. I could still see through him, like he was a hologram, so I closed my eyes to give him another pull.

“Uh-uh,” he said. “You want more, we gotta get to know each other a little better.” He disappeared again.

He whispered in my ear. “Like I said, to get to know you better. Not here, though. You’ll wake your friend. She’s cute, but not really my type.” His voice moved to the door. “I know a place we can chat in private.”

Yeah, right. Did he think I’d just started talking to ghosts yesterday? Well, close—two weeks ago, actually. But I’d already seen enough to know that while there were some ghosts who wanted to help and some who just wanted to talk, there were more who wanted to cause a little trouble, spice up their afterlife. This guy definitely fell in the last category.

Still, if he was another Edison Group subject, one who’d presumably died in this house, I needed to find out what had happened to him. But I wanted backup. Tori had no experience helping me with ghosts and, while we were getting along better, she still wasn’t anyone I wanted watching my back.

So I followed the ghost into the hall, but stopped at Simon and Derek’s door.

“They’d like to talk to you, too.” I raised my voice, praying Derek would hear me. He usually woke at the slightest noise—werewolves have superhearing. All I could hear, though, was Simon’s snores. There was no one else upstairs. Andrew, the guy who’d brought us here, had taken the downstairs bedroom.

“Come on, necro girl. This is a limited-time offer.”

You know he’s up to no good, Chloe.

Yes, but I also needed to know if we were in danger here. I decided to proceed with extreme caution. My subconscious voice didn’t argue, which I took as a positive sign.

We’d gone straight to bed after we got here, so I hadn’t gotten a good look at our new place. I only knew that it was huge—a rambling Victorian straight out of a Gothic horror movie.

As I followed the voice down the hall, I had the weird sense I was in one of those movies, caught in an endless narrow corridor, passing closed door after closed door until I finally reached the staircase . . . heading up.

From what I’d seen of the house as we’d driven up, it was three stories. The bedrooms were on the second floor, and Andrew had said the third was an attic.

So the ghost was leading me to the dark, spooky attic? I wasn’t the only one who’d seen too many horror films.

I followed him up the stairs. They ended at a landing with two doors. I paused. A hand appeared through the door in front of me, beckoning. I took a second to prepare myself. No matter how dark it was in there, I couldn’t let him see my fear.

When I was ready, I grabbed the doorknob and—

It was locked. I turned the dead bolt latch and it clicked free. Another deep breath, another second of mental preparation, then I swung the door open and stepped in—

A blast of cold air knocked me back. I blinked. Ahead, fog swirled.

A dead bolt on an attic door, Chloe?

No, I was standing on the roof.

"There's never a slow moment in their journey or a false line in Armstrong's writing."
— Charlaine Harris, author of Dead to the World
"Kelley Armstrong has created a gritty, realistic world both teen and adult readers will enjoy. Edge-of-the-seat reading, with plenty of surprises. I want the next installment now!"
— Kim Harrison, author of White Witch, Black Curse

In the previous books in the Darkest Powers series (The Summoning and The Awakening), Chloe Saunders and her friends have discovered their supernatural powers, been locked away as mentally ill by the Edison Group (which endowed them with their powers in the first place) and have escaped to what they consider a sanctuary.

They think they have finally found a safe haven with Andrew, a trusted friend of Derek’s and Simon’s father. But not everything is what it seems. The Edison Group is still desperately searching for them. When another attempt is made to capture and kill Derek, Chloe wonders if they can trust Andrew. Chloe finally gets to go on a first date with Simon, but their romantic interlude is cut short with the arrival of two werewolves determined to raise havoc.

Kelley Armstrong’s latest novel, The Reckoning, delivers a satisfying conclusion to her first young adult trilogy. This third instalment keeps the reader enthralled from the very first sentence. The pacing of this novel is superb with a tightly woven plot and characters that truly jump off the page.

This series is for anyone who enjoys adventure, mystery, a little romance and a healthy dose of the macabre. I have recommended this series to several boys at my school who have told me how much they enjoyed Armstrong’s dark and suspenseful writing style. Both boys and girls would equally enjoy this terrific trilogy.

In this third instalment of the Darkest Powers trilogy, Chloe and her friends are on the run from the Edison Group, the people responsible for their genetic alterations. Hoping to take out the Edison Group, they must return to save those they left behind. As Chloe becomes more comfortable with her powers as a necromancer, her feelings for Derek, a werewolf, begin to develop.

So far, Tori, Chloe, Simon and Derek are in a safe house - but will it be safe for them as they are different? The Edison Group is still after them, will they be able to unite and save themselves or will it fall apart?

Chloe has special powers, but not know what or how to use them. Her friends are 'special' and will she be able to figure out how she feels towards Simon and Derek and will that affect the group dynamics. Guess you will have to read to find out what zombies are and who is in charge. he he