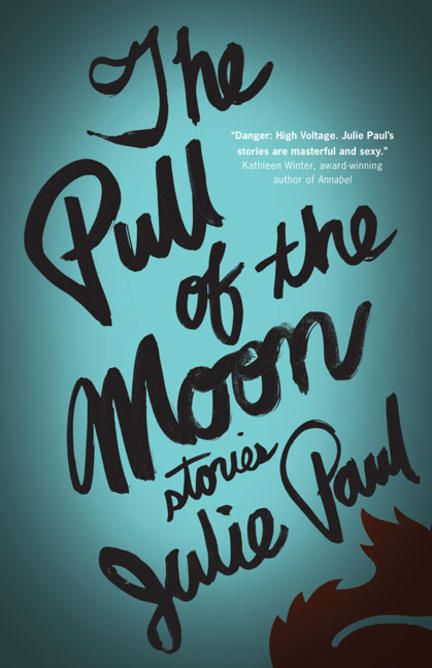 Twelve short stories that examine what happens in the lives of characters who discover shocking truths about the people they thought they knew best.

Whether set in a cottage or a Montreal market, a graveyard or a backyard, these stories transport you into the lives of people you’ll recognize. Your neighbours may not want to make squirrels into pets or sell you a piece of the moon. Your son may not be asked to donate sperm to his girlfriend’s mother. Your sister may not want you to bring a dead cat across the border. You may not have an imaginary husband, a secret brother, or a friend who has turned to murder in a custody battle. But in each of these stories, people are trying to figure out how to live in a world that doesn’t always seem hospitable.

With her keen poet’s eye, Julie Paul examines human nature and animal instinct, as the characters in The Pull of the Moon try to negotiate their impulses and desires. Ultimately, they want what most of us want: connection, belonging, love, and forgiveness.

Julie Paul is the author of The Jealousy Bone and The Pull of the Moon. Her stories, poems, and essays have been published in numerous journals, including the New Quarterly, the Malahat Review, the Fiddlehead, the Dalhousie Review, Geist, and Canadian Living, and in the anthologies Coming Attractions 07 and Women Behaving Badly. Learn more about Julie at juliepaul.ca.

"Paul’s voice is a strong one, and her characters a worthy study. Add to this The Pull of the Moon’s surprising cohesion, its weave of both obvious and deeply buried repeating themes and images, and the result is a collection worth noting." —FreeFall Magazine

Governor General Award Winner Arleen Paré chose The Pull of the Moon as her holiday gift pick for the Ottawa Citizen.

"This is writing of emotional veracity with an edge, of humour alongside gravity, of darkness tempered with blithe optimism. The pull of Julie Paul is powerful." —Rover

Julie Paul's The Pull of the Moon wins the City of Victoria Butler Book Prize, a $5,000 prize from the Victoria Book Prize Society.

"The Pull Of The Moon isn’t a world of straightforward happy endings. It’s a world where nothing is perfect, and people must learn to live with each other, despite their loved one’s complex flaws. Julie Paul’s Pull Of The Moon consistently succeeds in portraying such a world, thanks to Paul’s ability to capture both the warmth and the strangeness of the way people behave." —The Winnipeg Review

The Pull of the Moon awarded the Bronze Medal for Short Story Fiction by the 2015 Independent Publisher (IPPY) Awards.

"Julie Paul surveys the minutiae of human relationships with a sharp and quizzical eye." —The Coastal Spectator

"Julie Paul's wistful, charming stories—full of humour and subtle revelations—strike gently but powerfully at the heart. The Pull of the Moon is a delight." —Shaena Lambert, author of Oh My Darling

"The stories are good, and true to the title, they’ve got that quality of lunar tug that makes one feel a little under the influence of something bigger than themselves." —Jill Margo Mini Mag

For Rob McLennan's 12 or 20 Second Series, Julie Paul fills us in on how she overcomes writers' block, the importance of being able to move freely between genres, and much more.

"The stories in The Pull of the Moon range from funny-sexy through funny-grim to outright harrowing. They are all good . . . Between Paul’s range and virtuosity, most readers will find something to glom onto. Simply put, this is a good collection of short stories and well-worth a read. " —The Other Press

"Paul is both a superb story teller and a fine poet. She wastes no words. Her characters are believable, sympathetic — and highly unusual. These twelve stories are funny — often very funny — but they tingle with human longing and fear . . . You’ll want to buy this one for your friends. And then borrow it back." —Arleen Paré, award-winning author of Lake of Two Mountains

"[The Pull of the Moon] is a reminder that we are dealing with humans and human behaviour seen up close: funny, sad, inadequate, tragic, venal, conflicted, desperate, sometimes even noble. This particular cartography is often entertaining, frequently disturbing, and always illuminating." —The Coastal Spectator

"The Pull of the Moon is a collection laced with surprises and deftly woven moments of wonder. Julie Paul's is a world where families, friendships, and relationships fall apart, and where desperate people struggle to put them back together." —Daniel Griffin, author of Stopping for Strangers

"Despite their trials and challenges, Paul’s characters ... are fully drawn, open, and sensitive to the detailed beauty of the world around them. Dialogue is fresh and believable. Humour is never far away. And it’s testament to the author’s skill that she knows when and how to end each story. Some endings may leave you gently puzzled—those who need tidy, wrapped-with-a-bow explanations for everything, beware — but mostly you will find yourself thinking, deeply, about how things might play out and how, at heart, we’re all part of one big crazy family, trying to do the best we can." —Rhonda Batchelor, reviewing for the Greater Victoria Public Library

"The through-line in Julie Paul’s second collection of stories is a small yet powerful transformation in character: in each, a person feels the near-physical pull of something outside themselves. . . Collections can be hit-and-miss affairs. This one is thoroughly good." —Globe and Mail

Following Julie Paul's win at the Victoria Book Prizes, Will Johnson of Literary Goon asks her about her book, her inspiration, and how writing non-human characters adds to her narrative.

"Modern short stories can be plotless, pretentious and downright irritating. This isn’t a problem with the work of [Julie] Paul, who writes insightful and entertaining stories, often with a West Coast connection. Her male central characters tend to be good men felled by grief. Her women can be loopy and fanciful. This new collection of 12 stories doesn’t disappoint." —The Toronto Star

"[It] explores what you might find when you scratch beneath the surface of someone else's life . . . There is genuine humanity and insight that leads to understanding." —y.a.m. Magazine

Other titles by Julie Paul

Rules of the Kingdom

The Rules of the Kingdom