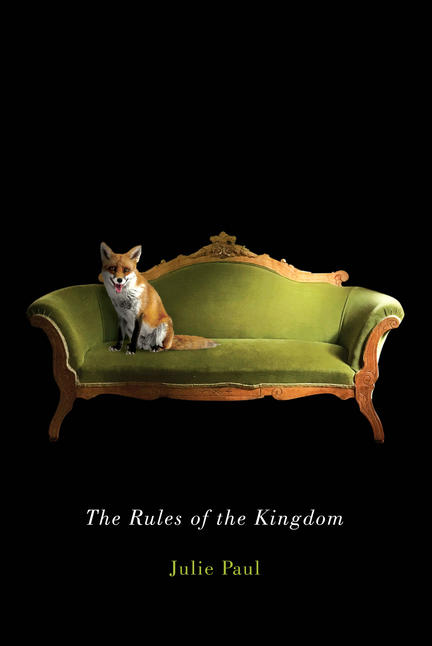 To seek belonging, to strain against the familiar – these are the polarities many of us live between, feeling the pull of each desire. Offering a particular history, an intimate vantage point from within the various kingdoms we inhabit, Julie Paul’s The Rules of the Kingdom is an exploration of this struggle on a personal level and a universal one.

Broken into five sections, the book examines the human struggle to find meaning, comfort, and a sense of home. In “Settlers’ Descendant Reclaims the Past,” the poems consider rural life, both the specific and the collective, including a village’s destruction by fire. In “Weight of the Word” the focus turns to family of origin, religion, and rites of passage. Poems take a familial tack again in “Cleavage,” wherein Paul dives into the waters of motherhood, and they drift into further intimacy in “The World’s Smallest Republic,” a series of poems about sex, love, and marriage. Finally, the poems in the fifth section, “Next Time the World Will Burn,” explore our place in the twenty-first century and offer some idiosyncratic suggestions on how to live.

At turns humorous, playful, contemplative, and coy, the poems in The Rules of the Kingdom question the vagaries of faith and family but ultimately celebrate life and love.

Julie Paul is the author of The Jealousy Bone and The Pull of the Moon. Her stories, poems, and essays have been published in numerous journals, including the New Quarterly, the Malahat Review, the Fiddlehead, the Dalhousie Review, Geist, and Canadian Living, and in the anthologies Coming Attractions 07 and Women Behaving Badly. Learn more about Julie at juliepaul.ca.

Other titles by Julie Paul

The Rules of the Kingdom

The Pull of the Moon