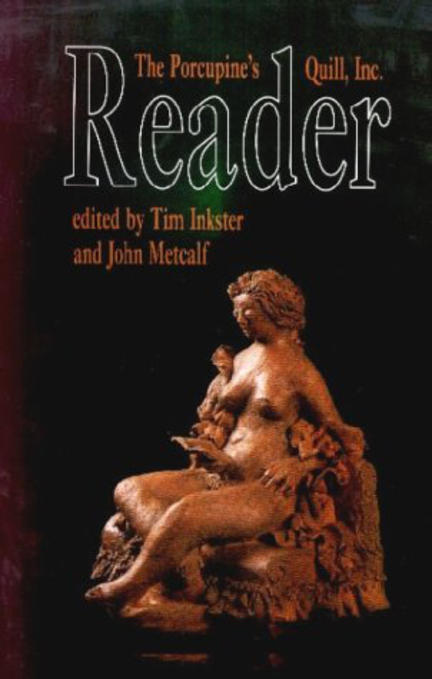 'The Porcupine's Quill Reader celebrates and promotes the work of a small publishing house in the village of Erin, Ontario. The fact that authors published here have had four Governor General Award nominations in four years suggest that editor John Metcalf and publisher Tim Inkster must be doing something right. The Reader contains 20 short stories and assorted gossipy anecdotes and photographs of the authors giving readings and socializing. (And yes, this creates a feeling of being the voyeur at the family picnic, and yes, you might wonder why you would want to be a voyeur there of all places.) Inkster has long been known for quality book design and treats readers to brief arcane chats about typeface selection and paper size. Interesting if you like knowing why some books look and feel so much better than others, easy to skip if you don't.'

John Metcalf is one of Canada's most distinguished literary editors, writers, critics, and anthologists. He has helped shape the sensibility of an entire group of emerging writers through his work at the Porcupine's Quill press. Known for his strong views about literary standards, Metcalf has nurtured some of our most essential writers, including Leon Rooke, Russel Smith, Terry Griggs, Caroline Adderson, Annabel Lyon, Andrew Pyper, Steven Heighton, Jane Urquhart, Elise Levine, Clarke Blaise, Michael Winter, and Mary Swan, among dozens of other fine authors.John Metcalf is the Senior Editor of Porcupine's Quill. An accomplished writer, editor, and anthologist, he is the author of more than a dozen works of fiction and non-fiction including "Adult Entertainment, The Lady Who Sold Furniture", and "Kicking Against the Pricks: Essays".

Tim Inkster`s proudest moment, as a poet, was the inclusion of "In Search of Eldorado" (from A Crown Prince Waits for a Train) in the 1975 edition of the Penguin Book of Canadian Verse edited by Ralph Gustafson. His most recent collection was Blue Angel (Black Moss, 1981) after which he stopped writing poems in favour of a career in the book publishing industry. The Crown Prince Waits for a Train is one of only two Porcupine`s Quill publications from the 1970s that are still available in the original edition, at the original price.

Other titles by John Metcalf

Light Shining Out of Darkness

Shut Up He Explained

Other titles by Tim Inkster

The Crown Prince Waits for a Train