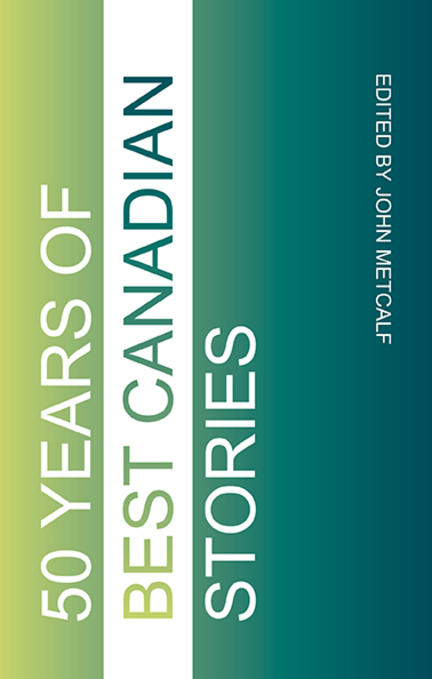 A celebration of fifty years of Best Canadian Stories

Now in its fiftieth year, the Best Canadian Stories series has long championed the short story form and highlighted the work of many writers who have gone on to shape the Canadian literary canon. Margaret Atwood, Clark Blaise, Tamas Dobozy, Mavis Gallant, Douglas Glover, Norman Levine, Rohinton Mistry, Alice Munro, Leon Rooke, Diane Schoemperlen, Kathleen Winter, and many others have appeared in its pages over the decades, making Best Canadian Stories the go-to source for what’s new in Canadian fiction writing for close to five decades. Selected from the series' wide-ranging list of contributors by editor John Metcalf, Fifty Years of Best Canadian Stories celebrates half a century of the country's best short fiction.

John Metcalf is one of Canada's most distinguished literary editors, writers, critics, and anthologists. He has helped shape the sensibility of an entire group of emerging writers through his work at the Porcupine's Quill press. Known for his strong views about literary standards, Metcalf has nurtured some of our most essential writers, including Leon Rooke, Russel Smith, Terry Griggs, Caroline Adderson, Annabel Lyon, Andrew Pyper, Steven Heighton, Jane Urquhart, Elise Levine, Clarke Blaise, Michael Winter, and Mary Swan, among dozens of other fine authors.John Metcalf is the Senior Editor of Porcupine's Quill. An accomplished writer, editor, and anthologist, he is the author of more than a dozen works of fiction and non-fiction including "Adult Entertainment, The Lady Who Sold Furniture", and "Kicking Against the Pricks: Essays".

“Best Canadian Stories ... combines both emerging and established voices for a fascinating glimpse at the most exciting short fiction coming out of this country.”—Open Book

Other titles by John Metcalf

Light Shining Out of Darkness

Shut Up He Explained