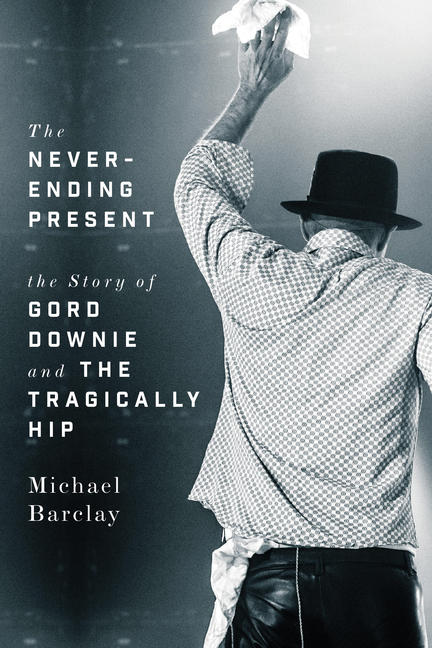 Shortlisted for the 2019 Speaker’s Book Award

“Barclay combines his admiration of the band with his knowledge of the music industry to make a clever, touching, and very informative book that may well be the definitive work on an important piece of Canadian pop culture.” — Publishersweekly.com, starred review

In the summer of 2016, more than a third of Canadians tuned in to watch what was likely the Tragically Hip’s final performance, broadcast from their hometown of Kingston, Ontario. Why? Because these five men were always more than just a band. They sold millions of records and defined a generation of Canadian rock music. But they were also a tabula rasa onto which fans could project their own ideas: of performance, of poetry, of history, of Canada itself.

In the first print biography of the Tragically Hip, Michael Barclay talks to dozens of the band’s peers and friends about not just the Hip’s music but about the opening bands, the American albatross, the band’s role in Canadian culture, and Gord Downie’s role in reconciliation with Indigenous people. When Downie announced he had terminal cancer and decided to take the Hip on the road one more time, the tour became another Terry Fox moment; this time, Canadians got to witness an embattled hero reach the finish line.

This is a book not just for fans of the band: it’s for anyone interested in how culture can spark national conversations.

Co-author of Have Not Been the Same, Michael Barclay is the Associate Editor of Exclaim! Magazine, a national free monthly devoted to underground music. He is also a contributing writer to Toronto’s eye Weekly and a freelance writer and broadcaster. Between 1993 and 1999 he was the Music Editor of Southwestern Ontario’s Id Magazine and played keyboards in the band Black Cabbage. Michael lives in Toronto, Ontario.

“Barclay combines his admiration of the band with his knowledge of the music industry to make a clever, touching, and very informative book that may well be the definitive work on an important piece of Canadian pop culture.” — Publishersweekly.com starred review

“The Never-Ending Present climaxes with that exclamation mark, that night in August 2016, and even though the material borrows heavily from Barclay’s in-depth reporting and the time for Maclean’s, I minded little; it was appointment reading for me then, and it is a full and evocative accounting of the occasion now. It helps to explain why an event that had every reason to seem sad and funereal instead ended up indeed feeling like ‘a national celebration.’” — Literary Review of Canada

“Woven from a vast range of secondary sources as well as new interviews with crucial figures in the band’s community and orbit, shot through with both a critic’s rigour and a fan’s fervour, it’s a book fully worthy of its beloved subjects’ unique place in the Canadian firmament.” — Montreal Gazette

“Barclay’s remarkable chronicle of the Tragically Hip is as wide as it is deep. He sets down their story with a historian’s care and an artist’s rambling curiosity, revisiting each note with wit, expertise and so much heart. It's eminently readable, clever and funny — what an achievement.” — Sean Michaels, Giller Prize-winning author of Us Conductors

“Laying out the history of the band from the early years of its members and its founding in Kingston in the 1980s through to Downie’s final weeks, The Never-Ending Present is indeed as definitive a work on the band as anything that exists, and stands on its own against last year’s excellent documentary of the band, Long Time Running.” — Winnipeg Free Press

Other titles by Michael Barclay

11 Life Stories To Read This Spring

This assortment of memoir, biography, and autobiography brings real life to the page, and into the minds of readers.