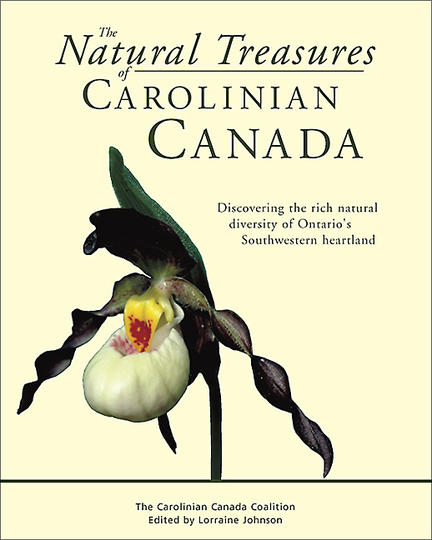 Sweeping from Toronto to Lake Huron and Lake Erie is a region of biological richness unmatched in Canada. Here the native trees have unusual names -- Sassafras, Cucumber Magnolia, Tulip-tree, Black Walnut, Pawpaw -- evoking the distinctly southern character for which the region is named.

The zone is also home to dozens of species of plants, grasses and wildflowers, as well as animals, birds, fishes and mussels, amphibians and reptiles, butterflies, dragonflies and other insects not found elsewhere in Canada.

The Carolinian region is only a quarter of a percent of the country's total land area, but close to one-third of Canada's rare and endangered plants and animals live here. So does more than a quarter of the country's population. Many unique species depend on the region's distinctive habitats, many of them also in jeopardy. The Carolinian landscape is one of the most threatened in North America.

This book is a labour of love for the contributors, naturalists and scientists who share their knowledge of the diverse richness and rarity of the species and spaces in Carolinian Canada through engaging and informative text.

After three decades of gardeningand almost as long writing about itLorraine Johnson still gets excited (and unrealistic!) every spring about the amount of space she has in her small city frontyard and backyard. So she regularly scrounges space from others: in community gardens, at family members houses, even city parks Her interests are mainly in the ways that growing plants (for food, for environmental benefits) nurtures the good in ourselves and the world. She views gardening as a deep and meaningful conversation with the planet. Johnson was the president of the North American Native Plant Society and is the author of numerous books on gardening and environmental issues, including The New Ontario Naturalized Garden, The Gardeners Manifesto, and City Farmer: Adventures in Urban Food Growing. Lorraine is much-in-demand throughout North America as a garden speaker on native plants. She currently lives in Toronto.

Other titles by Lorraine Johnson

A Garden for the Rusty-Patched Bumblebee

Baxter and the Blue Bunny

For American Gardens in Temperate Zones