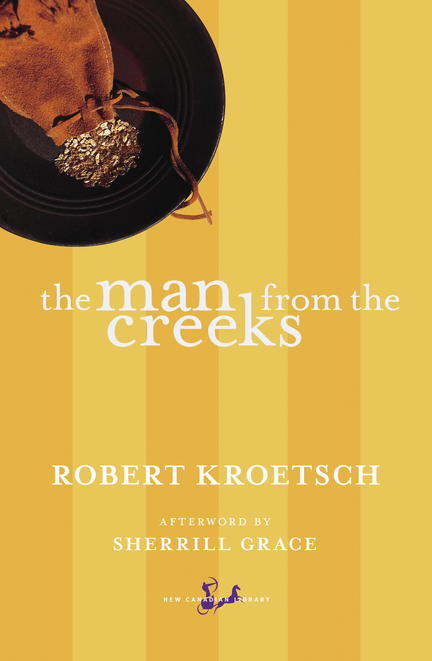 Set against the Klondike Gold Rush of the 1890s, The Man from the Creeks is a gripping tale of three entrepreneurs desperate to strike it rich. Fourteen-year-old Peek and his mother, Lou, join up with cooper Benjamin Redd and embark on a treacherous journey to fabled Dawson City. First published in 1998, this is a witty and ribald retelling of Robert Service’s incomparable “The Shooting of Dan McGrew.”

Robert Kroetsch was a teacher, editor and award-winning writer. Born in Heisler, Alberta, in 1927, Kroetsch grew up on his parents' farm and studied at the University of Alberta and the University of Iowa. He taught at the State University of New York, Binghamton, until the late 1970s and then returned to Canada, where he taught at the University of Calgary and the University of Manitoba from the 1970s through the 1990s. Kroetsch also spent time at the Saskatchewan Summer School of the Arts and many writer-in-residencies, where he powerfully influenced recent writing on the Canadian prairies and elsewhere. His generosity of spirit and openness to the new showed many authors new ways to pursue their own kinds of writing. In honour of both his writing and his contributions to Canadian culture in general, Kroetsch was made an Officer of the Order of Canada in 2004. In 2011 he received the Lieutenant Governor of Alberta Distinguished Artist Award. Robert Kroetsch died in a car accident outside of Edmonton, Alberta, in 2011.

Excerpt: The Man from the Creeks (by (author) Robert Kroetsch; afterword by Sherrill Grace)

Up there in the lifeboat where we were hiding we could smell the loaves of fresh bread and the pans of baking-soda biscuits, set outside the galley door to cool in time for breakfast. But, worse yet, we could almost taste the freshly baked cinnamon rolls.

Back in Seattle we’d stowed away in something of a hurry. Somehow we got into a lifeboat directly above the steamer’s galley. As a result, our diet of hardtack and equally hard cheese and stale water got to be less than exciting. Not that my mother’s salary of five dollars a week would have bought us much else.

After eight days in that lifeboat we could smell fresh food right through the canvas and wood, and that in spite of the fire bucket at our feet that was our toilet.

The real trouble, though, was my birthday. That ninth morning was the morning of my fourteenth birthday. October 24, 1897. That was three months and a week after the gold rush began.

My mother got it into her head that I deserved a birthday treat.

“Please don’t risk it,” I said. I was pleading, but I tried to sound logical.

“It’s a bit late,” she said, “to start telling me what I should risk.”

Every stampeder on the Delta Queen was so preoccupied with getting to the Klondike goldfields that my mother really believed she could crawl down from our lifeboat, swipe some cinnamon rolls and carry them back up to me as a birthday present without getting caught. To clinch her argument she pointed out that the sun wasn’t yet above the horizon.

The Queen was three days late on a voyage that was scheduled to take five, and still Skagway was nowhere in sight. We were somewhere in the Inside Passage, south of Skagway, north of Juneau. We knew that much. The old tub was leaking like a sieve. It was running out of coal too, but that was not the immediate problem. The problem was our having to proceed at only half-speed or sink.

The Klondike gold strike had started up such a flutter of greed that people were willing to buy tickets on anything that promised to float in a northerly direction. My mother had hoped that a four-day food supply would take us the thousand miles to Skagway, and then luck would take us up over the Coastal Range and down the Yukon River. After that all we’d have to do was figure out how to carry home our bags of gold.

Instead of taking two cinnamon rolls, my mother picked up a pan of twelve that was intended, it turned out, for the captain’s cabin.

She slid the pan under the coat she carried over her left arm. It was too chilly and too damp for anyone to be carrying a coat on one’s arm instead of wearing it. But that wasn’t the giveaway. The rolls were so fresh the smell caught the attention of one of the pastry cooks, a big, tough customer who was on his way back to the galley from the head. Most of the people on that boat, what with the water system out of commission half the time, didn’t smell like cinnamon rolls fresh out of the oven.

“Up with the birds I see,” the cook said.

Little did he know what he was saying. We were up with the gulls, directly over his head.

Passengers were supposed to be asleep at that hour on the old steamer. But a lot of them had developed the habit of standing at the rail and staring toward the horizon, cursing while they did it. And some didn’t have cabins to begin with.

The cook was waiting for a response.

“Just who do you think you are, lady?”

Just like that. That was the name she gave herself, as if she’d picked it up with the pan that was warming her forearm.

That’s what the poet called her, later, when he wrote his famous poem.

Other titles by Robert Kroetsch

Sketches Toward a Self-Portrait

As for Me and My House

The Hornbooks of Rita K

The Long Poems of Robert Kroetsch