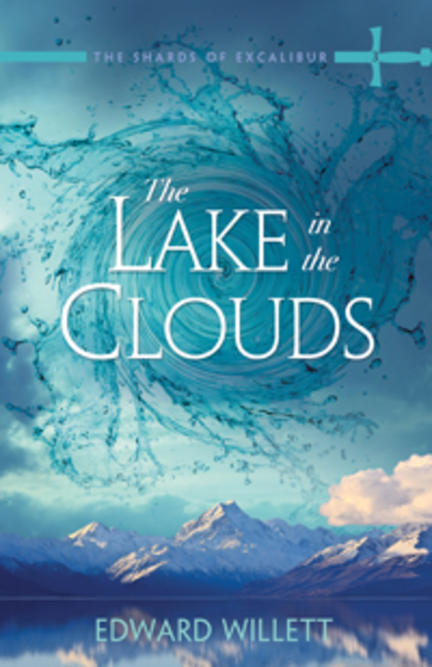 In the third instalment of this modern take on Arthurian legends, Ariane — descendant of none other than the Lady of the Lake herself — is on the run and on her own. Using her powers to keep avoiding Rex Major's agents makes her too weak to detect the next Shard of the broken sword she must reunite. And her erstwhile best friend and sidekick Wally has switched allegiance and is living a pampered life at Rex Major's right hand.

Perhaps worst of all, the powerful Rex (aka Merlin) has thebiggest network in the world, and has used it to find Ariane's Aunt Phyllis — her mother's sister, and the person she's closest to.

With her aunt under threat, Ariane has no choice but to walk straight into Rex Major's trap. No longer using her powers to stay ahead of his spies, she can sense the third Shard. Now all she has to do is win back Wally's friendship, protect her aunt's life, figure out Major's next move — oh, and get to New Zealand and safely back with the Shard whose song is beginning to call her...

Edward Willett is the award-winning author of more than sixty books of fantasy, science fiction, and non-fiction for all ages. He won Canada’s top science fiction award, the Aurora Award, for Best Long-Form Work in English in 2009 for Marseguro (DAW Books); the sequel, Terra Insegura, was shortlisted for the same award. Other science fiction books from DAW include Lost in Translation, The Cityborn, and the upcoming Worldshaper (September 2018), which will launch a new series. He’s also the author of the fantasy novels Magebane (written as Lee Arthur Chane) and the Masks of Aygrima trilogy (written as E.C. Blake). Other titles include the five-book Shards of Excalibur series for Regina’s Coteau Books, and the young adult fantasy Spirit Singer, which won the Regina Book Award at the 2002 Saskatchewan Book Awards. Ed began his career as a reporter, photographer, columnist, cartoonist, and eventually editor for the Weyburn Review, then spent five years as communications officer for the then fledgling Saskatchewan Science Centre. He’s been a fulltime freelance writer (and actor and singer) for twenty-five years. His nonfiction runs the gamut from science books and biographies to local history. He lives in Regina with his wife, Margaret Anne Hodges, P.Eng., their teenaged daughter, Alice, and their black Siberian cat, Shadowpaw.

Lake in the Clouds

Lake in the Clouds is the third installment in the Shards of Excalibur series. If you haven’t read the first two books, beware of spoilers. You’ll want to read the entire series for continuity. When we last left Ariane and Wally, they had just been separated by the evil Merlin-turned-computer-tycoon, Rex. Wally has been taken in by Rex’s smooth talk and lies about Ariane and her ever-growing power. Wally is about to discover that Rex isn’t as nice as he pretends to be. What does Rex have planned for Wally?

Lake in the Clouds is a suspenseful read that keeps the pace moving. However, it doesn’t end on as much of a cliffhanger as the second book and we’re left wondering how long it will take them to find all five shards, when they’ve only found a few so far. Still, there’s some big developments hinted at in this book, so the fourth one promises to bring in some new characters that should shake things up a bit. Unassuming characters in the first and second books have already begun to reveal their more important roles in the story. Readers can remain hopeful that there will eventually be a payoff for all of this searching.

Wally and Ariane show themselves to be both independent and resourceful in this third book. Younger readers will find much to admire about these characters. Their many adventures take them all over the world, from Canada to Hawaii and New Zealand, although they never stray far from their strong moral compass.

THIS BOOK IS AVAILABLE FROM YOUR LOCAL BOOKSTORE OR FROM WWW.SKBOOKS.COM

Other titles by Edward Willett

From the Street to the Stars

Master of the World

Paths to the Stars

I Tumble Through the Diamond Dust