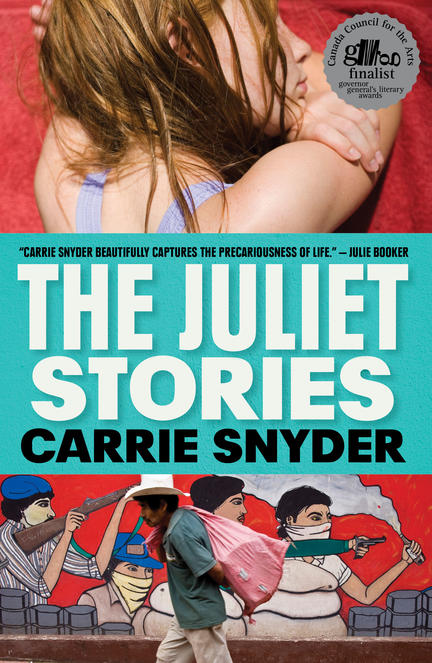 Shortlisted for the Governor General's Literary Award: Fiction and selected as a Globe and Mail Top 100 Book

Juliet Friesen is ten years old when her family moves to Nicaragua. It is 1984, the height of Nicaragua's post-revolutionary war, and the peace-activist Friesens have come to protest American involvement. In the midst of this tumult, Juliet's family lives outside of the boundaries of ordinary life. They've escaped, and the ordinary rules don't apply. Threat is pervasive, danger is real, but the extremity of the situation also produces a kind of euphoria, protecting Juliet's family from its own cracks and conflicts.

When Juliet's younger brother becomes sick with cancer, their adventure ends abruptly. The Friesens return to Canada only to find that their lives beyond Nicaragua have become the war zone. One by one, they drift from each other, and Juliet grows to adulthood, pulled between her desire to live a free life like the one she remembers in Nicaragua, and her desire to build for her own children a life more settled than her parents could provide.

With laser-sharp prose and breathtaking insight, these stories herald Carrie Snyder as one of Canada's most prodigiously talented writers.

... excellent ... Snyder has an uncanny ability to make the unfamiliar intensely knowable ... [The Juliet Stories is] pitted with a surplus of lovely land mines of revelation, aha moments exploding into wonderful, sometimes profoundly sad, insights.

Similar to [Virginia] Woolf in style, Snyder’s stream-of-consciousness prose gives the reader a view of Nicaragua from the inside ... you may find yourself pleasantly challenged (and enchanted) by Snyder’s impressionistic language and plot fragmented by time and geography.

Carry Snyder is a writer that we’re bound to hear more of in the future. Her razor-sharp prose is insightful and rich throughout.

Snyder is phenomenal here, crafting some of the most striking images and beautiful sentences that you will likely read all year. The Juliet Stories is not to be missed.

... here is as good a capsule explanation for what happened in Nicaragua as you’ll get from any more conventional historical source ... mature and powerful ... Snyder maintains an engaging blog called Obscure CanLit Mama, but if there’s any justice she’ll soon have the option of dropping that first word.

Fans of The Poisonwood Bible by Barbara Kingsolver and Paul Theroux's The Mosquito Coast will love this one.

... a stream of sensual imagery that grows more sophisticated with each page ... The Juliet Stories highlights the lessons we learn in youth and with age, and the conflict between the freedom we value and the security we desperately need.

... well-crafted and imaginative ... Snyder’s tone and style is vivid and compelling ...

When Juliet Friesen is ten years old, her parents, Bram and Gloria, announce that the family is about to embark on an exciting and important adventure. It’s 1984, and Ronald Reagan has declared war on the communists. Communists, according to Juliet’s parents, are people who share everything, so in Juliet’s eyes, the President of the United States has essentially declared a war against sharing. To make matters worse, he has sent soldiers to kill Communists in a faraway country called Nicaragua. Juliet’s parents decide that someone needs to stand up to Reagan, and that someone is the Friesen family. They join The Roots of Justice, an organization that believes Reagan will stop the fighting in Nicaragua if the country is suddenly flooded with ordinary Americans. The Roots of Justice help the Friesens relocate, and once they are settled in Nicaragua, direct the family to the areas most vulnerable to attack.

Life in Nicaragua takes its toll. The Friesens don’t speak much Spanish, they don’t understand basic rules of the culture, and they don’t have a way of integrating easily into their surroundings. When they head into conflict or when conflict finds them, the immediacy of the danger is overwhelming. It eventually becomes clear to Gloria that protecting Nicaragua means jeopardizing their family, and when her elder son becomes seriously ill, she and the children leave for a safer life in Canada.

Despite her mother’s desire for security, the eighteen months in Nicaragua has provided Juliet with an extremely vulnerable foundation on which to build her adult life. In a heartbreaking, engaging, and beautifully written collection, The Juliet Stories follows Juliet through her adolescence and early adulthood as she tries to create a life that accommodates her past without allowing it to completely define her. Snyder’s latest work will appeal to readers of Miriam Toews and Barbara Kingsolver.

Also posted on my blog at www.theteatimereader.wordpress.com