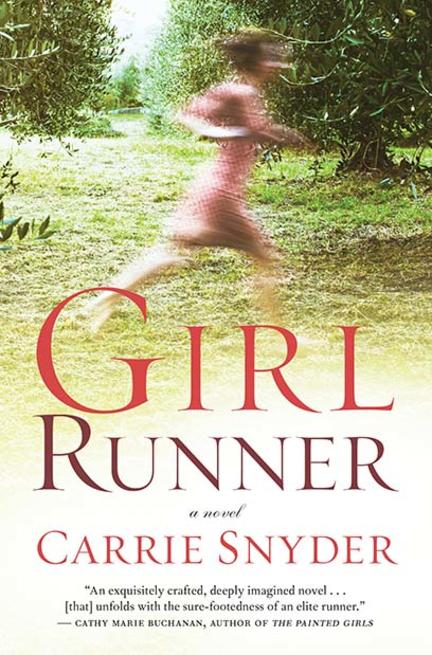 An unforgettable novel about competition, ambition, and a woman's struggle to earn a place in a man's world, Girl Runner is the story of 1928 Olympic gold medalist Aganetha Smart. Will Aganetha’s undeniable talent help her to outrun the social conventions of her time, or the burden of her family’s secrets?

As a young runner, Aganetha Smart defied everyone’s expectations to win a gold medal for Canada in the 1928 Olympics. It was a revolutionary victory, because these were the first Games in which women could compete in track events — and they did so despite opposition. But now Aganetha is in a nursing home, and nobody realizes that the frail centenarian was once a bold pioneer.

When two young strangers appear asking to interview Aganetha for their documentary film about female athletes, she readily agrees. Despite her frailty, she yearns for adventure and escape, and though her achievement may have been forgotten by history, her memories of chasing gold in Amsterdam remain sharp. But that triumph is only one thread in the rich tapestry of her life. Her remarkable story is colored by tragedy as well as joy, and as much as Aganetha tries, she cannot outrun her past.

Part historical page-turner, part contemporary mystery, Girl Runner peels back the layers of time to reveal how Aganetha’s amazing gift helped her break away from a family haunted by betrayals and sorrow. But as the pieces of her life take shape, it becomes clear that the power of blood ties does not diminish through the years, and that these filmmakers may not be who they claim to be…

so beautifully written…one of my favourites of the year

Ultimately, Girl Runner is a beautiful, thoughtful homage to those forgotten women who stepped outside the boundaries of what was allotted to them, and a testament to the struggles and sacrifices that paved the way for the female athletes who followed.

Snyder’s imagination has here worked overtime to produce a novel of intriguing originality. The book is well written and totally captivating, and is a rare salute to women in sport.

richly imagined…a story that traces the deep contradictions and challenges of familial bonds and breaks, the mystery of death and mortality, and the hardships of advanced age

In Girl Runner, Carrie Snyder proves that she is a master storyteller

In Girl Runner, an exquisitely crafted, deeply imagined novel, former Olympic athlete Aganetha Smart comes to vibrant, often aching life. As she pursues her dream, negotiates the travails of achieving much early in life and navigates the complexities of family and friendship, her captivating story unfolds with the sure-footedness of an elite runner.

The story itself is compelling and timeless and the female characters are as sharply drawn as if they had been carved from the unyielding earth of the Ontario farmland. Carrie Snyder’s precise images and clear sentences carry the action forward, and her expert handling of the changes in setting make the shifts almost seamless...

…what defines the novel is the depth and breadth of Aggie herself; she’s a rare heroine whose rich internal life is matched only by the abundance of her external living.

Carrie Snyder has written an extraordinary, accomplished debut novel of love and family: a wonderful story of a free spirit forced to make difficult choices. Aggie Smart is a truly memorable heroine: she grabbed my hand on page one and never let go.

Sara Gruen, author of Water for Elephants and At the Water’s Edge

'Girl Runner' is a marvelously complex novel that never loses its way... a powerful novel

a beautiful story about following your heart…

readers, get ready to be dazzled

Girl Runner is a book that will, and should, find a wide audience…one of my favourite books of 2014.

Girl Runner...more than lives up to the promise of The Juliet Stories (2012) and Hair Hat (2004)...a complex novel...rhythmic and satisfying.

Aganetha Smart is a character all readers will root for; Girl Runner is a celebration of ardent, unapologetic women, and those who won’t stop running. Snyder provides a satisfyingly emotional and gripping read.

This is a satisfying story about a complicated and compelling life- a life, so it happens, shaped by running ... Girl Runner makes for a gold medal read.

If you’re going to read Girl Runner, cancel all of your plans and get comfortable because you are not going to want to put this book down.

Girl Runner is a well-paced book that weaves together the past and present narratives of an uncompromising woman’s life … Snyder… manages to capture the essence of the need to run, that marrow-deep desire.

…crisp and smart and lyrical. It is a page-turner.

Snyder’s novel is lovely. The descriptions…are a breath of palpable fresh air.

Female Protagonists with No Time for Your Sh*t

NevertheLIST, she persisted: 8 female protagonists who don’t have time for your sh*t

A recommended reading list from Elisabeth de Mariaffi, whose latest novel is Hysteria.