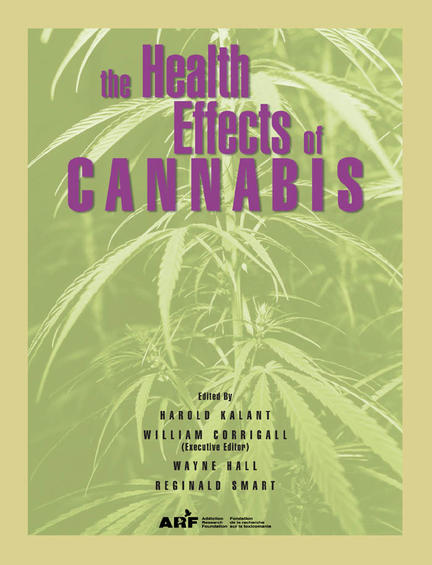 The Health Effects of Cannabis is a definitive reference text on the adverse, and also the potentially beneficial, effects of cannabis use. Internationally recognized experts in the field contribute a wealth of information about the use and effects of Canada’s most widely used illicit drug.

Harold Kalant, PhD, is Professor Emeritus of Pharmacology and Pathological Chemistry with the University of Toronto and Director Emeritus of Behavioral Research with the Centre for Addiction and Mental Health in Toronto. He received training in Internal Medicine and then went on to obtain a PhD in Pathological Chemistry with a post doc fellowship in biochemistry. He was working with individuals struggling with alcoholism as early as the 1950s and has gone on to become an international authority on the study of drug dependency and toxicity with additional specific expertise in the area of cannabinoids. Dr Kalant was appointed by the Governor General to the first board of the Canadian Centre on Substance Abuse (1989-1993). He has served on the extra-mural research advisory board for NIDA and is past chair of the WHO Committee on Cannabis and Health (1994-1998). Dr Kalant has received numerous honors and awards for his work including the Distinguished Scientist Award with the American Society of Addictions Medicine.

William Corrigall, PhD is a professor of Psychiatry at the University of Minnesota and a Senior Scientist at the Minneapolis Medical Research Foundation. Prof. William Corrigall was trained in Chemistry and Biophysics, and then pursued postdoctoral research in Neurosciences at the Albert Einstein College of Medicine in New York City. Following this, he was a research scientist at the Centre for Addiction and Mental Health (CAMH) in Toronto, with cross appointment to the Department of Physiology at the University of Toronto. During this time Dr. Corrigall conducted internationally funded research on the central nervous system mechanisms of addiction with primary a focus on nicotine and tobacco. Subsequent to this, Dr. Corrigall moved to the National Institutes of Health in Bethesda, Maryland where was Director of the Nicotine and Tobacco Addiction Program at the National Institute on Drug Abuse (NIDA), and also headed NIDA's Translational Research Branch. In this position Dr. Corrigall directed the development of program strength in nicotine and tobacco research at NIDA, and contributed to cross-institute efforts at NIH, including the NIH Roadmap.Dr. Corrigall is a past president of the Society for Research on Nicotine and Tobacco and the 2006 winner of the Langley Award for Groundbreaking Advances in Basic Nicotine Research.

Wayne Hall is chief investigator and group leader of the Addiction Neuroethics Unit. He is an NHMRC Australia Fellow and Professorial Research Fellow at UQ Centre for Clinical Research, The University of Queensland. He was formerly Professor of Public Health Policy in the School of Population Health, UQ (2005-2010), Director of the Office of Public Policy and Ethics at the Institute for Molecular Bioscience, UQ (2001-2005) and Director of the National Drug and Alcohol Research Centre at UNSW (1994-2001). He has advised the World Health Organization on: The Health Effects of Cannabis use; the effectiveness of drug substitution treatment; the scientific quality of the Swiss heroin trials; the contribution of illicit drug use to the global burden of disease; and the ethical implications of genetic and neuroscience research on addiction. In 2001 he was identified by the Institute for Scientific Information as one of the world’s most highly cited social scientists in the past 20 years. He was awarded an NHMRC Australia Fellowship in 2009 to research the public health, social policy and ethical implications of genetic and neuroscience research on drug use and addiction. He was recently given a Visiting Professorship at the Institute of Psychiatry in London (Kings College, University of London) to do work in this field.

Other titles by Harold Kalant

Other titles by Wayne Hall