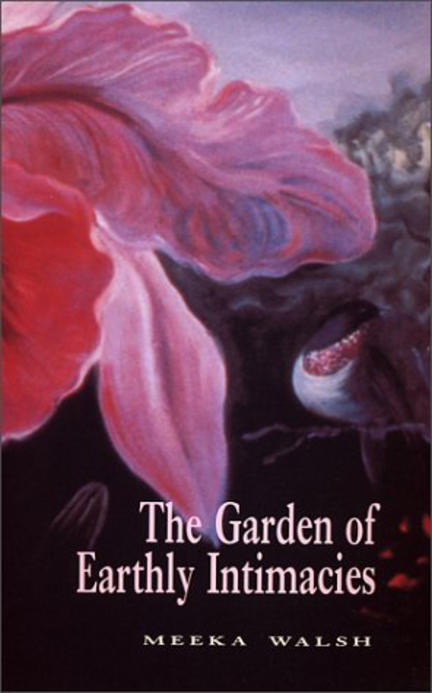 The lyrical and precise stories in The Garden of Earthly Intimacies achieve an intensity that touches on the rhapsodic. Few characters in recent Canadian fiction are as responsive to the sensual richness of the world as the women who inhabit these beautifully transparent stories. Whether they're stepping into a warm bath recently abandoned by an elusive, imaginary lover, or stepping onto the pure whiteness of an isolated Mexican beach, the women in Meeka Walsh's fictional garden carry themselves forward in a glistening exquisite dance.

These stories also tell, with uncanny accuracy, of the closeness between human and animal worlds. Leopard cousins, hieratic iguanas and a dog like a gazelle occupy the same active and emotional space as the humans encountered by the reader. In what has been described as break-through writing, Meeka Walsh writes in a celebratory way about her own body, and her narrators take from their womanly beings fierce and delicate imprints for lives lived with quiet but uncompromising passion.

Meeka Walsh is a Winnipeg-based writer, critic and editor whose stories have appeared in Descant, The Malahat Review, Canadian Fiction Magazine and Prairie Fire. Since 1993 she has edited Border Crossings, an international arts magazine published in Winnipeg. She has received seven nominations for her writing at the Western and National Magazine Awards and has won two gold medals.

Walsh is also a member of the Canadian Artist's and Producer's Professional Relations Tribunal for the Status of the Artist. In 2003 she was awarded the Lifetime Achievement Award by the Western Magazine Awards Foundation and in 2007 she received a medal from the RCA for her contribution to visual art in Canada. The Garden of Earthly Intimacies is her first book of fiction.

'Walsh's language speaks of both the earthly and the otherworldly, the mundane and the magical, and her characters' gestures, transcending the ordinary, and rendered in sensual, elegant prose, are fresh, subtle, and somehow perfect.'

'The Garden of Earthly Intimacies perfectly captures the intangible. The best stories (the title story, 'Mexican Island Quartet', 'Going Down') are like translations of sensuality, as if sand or butter or seawater spoke a language not quite like ours. And it's through the senses that her characters discover themselves, or find the power to rebel against a variety of cruelties.'

'A central theme of the book is the belief that knowing and interpreting the world are private and nearly unsharable passions. What can be exchanged are words, stories, music. And beneath the language and visual beauty of the text is a yearning to tell smells. The olfactory sense, once so vital to our survival, is often evoked.'

'It's uncanny how these stories and their characters sneak up on you, stay with you, haunt you, for these are mostly stories in which nothing happens. A woman stays in a hotel for two weeks and gets small gifts on her dinner service from a chef she never sees; a woman takes a bath in a tub recently vacated by her travelling companion. But there's magic at work. Walsh has done something to time. She can stretch a description of a man casting a fishing line for a full page, and you are hooked; the tension never lessens.'

Other titles by Meeka Walsh