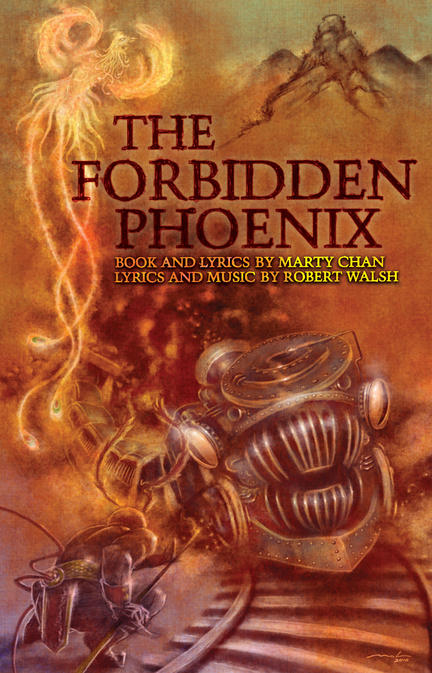 Sun Wukong’s goal is simple: to feed his son Laoson. Known to his people as the Monkey King, Sun Wukong leaves his home with a promise to return one day and feed the drought-ravaged city of Jung Guo. Sun Wukong's path, however, becomes a test of strength, agility, and character as he comes face to face with mysterious, enchanting, and heartless creatures. Inspired by the Chinese opera, The Forbidden Phoenix's lyricism brings us to a world where Chinese parables are woven with the painful history of the immigrant men who suffered greatly to build Canada's railroad in the 1800s. Playwright Marty Chan and composer Robert Walsh create a musical rife with stylized characters, lending itself to a performance brimming with acrobatics, slapstick, and martial arts.

Derek Mah draws and paints in Calgary, Alberta, Canada, which is where he does most of what he does. There are very few things he does away from Calgary. They will not be mentioned here.

"Chan co-opts the ancient saga of the Monkey King, who travelled far and wide to feed his family, using it as a jumping off point for a touching, witty and exciting fable." —The Toronto Star

"The Forbidden Phoenix is a spectacular East-meets-West musical that is by no means just for kids." —Winnipeg Free Press

Other titles by Derek Mah

Fabulous Lives of the Big, the Bad, and the Wicked

Fabulous Lives of the Creepy, the Revolting, and the Undead