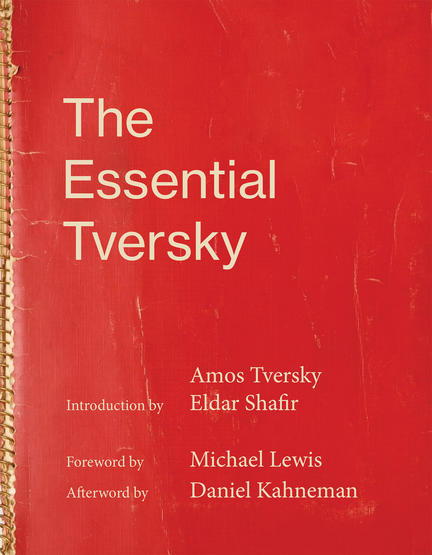 Some of the best and most influential papers by Amos Tversky, one of the most brilliant social science thinkers of the twentieth century.

Amos Tversky (1937–1996) was a towering figure in the cognitive and decision sciences. His work was ingenious, exciting, and influential, spanning topics from intuition to statistics to behavioral economics. His long and extraordinarily productive collaboration with his friend and colleague Daniel Kahneman was the subject of Michael Lewis's best-selling book, The Undoing Project: A Friendship that Changed Our Minds. The Essential Tversky offers a selection of Tversky's best, most influential and accessible papers, “classics” chosen to capture the essence of Tversky's thought.

The impact of Tversky's work is far reaching and long-lasting. In 2002, Kahneman, who drew on their joint work in his much-praised 2013 book, Thinking, Fast and Slow (and who contributes an afterword to this collection), was awarded the Nobel Prize in Economics for work done with Tversky. In The Undoing Project, Lewis (who contributes a foreword to this collection) describes his discovery that Tversky and Kahneman's thinking laid the foundation for Moneyball, his own ode to number-crunching. The papers collected in The Essential Tversky cover topics that include cognitive and perceptual bias, misguided beliefs, inconsistent preferences, risky choice and loss aversion decisions, and psychological common sense. Together, they offer nonspecialist readers an introduction to one of the most brilliant social science thinkers of the twentieth century.

Amos Tversky (1937–1996) was a mathematical psychologist whose research in the cognitive and decision sciences has been enormously influential. From 1978 to 1996, Tversky taught at Stanford University, where he was the inaugural David-Brack Professor of Behavioral Sciences and Principal Investigator at the Stanford Center on Conflict and Negotiation.

Eldar Shafir, a student, close friend, and collaborator of Tversky's, is Class of 1987 Professor of Behavioral Science and Public Policy at Princeton University.

Other titles by Michael Lewis

Other titles by Daniel Kahneman