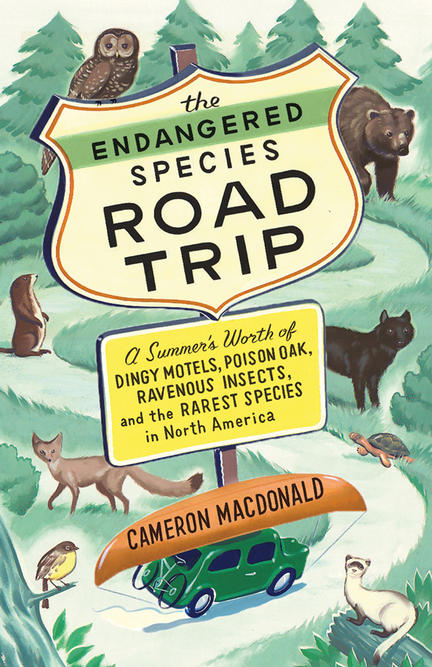 Crammed into a minivan with wife, toddler, infant, and dog, accompanied by mounds of toys, diapers, tent, sleeping bags, and other paraphernalia, Cameron MacDonald embarks on a road trip of a lifetime to observe North America's rarest species. In California, the family camps in the brutally hot Mojave, where he observes a desert tortoise"the size and shape of a bike helmet and the colour of gravel” sitting motionless in the shade of a scrubby sagebush. In Yellowstone, after driving through unseasonal snow, he manages to spot a rare black wolf and numerous grizzlies, which, unfortunately, call forth a crowd of "grizzly gawkers." The journey takes the MacDonald family from British Columbia, along the west coast of the U.S., through the Southwest and Florida, up the east coast of the U.S., and finally to eastern Canada and then back home to BC.

Along the way, MacDonald offers fascinating details about the natural history of the endangered species he seeks, as well as threats like overpopulation, commercial fishing, and climate change that are driving them towards extinction.

Cameron MacDonald has worked as a wildlife biologist across North America. His writing has appeared in the Globe and Mail, the Georgia Straight, and elsewhere. He lives in Vancouver, B.C.

MacDonald's comedic sense and his engaging style are addictive and the resulting tale is intensely charming.”Publishers Weekly, Starred Review

Other titles by Cameron MacDonald