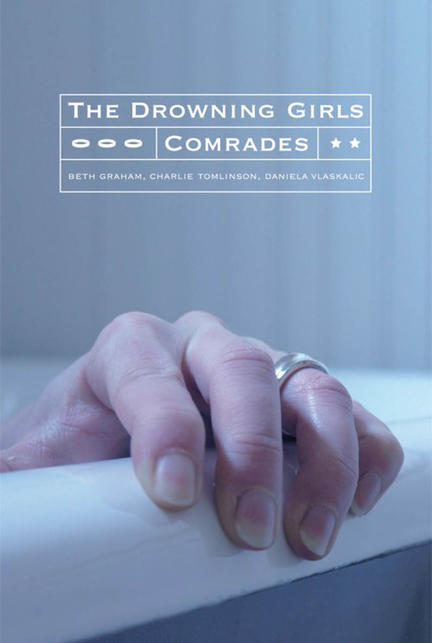 Bessie, Alice, and Margaret have two things in common: they are married to George Joseph Smith, and they are dead. Surfacing from the bathtubs they were drowned in, the three breathless brides gather evidence against their womanizing, murderous husband by reliving the shocking events leading up to their deaths. Reflecting on the misconceptions of love, married life, and the not-so-happily ever after, The Drowning Girls is both a breathtaking fantasia and a social critique, full of rich images, a myriad of characters, and lyrical language.

Bartolomeo Vanzetti and Nicola Sacco dreamt of the land of the free. Leaving their small Italian villages, they embarked on a long voyage to the United States, only to encounter a world they never could have imagined. Controversially imprisoned for murder, both men must fight for their lives amidst discrimination and public humiliation. Based on actual events, Comrades bring to life Sacco and Vanzetti's seven-year imprisonment and explores the struggles and agonies of two men, tried not for what they did, but for who they were.

Beth Graham is a playwright and an actor. She was a finalist for the Governor General’s Literary Award for Drama in 2015 for her play The Gravitational Pull of Bernice Trimble. Other plays include Icarus Air, Working It Out, and A Life in the Day. Other collaborations include The Drowning Girls, written with Charlie Tomlinson and Daniela Vlaskalic, Mules, and The Last Train, both written with Daniela Vlaskalic. Beth is a graduate of the University of Alberta’s BFA acting program. She lives in Edmonton.

Charlie Tomlinson is a teacher/director/actor who lives in St Johnâ??s, Newfoundland. He is the former artistic director of c2c theatre. He has worked at theatres from Newfoundland to the Yukon and has taught in Ontario, Alberta, and Newfoundland.

Daniela Vlaskalic is an actor and playwright who lives and works in Canada. Since graduating from the University of Alberta with a Bachelor of Fine Arts in acting, she has worked in numerous theatres across the country. Daniela began collaborating with Beth Graham and Charlie Tomlinson in 1999 with The Drowning Girls and continued collaborating with Beth on several plays, including Comrades, The Last Train (winner of the 2003 Alberta Playwrights Network Playwriting Competition), and Mules. They also shared the role of artist-in-residence at Catalyst Theatre in 2006. Daniela currently lives in Toronto.

Liz Nicholls is a theatre writer, traveller, and appreciator of all matters theatrical.

"The imaginative depth of The Drowning Girls is enough to take your breath away." —Bob Clark, Calgary Herald

"If the job of political theatre is to inspire or warn, to ignite new ideas or incinerate old ones with the heat of emotion, Comrades has more than punched in." —Liz Nicholls, Edmonton Journal

Other titles by Beth Graham

The Gravitational Pull of Bernice Trimble

Other titles by Charlie Tomlinson

The Queen of Paradise’s Garden

Other titles by Liz Nicholls