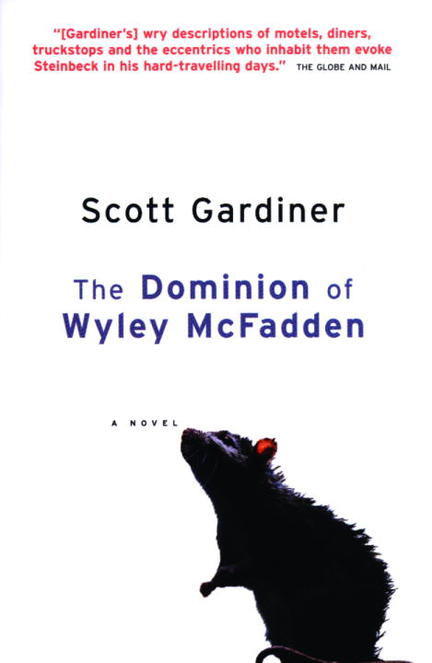 The world's only rat-free zone is about to be invaded by a contrary man with a mission. Wyley McFadden, ex-fertility doctor-turned-urban trapper, has launched an outlandish scheme to redress geo-zoological discrimination in Canada. In what looks like an ordinary camper van, McFadden is transporting a contraband cargo from Toronto to Alberta. But just past Wawa, he spots a female hitchhiker in a mud-encrusted tennis outfit. As McFadden gets closer, he realizes she is being eaten alive by mosquitoes and black flies. Fearful, starving and exhausted, the girl doesn't seem to know where she's headed and refuses to explain how she came to be hitchhiking in the middle of nowhere, warding off his questions by asking him about his own past. But once McFadden reveals his secrets, including the reason for his journey, she launches into her own shocking and terrifying story.

Scott Gardiner is a journalist who has written for Maclean’s, Toronto Life, and National Geographic. He is also the author of two novels. The first, The Dominion of Wyley McFadden, was shortlisted for the Commonwealth Writers’ Prize in the Best First Book category and the Amazon/Books in Canada First Novel Award and declared one of the Globe and Mail’s Best Books of the Year. He lives in Toronto.

Excerpt: The Dominion of Wyley McFadden (by (author) Scott Gardiner)

We can look with pride and satisfaction on the fact that Alberta is still basically rat-free. However, the price of continued freedom is continued vigilance . . . — H. B. McEwen, Deputy Minister, Alberta Agriculture, March 1983

What McFadden is now is a trapper, or more precisely, an urban trapper, but he has put that profession aside for the moment to enjoy the fruits of his labour. He and his truck have just passed the town of Wawa, off the eastern flank of Lake Superior. Greenish ponds and beaver dams slide by the windows, now the big lake itself has disappeared, and miles and miles of conifer and aspen. Peering at the mirror and the wobbling road behind, McFadden sighs, then shifts into a lower gear. There is a girl by the wayside, and Wyley McFadden is slowing down to pick her up.

Between gears it occurs to him that he hasn’t taken on a hitchhiker in years. These days most drivers don’t risk it. Then again, these days most people don’t hitchhike. McFadden has always made a habit of picking up female hitchhikers. It seems to him neglectful — negligent, even — to leave a woman standing at the side of the road. As the distance shrinks, he calculates the implications, meditating outcome, analyzing risk, and then again absolves his conscience. He’d have stopped for this one anyway, regardless of consequence; it’s been obvious from half a mile she’s under serious attack.

Although McFadden is a trapper of the urban variety, he prides himself on maintaining the same level of skill as his bush-dwelling colleagues. It is habit for him always to scan his surroundings for signs of game. So far he has spotted two bear and a moose, though this is no keen feat of woodcraft since all of them were just hanging around the side of the road looking miserable. For strategic reasons McFadden has timed his holidays to start in early June. Early June, on the northern reaches of the Great Lakes, is the beginning of the height of mosquito season. It is also, coincidentally, the tail of the blackfly season, so on a good day, a warm, calm day after rain, both mosquito and blackfly will rise in equal numbers. The bear and the moose were keeping to the cleared verges beside the highway, hoping for a breeze to blow the bugs away.

Judging from the motion of the girl up ahead, there is no such breeze to be had.

From a distance she appears to be performing some exotic dance. A little closer reveals that, if this is a dance, she is not the best of dancers. Mostly she’s hopping from one foot to the other, bending in oddly rhythmic intervals and waving her arms. Occasionally a thumb shoots out to indicate that she is hitchhiking.

Wyley McFadden’s cargo is delicate. He has no intention of jolting his load just so he can stop a little faster. He slides smoothly down the gears and taps the brakes only just a little. As he eases closer, the dance resolves itself into a pattern.

Starting off on her right foot, she brings her left one up to pass behind the other, high up as she can get without falling. At the same time she bends and swipes a hand along the leg she’s standing on, then unbends everything, changes feet and does the same on the other side. In the pause when both feet are on the ground, she brushes her arms, face and as much of her back as she can reach, and briefly performs the hitchhiking signal. She is outfitted in what appears to be tennis whites, and McFadden decides she must be an idiot.

He rolls up beside her and leans for the door latch.

Before the truck has stopped, she is running for the passenger side, batting at the cloud around her head. Without a word she dives for the seat, shaking her hair and sending a swarm of insects humming through the cab.

At such meetings on the road there is usually small talk:

“Morning. Where you going?”

“Hi! Just up the way to Hornepayne.”

“Well, I can see you as far as White River.”

There is none of this. Within seconds McFadden’s own skin is punctured a dozen times. “Get moving!” she says, but McFadden is already pumping the clutch. Gravel flies beneath the wheels and the truck shudders sideways onto the pavement. The gears groan in acceleration.

The girl levers down the window as they pick up speed to blow the attackers back outside, and begins with ferocious intensity to destroy any still attached to her skin. McFadden slaps his neck, his cheek, and bears down on the gas.

For a while he too is preoccupied with scratching and slapping. Most of the mosquitoes are soon killed or blown out, but the smaller, thicker-bodied blackflies continue to creep in numbers across the windshield. The girl is methodically crushing them with her thumb. Bloody fingerprints dot the glass.

“So,” says McFadden, rooting for a Kleenex, “where are you going?”

The girl turns to look at the road ahead. Her left eye has swollen partly shut.

“That way,” she says, motioning with her head, then leans across him to squash a bug on his side of the screen.

There is a fetish that comes over people in the presence of blood-drinking insects — a universal and feverish compulsion. It is, perhaps, a primordial response; an obsession on the part of the psyche, having been delivered from torment, to turn on its tormentors in savage retribution; a terrible and pitiless desire to obliterate the enemy, to annihilate it absolutely. McFadden and the girl dedicate the next several minutes to a silent and bloody operation of seek-and-destroy.

With one hand on the wheel McFadden patrols the area forward of the steering column; the girl ranges throughout the rest of the cab. McFadden targets anything immediately ahead, the girl deals with whatever is beyond his reach. When a humming tells him a mosquito is circling in an eddy behind his head, it is the girl who turns and reaches from her knees to seek it out. And when a blackfly crawls from where it had lodged unfelt in his hair, it is she who pinches it from the lobe of his ear to crunch between her fingers. He hands her the Kleenex when all is done, knowing that in the thickness outside she will have breathed some in.

"Gardiner brings together many disparate subjects, including the legal entrapment of rats...the human fertility industry...sexual victims, what it is to be Canadian, Quebec separatism and Alberta's idiosyncratic politics." —The Toronto Star

"[Gardiner's] wry descriptions of motels, diners, truckstops and the eccentrics who inhabit them evoke Steinbeck in his hard-travelling days." —The Globe and Mail
“The Dominion of Wyley McFadden is a first novel but it sure doesn’t feel like one. Gardiner’s writing is tight and sure…. The reason the novel works is because Gardiner has Wyley’s voice exactly rigth; he was born to talk and his story feels like something you would expect from W.O. Mitchell…. A promising novel…. Wyley McFadden, the hero of this, Scott Gardiner’s first novel is a man with a mission…Gardiner has a fine sense of atmostphere, whether it is in the camper or in a truckstop restaurant.” —Edmonton Journal

Other titles by Scott Gardiner

Fire in the Firefly