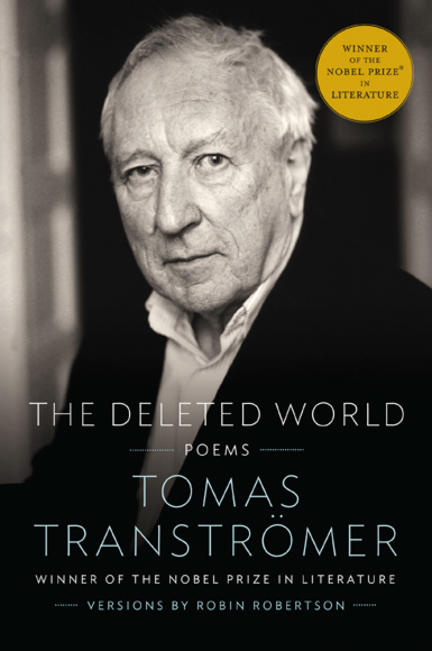 Tomas Tranströmer -- the recipient of the 2011 Nobel Prize in Literature -- can be clearly recognized not just as Sweden's most important poet, but as a writer of international stature whose work speaks to us now with undiminished clarity and resonance. Long celebrated as a master of the arresting, suggestive image, Tranströmer is a poet of the liminal: his verse is drawn again and again to thresholds of light and of water, the boundaries between man and nature, wakefulness and dream. A deeply spiritual but secular writer, his skepticism about humanity is continually challenged by the implacable renewing power of the natural world. His poems are epiphanies rooted in experience: spare, luminous meditations that his extraordinary images split open -- exposing something sudden, mysterious, and unforgettable.

Brilliantly translated by renowned Scottish poet Robin Robertson, the work collected in The Deleted World span the breadth of Tranströmer’s career and provide a perfect introduction to the work of one of the world’s greatest living poets.

Tomas Tranströmer was born in Stockholm in 1931. He has written eleven books of poetry and has received numerous international honors, including the Neustadt International Prize for Literature, the Bonnier Award for Poetry, Germany’s Petrarch Prize, the Bellman Prize, the Swedish Academy’s Nordic Prize, and, in 2007, the Griffin Lifetime Recognition Award. In October 2011 he was awarded the Nobel Prize in Literature. He lives with his wife in Stockholm.

Robin Robertson is from the northeast coast of Scotland and now lives in London. His first collection of poems, A Painted Field, won numerous awards, including the Forward Poetry Prize for Best First Collection and the Scottish First Book of the Year Award. His second collection, Slow Air, appeared in 2002, his third, Swithering, won the Forward Poetry Prize for Best Collection and was a finalist for the T. S. Eliot Prize for Poetry, and his fourth, The Wrecking Light, was shortlisted for the T. S. Eliot Prize for Poetry, the Costa Poetry Award, and the Forward Poetry Prize. His work appears regularly in the London Review of Books, the New York Review of Books, and The Times Literary Supplement. In 2004 he received the E. M. Forster Award from the American Academy of Arts and Letters. He lives in London.

... Robertson’s alterations do a fine job of conveying a poem’s spirit ... The Deleted World is pleasurable ...

[Transtromer] displays a masterful sense of cinematic imagery ... the selected poems are spare, powerful, and image-driven.

[Robin] Robertson has done justice to the greatest qualities of Transtromer’s poems: their evocative, striking imagery and uncanny metaphorical resonance ... a collection that sparks with an exquisite, awakened awareness of the world.

Other titles by Tomas Transtromer

Other titles by Robin Robertson