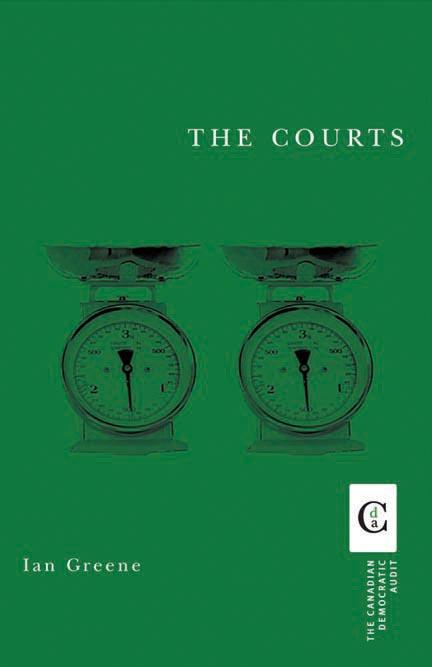 Ian Greene offers an insider's perspective on the role of judges, lawyers, and expert witnesses; the cost of litigation; the representativeness of juries; legal aid issues; and questions of jury reform. He also examines judicial activism in the wider context of public participation in courts administration and judicial selection and of how responsive the courts are to the expectations of Canadian citizens. The Courts moves its examination of the judicial system beyond the well-trodden topics of judicial appointment, discipline, independence, and review to consider the ways in which courts affect daily life in terms of democratic principles. Although courts are often viewed as elitist and unaccountable, they are more valuable aspect of democratic practice than most citizens realize.

IAN GREENE is a University Professor Emeritus at York University, where he has taught public policy and administration since 1985. He was the founding director of York's Masters program in Public Policy, Administration and Law. Greene's most recent book is Honest Politics Now (with David P. Shugarman). He is also the author of The Charter of Rights and Freedoms. He lives in Lethbridge, Alberta.

The key strength of this work is that it helpfully refocuses the debate by assessing whether the Courts are living up to reasonable democratic expectations in relation to this “decision-making” function with as much detail and thoroughness as it carries out this task in relation to the Court’s somewhat sexier “policy-making” function ... the book is easy to digest and comprehend due, in part, to its well planned structure.

The Courts explores, explains and evaluates the roles, responsibilities and involvement of the judiciary in Canada federally and provincially. Each level of courts (federal and provincial, Supreme, as well as Superior and Territorial) and participants in the judicial process (i.e., judges, lawyers, litigants, witnesses, jurors, administrative staff) are described and evaluated based on the “democratic audit criteria” around which books in this series are organized—participation, responsiveness, inclusiveness. The impact of the Canadian Charter of Rights and the Constitution on the courts and legislatures of Canada are among the topics presented. Analysis of both strengths and weaknesses in the judicial system as well as suggestions for possible reforms and discussion questions are included.

Ian Greene is a professor of political science at York University. This is the final book in the Canadian Democratic Audit series. The website is canadiandemocraticaudit.ca.

Other titles by Ian Greene

The Legacy of a Supreme Court Chief Justice

A Question of Ethics

Decision-Making in Canadian Courts of Appeal

Inside the Canadian Judicial System

The Charter of Rights