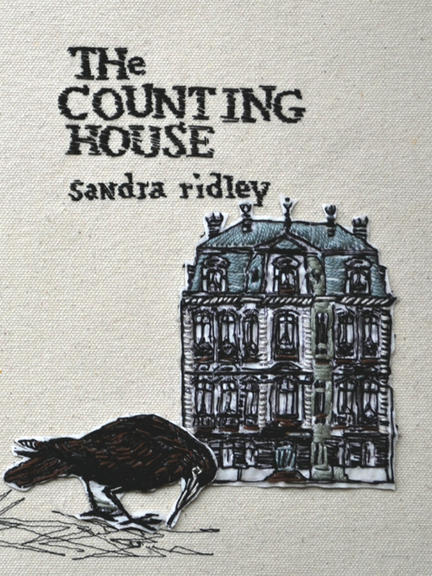 Akin to a bookkeeper's accounting of what's given and taken in a fraught, uncertain exchange, The Counting House goes on to record the pageantry and pedantry of courtly affection gone awry. Symbols and origins of traditional rhymes involving kings and queens serve as inventory, alongside elements of Michel Foucault's Discipline and Punish and Simone de Beauvoir's The Second Sex. In forensic sequences of inquisition, scrutiny, and reckoning, Ridley reveals the maiden as muse as modern darling ï?? unhoused and exacting ï?? in "all of her violet forms."

Sandra Ridley’s first full-length collection of poetry, Fallout, won the 2010 Saskatchewan Book Award for publishing, the Alfred G. Bailey prize, and was a finalist for the Ottawa Book Award. Her second book, Post-Apothecary, was short-listed for the 2012 ReLit and Archibald Lampman Awards. Also in 2012, Ridley won the international festival Of Authors’ Battle of the Bards and was featured in The University of Toronto’s Influency Salon. Twice a finalist for the Robert Kroetsch Award for innovative poetry, Ridley is the author of two chapbooks, Rest Cure – and Lift, for which she was co-recipient of the bpNichol Chapbook Award.

Sandra Ridley has revealed our closest contradictions in poems where harm is exhausted in both pleasure and pain. These poems find a blackbird baked into a pie, and our own drooling expectation of dessert, the edible object, is replaced by the excitement of the bird that escapes it, somehow alive. We revel in the spectre of the creature's death and resurrection. How close we are to pain and destruction here, but Ridley surprises us with life that stubbornly and lovingly continues. In language that soothes and bites word by word, The Counting House is a book that lives fiercely in the complex in-between of love and punishment, pleasure and pain, coo and cry.
- Jenny Sampirisi

The diversity of language is marvelous, and Ridley's deeper humanistic concerns - about devalued subjects crashing forward into a condition of self-declaration - emerge through these poetic sequences intensely, and bravely.
- Margaret Christakos

Ridley means business, and her fierce application of lyrical craft and formal innovation to her subject render all of her books as stirringlyevocative and cohesive works. Her most recent collection The Counting House is no exception...
- Jacket2

Other titles by Sandra Ridley

Our final interview in this year’s Griffin Prize special edition of The Chat is our conversation with Sandra Ridley, author of Silvija.