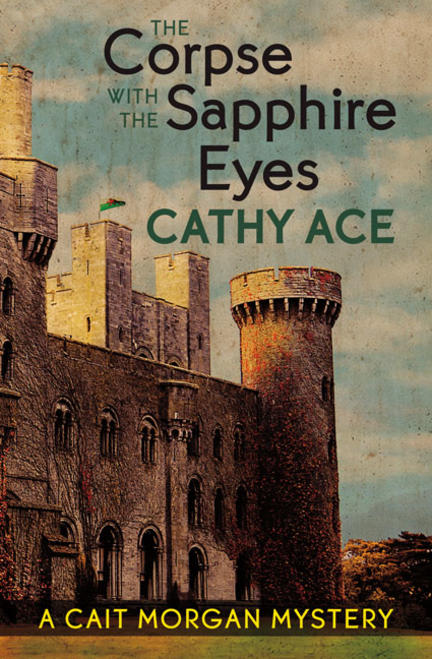 It's Cait and Bud's wedding weekend and for the first time she feels like a bride—or at least, she's supposed to. But then the rain won't quit, the supposedly romantic Welsh castle feels creepy, and there's a dead body on the stairs.

What first appears to have been the untimely, unfortunate, and accidental death of their wedding choirmaster quickly reveals itself to have been a murder. And when a series of mysterious events occur around the castle, Cait, Bud, and Cait's sister Sian tackle the case of The Corpse with the Sapphire Eyes, attempting to solve the mystery before another sinister event can ruin their destination wedding.

The fifth Cait Morgan mystery will have you stumbling to catch up to Cait's brilliant mind, and keep you guessing until its shocking conclusion.

Welsh Canadian mystery author Cathy Ace is the creator of the Cait Morgan Mysteries, which include The Corpse with the Silver Tongue, The Corpse with the Golden Nose, The Corpse with the Emerald Thumb, and The Corpse with the Platinum Hair. Born, raised, and educated in Wales, Cathy enjoyed a successful career in marketing and training across Europe, before immigrating to Vancouver, Canada, where she taught on MBA and undergraduate marketing programs at various universities. Her eclectic tastes in art, music, food, and drink have been developed during her decades of extensive travel, which she continues whenever possible. Now a full-time author, Cathy's short stories have appeared in multiple anthologies, as well as on BBC Radio 4. She and her husband are keen gardeners, who enjoy being helped out around their acreage by their green-pawed Labradors. Cathy's website can be found at cathyace.com. Follow her on Twitter at @AceCathy.

Cathy Ace suggests a gin and tonic is the perfect beverage to drink while consuming The Corpse with the Sapphire Eyes.

"[Cathy Ace] blew me away with a surprising twist that I did not see coming . . . talk about a chain reaction and its repercussions . . . a story that ended quite satisfactory for this reader." —Dru's Book Musings Blog

Cait Morgan and Bud Anderson are on their way to Wales for their destination wedding, but the plane seems to be grounded in Vancouver—find out why, and what Cait can do about it, in this prequel to The Corpse with the Sapphire Eyes.

Cathy Ace reveals to the South Wales Evening Post how growing up in Swansea, Wales influenced her fifth Cait Morgan Mystery, The Corpse with the Sapphire Eyes.

Want to know what Cait Morgan sounds like? Tune in to Cathy Ace's interview on CrimeFiction.fm to hear that lovely Welsh lilt.

Other titles by Cathy Ace

Case of the Unsuitable Suitor, The

Case of the Curious Cook, The

The Corpse with the Ruby Lips

The Corpse with the Garnet Face

The Corpse with the Diamond Hand

The Corpse with the Platinum Hair

The Corpse with the Emerald Thumb

The Corpse with the Golden Nose

The Corpse with the Silver Tongue

Holey Tales: 7 Literary Sleuths Are on the Case for Mystery Month

In which writers use a mysterious hole as a starting point for a mystery. The results are wildly diverse, a lot of fun, and make for some excellent …

'Tis the season to curl up with mystery!