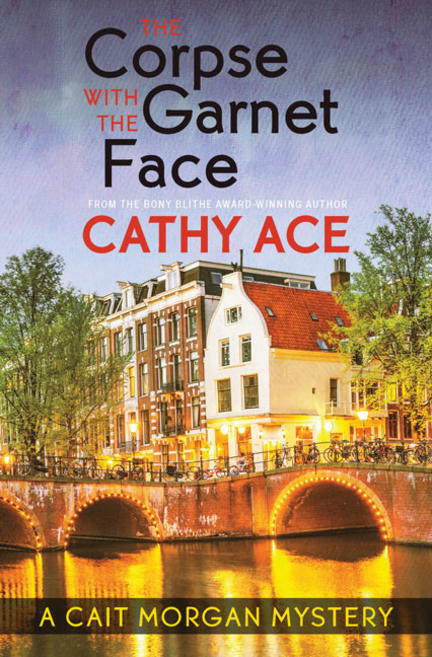 The seventh book in the Cait Morgan series finds the eccentric Welsh criminologist–sleuth accompanying her husband Bud to Amsterdam to try to unravel a puzzling situation.

To Bud’s surprise, he discovers he has a long-lost uncle, Jonas, who’s met an untimely death. Bud's mother assures him Jonas was a bad child, but, from beyond the grave, Uncle Jonas begs his nephew to visit the city he adopted as his home to delve into the life he built for himself there, founded on his passion for art.

With an old iron key as their only clue, Cait and Bud travel to Amsterdam to solve the cryptic message left by Jonas—and to honor the final wishes of a long-lost relative.

Welsh Canadian mystery author Cathy Ace is the creator of the Cait Morgan Mysteries, which include The Corpse with the Silver Tongue, The Corpse with the Golden Nose, The Corpse with the Emerald Thumb, and The Corpse with the Platinum Hair. Born, raised, and educated in Wales, Cathy enjoyed a successful career in marketing and training across Europe, before immigrating to Vancouver, Canada, where she taught on MBA and undergraduate marketing programs at various universities. Her eclectic tastes in art, music, food, and drink have been developed during her decades of extensive travel, which she continues whenever possible. Now a full-time author, Cathy's short stories have appeared in multiple anthologies, as well as on BBC Radio 4. She and her husband are keen gardeners, who enjoy being helped out around their acreage by their green-pawed Labradors. Cathy's website can be found at cathyace.com. Follow her on Twitter at @AceCathy.

"Unique and original, this engaging treasure hunt through the art world—and one family's secrets—sets an endearing, smart, and contemporary couple on a compelling quest. Intelligent, touching, and more than a mystery, this page-turner is a revealing insight into love and loyalty." —Hank Phillipi Ryan, Agatha, Anthony, and Mary Higgins Clark award-winning author

"'Is that a genuine Rembrandt in your downstairs loo?' You'll have to read Cathy Ace's latest gem to find out the answer. A taut and tantalizing mystery, with a rogues' gallery of suspects, The Corpse with the Garnet Face is an irresistible gastronomic and artistic jaunt through Amsterdam in the company of criminal psychologist Cait Morgan. Ace is a genial and knowledgeable guide who paints a beautiful picture. Dutch beer and French fries and mayonnaise with a side of van Gogh and Vermeer." —James Ziskin, author of the Anthony Award-nominated Ellie Stone Mysteries

Cathy Ace chats to her hometown newspaper about her eighth mystery.

We’re not the only ones excited about Cathy Ace's next Cait Morgan mystery! 49th Shelf included lists The Corpse with the Garnet Face in their spring preview.

Other titles by Cathy Ace

Case of the Unsuitable Suitor, The

Case of the Curious Cook, The

The Corpse with the Ruby Lips

The Corpse with the Diamond Hand

The Corpse with the Sapphire Eyes

The Corpse with the Platinum Hair

The Corpse with the Emerald Thumb

The Corpse with the Golden Nose

The Corpse with the Silver Tongue

Books With Global Themes to Read This Spring

A cross-genre selection with a balance of heavy and light.