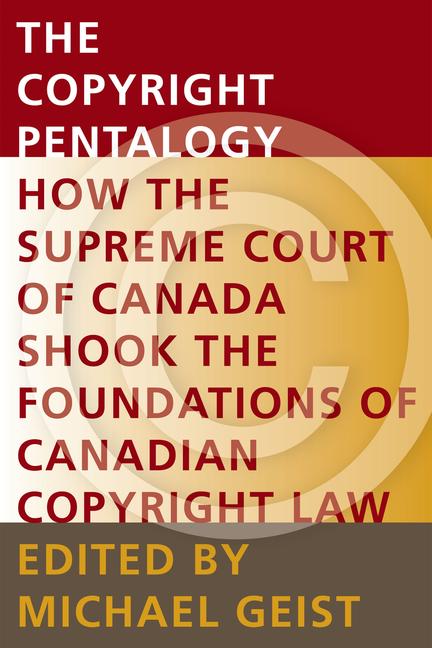 In the summer of 2012, the Supreme Court of Canada issued rulings on five copyright cases in a single day. The cases represent a seismic shift in Canadian copyright law, with the Court providing an unequivocal affirmation that copyright exceptions such as fair dealing should be treated as users’ rights, while emphasizing the need for a technology neutral approach to copyright law. The Court’s decisions, which were quickly dubbed the “copyright pentalogy,” included no fees for song previews on services such as iTunes, no additional payment for music included in downloaded video games, and that copying materials for instructional purposes may qualify as fair dealing. The Canadian copyright community soon looked beyond the cases and their litigants and began to debate the larger implications of the decisions. Several issues quickly emerged. This book represents an effort by some of Canada’s leading copyright scholars to begin the process of examining the long-term implications of the copyright pentalogy. The diversity of contributors ensures an equally diverse view on these five cases, contributions are grouped into five parts. Part 1 features three chapters on the standard of review in the courts. Part 2 examines the fair dealing implications of the copyright pentalogy, with five chapters on the evolution of fair dealing and its likely interpretation in the years ahead. Part 3 contains two chapters on technological neutrality, which the Court established as a foundational principle of copyright law. The scope of copyright is assessed in Part 4 with two chapters that canvas the exclusive rights under the copyright and the establishment of new “right” associated with user-generated content. Part 5 features two chapters on copyright collective management and its future in the aftermath of the Court’s decisions. This volume represents the first comprehensive scholarly analysis of the five rulings. Edited by Professor Michael Geist, the Canada Research Chair in Internet and E-commerce Law at the University of Ottawa, the volume includes contributions from experts across Canada. This indispensable volume identifies the key aspects of the Court's decisions and considers the implications for the future of copyright law in Canada.
- This book is published in English.

Law, Privacy and Surveillance in Canada in the Post-Snowden Era