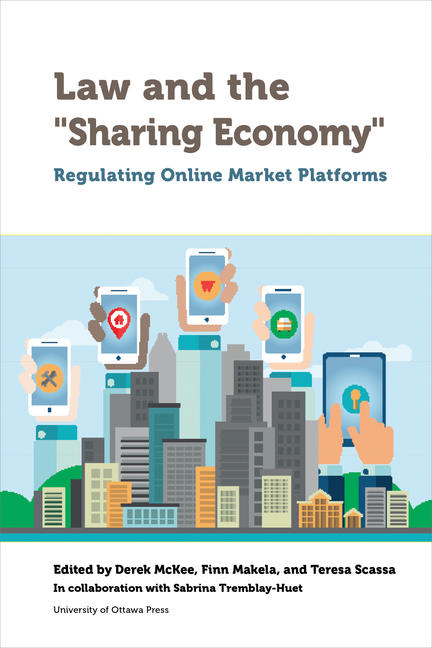 Finn Makela, B.A., M.A., LL.B/B.C.L., LL.D is an associate professor at the Faculty of Law, Université de Sherbrooke. His primary areas of teaching and research are labour and employment law, legal theory and legal methodology.

Teresa Scassa is the Canada Research Chair in Information Law at the University of Ottawa, where she is also a professor at the Faculty of Law. She is a founder and former editor of the Canadian Journal of Law and Technology; author of Canadian Trademark Law (LexisNexis, 2010); co-author of Electronic Commerce and Internet Law in Canada (CCH Canadian Ltd, 2012), which was the winner of the 2013 Walter Owen Book Prize; and co-author of Canadian Intellectual Property Law: Cases, Notes and Materials (Emond Montgomery, 2013). She is also a co-editor of the recently published Intellectual Property for the 21st Century: Interdisciplinary Approaches (Irwin Law, 2014). She is a member of the External Advisory Committee of the Office of the Privacy Commissioner of Canada, and of the Canadian Government Advisory Committee on Open Government. She has written widely in the areas of intellectual property law, law and technology, and privacy.

Francesco Ducci is a doctoral candidate at the University of Toronto Faculty of Law. He specializes in competition law as well as economic analysis of law.

Vincent Gautrais is Full Professor and L. R. Wilson Chair in Information Technology and E-commerce Law at the Faculty of Law, Université de Montréal. He is also the director of the Centre de recherche en droit public. He previously held the Université de Montréal Excellence Chair in Security and Internet Law.

Nofar Sheffi is a lecturer at the University of New South Wales Faculty of Law. She specializes in contract theory, law and technology, as well as critical and social legal theories.

Sabrina Tremblay-Huet. is a doctoral candidate and lecturer at the Université de Sherbrooke Faculty of Law. She specializes in tourism law, international human rights law, and critical legal theory.

Eric Tucker, B.A., LL.B., LL.M. is a professor at Osgoode Hall Law School, York University. He has published extensively on the history and current state of labour and employment law. He is the author of Administering Danger in the Workplace (Toronto: University of Toronto Press, 1990) and co-author of Labour Before the Law: The Legal Regulation of Workers’ Collective Action (Toronto: University of Toronto Press, 2001, with Judy Fudge) and Self-Employed Workers Organize (Montreal: McGill-Queen’s University Press, 2005, with Cynthia Cranford, Judy Fudge, and Leah Vosko). He is also the editor of Working Disasters: The Politics of Recognition and Response (Amityville, NY: Baywood Publishing Company, 2006).

MARIANA VALVERDE is a Professor at University of Toronto Centre for Criminology & Sociolegal Studies, and a Fellow of the Royal society of Canada. Her fields of study are the legal regulation of sexuality, sociolegal theory, historical sociology, and urban governance and law. She has written eight books, co-edited four anthologies and over 45 articles. In 2016 she received the Kalven prize of the Law and Society Association, for her longstanding contribution to empirical socio-legal scholarship. In addition to scholarly publishing, Mariana also writes for magazines, newspapers, and online forums, mostly on public-private infrastructure partnerships but occasionally on other topics; she has been published in The Conversation and Spacing Magazine. She lives in Toronto.

Other titles by Teresa Scassa

Extraterritorial Jurisdiction in an Age of Globalization

Intellectual Property for the 21st Century

Law, Privacy and Surveillance in Canada in the Post-Snowden Era

Other titles by Eric Tucker

Labour Before the Law

The Regulation of Workers' Collective Action in Canada, 1900-1948

Labour Before the Law

The Regulation of Workers' Collective Action in Canada, 1900-1948

Administering Danger in the Workplace

Other titles by Mariana Valverde