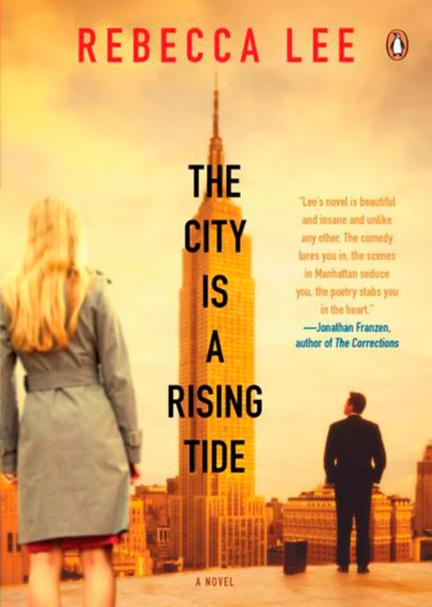 In New York City, Justine Laxness works as a money manager at an international nonprofit company, Aquinas. Her obsession with her boss, Peter, spurs her to embezzle funds and lend the money to James Nutter, a screenwriter and old flame who has resurfaced in Justine's life after fifteen years. But every action she takes will have unforeseen ramifications, creating a tidal wave of betrayal and destruction, from the Three Gorges Dam on the Yangtze to the refined vistas of Central Park. Lyrical and suspenseful by turns, The City Is a Rising Tide is an enchanting work of luminous prose and uncommon imagination.

Rebecca Lee is the author of the critically acclaimed novel The City Is a Rising Tide and the short story collection Bobcat And Other Stories. She has been published in The Atlantic and Zoetrope, and in 2001 she received a National Magazine Award for her short fiction. Originally from Saskatchewan, Lee is a graduate of the Iowa Writers' Workshop and is now a professor of creative writing at the University of North Carolina at Wilmington.

“Lee’s novel is beautiful and insane and unlike any other. The comedy lures you in, the scenes in Manhattan seduce you, the poetry stabs you in the heart.” - Jonathan Franzen, author of Freedom and The Corrections

“Astounds at every turn ... Lee amp[s] up the tension, comic and otherwise, until the book begins to seem like it could spontaneously combust.” - The New York Times Book Review
“The pleasure of reading The City Is a Rising Tide comes from its crystalline pose as well as its almost poetic descriptions of life in the big city. . . . New York has never seemed so beautiful, so ineffable.” - San Francisco Chronicle
“Striking . . . A richly detailed interplay between past and preset, consciousness and memory, personal and national, more evocative than linear and often quite funny . . . thought provoking and very entertaining.” - The Washington Times
“Rebecca Lee's The City Is a Rising Tide is astonishing.... The world through her eyes is a complicated, fabulous place.” - Women's Review of Books
“Rebecca Lee has a satirist’s grasp of the nuances of idealism. She also has an imaginative sense of place, whether evoking New York in the booming nineties or Mao’s Beijing not as material locations but each as a unique state of mind.” - The Boston Globe
“Lee has created a moody, entrancing, and suspenseful seriocomic tale replete with shimmering landscapes, caustic irony, and provocative inquiries into the motives of do-gooders and the narcosis of illusion. This intricate novel ... is significant and extraordinarily astute as rising tides literal and figurative threaten to drown dreams, love, and peace.” - Booklist
“[A] slender gem of a novel ... Lee’s voice is that you might get if you filtered sly chick lit through the lens of a darker and more poetic perception. . . . Like Manhattan itself, Lee infuses the daily lives of her characters with glitter, breezy cool, and sharp-edged wit.” - The Christian Science Monitor
"[A] ruminative, thoughtful first novel." - Kirkus Reviews
“After reading Rebecca Lee’s The City Is a Rising Tide, I dreamed ‘Rebecca Lee writes like an artist sculpting in gold.’ In waking life, I would say more – that the novel is vital and astute; that the prose is astonishingly, effortlessly lovely. But the dream stays with me, too, of an author who understands that the right words can be just as luminous as gold.” - Carolyn Parkhurst, author of The Dogs of Babel

Other titles by Rebecca Lee

Bobcat and Other Stories