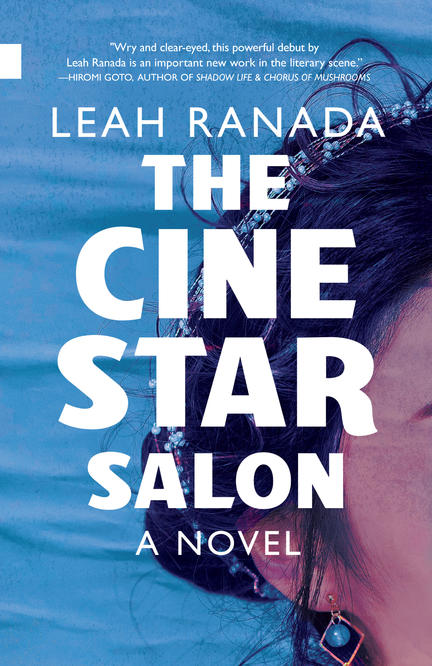 Philippine-born Vancouverite Sophia is most grateful for two things: her modest hair salon and Adrian, her mild-mannered fiancé. She is eager to get married, move away from her highly educated but career-frustrated parents, who believe that their daughter can be so much more than a beautician.

Then Sophia’s estranged friend reaches out from Manila, desperate for help. After a dubious accident, her fiery Auntie Rosy is on the verge of losing the Cine Star Salon—the place where Sophia first felt the call to become a hairstylist and salon owner. Coming to her auntie’s aid is not so easy though. Sophia worries helping might reopen old wounds and threaten the bright future she has planned.

Leah Ranada’s debut novel is a graphic and engaging depiction of the importance of women’s work and the loyalties that connect friends across oceans. The Cine Star Salon marks the entry of a vital new voice in Canadian literature.

Leah Ranada was born in the Philippines. She moved to Canada in 2006, shortly after graduating from University of Santo Tomas in Manila. She attended The Writer’s Studio at Simon Fraser University in 2013. Her short stories have appeared in On Spec, Room Magazine, Santa Ana River Review, Scarlet Leaf Review, and elsewhere. Leah has brought her administrative and editorial skills to legal, settlement services, and academic workplaces. She lives in New Westminster and blogs at leahranada.com. The Cine Star Salon is her debut novel.

From Chapter 1 of The Cine Star Salon
The clanging of woks and harried calls from the cooks seemed louder that Sunday, the bustle carrying a more frenzied air. Sophia felt like a caged animal. She looked up at the ceiling, wishing to float above the flood of noise. Across the table, her parents sat straight-backed and elegant—they dressed up on Sundays for mass. At this dim sum place along Fraser Street, they were familiar faces to servers who were used to serving them efficiently. Her father always brought them to the same place after the service; he enjoyed the anxious, deferential treatment. Sophia wished everybody would just slow down, that the plates of deep-fried rolls would land on the table without that haphazard clink, the tiny steaming bowls set down with some care. The world lacked in grace. There was no need for all this hurry.

There was also no need to talk so loudly. Sophia marvelled at how her mother’s excited voice surfed above the noise level in the restaurant, while Samuel and their father hungrily served themselves with the newly arrived delicacies. What was it with men that could make them so indifferent when everything around them was chaos?

“There might have been a fight, some confrontation.” Her mother looked to Sophia for confirmation. During last night’s Skype call to Manila, every single detail had been dissected, with Sophia’s mother embellishing with things remembered from the past, and Auntie Mila correcting her faulty memory, happy to fan the same topic as it kept at bay the other usual subject, which was her perpetual singlehood. They had harmoniously called it an accident. Sophia, who had been eavesdropping, missed the kindness of the word, its blamelessness, now that her mother was adding fresh angles to her younger sister’s juicy gossip. “Maybe it wasn’t an accident. Who knows?”

The feast on the Lazy Susan gave off the aroma of sesame and pork fat, all of which ordinarily made her day. Sophia had a voracious appetite. Adrian had once said that she wasn’t like other beautiful women who ate like birds.

That morning she didn’t feel like a single bite.

“Your Auntie Rosy,” her mother waved her chopsticks at Sophia on your, stressing that the woman was just someone Sophia called Auntie, not a family relation, “has not seen a customer since the accident. The ale left with an unfinished haircut and a bleeding cut on her cheek. Fight or no fight, Rosy must have been drunk!”

“For sure, she’s going to lose the business. It’s so sad.” But her mother didn’t sound sad. She sounded cold, satisfied even.

“Where did Auntie Mila hear this?” Sophia made her voice sound skeptical, poised to dismiss the story.

“Everyone in the neighbourhood is talking about it. I’m surprised you haven’t heard.”

“I haven’t been in touch with them.” She avoided her mother’s gaze by looking up at the server who put down a fresh teapot on their table before hurrying off with the empty one. He brushed against another server pushing a cart that carried towering piles of bamboo steamers. Sophia herself felt like a tottering container in danger of falling to the floor, her secrets tumbling out like meat filling from a breached dumpling.

Other titles by Leah Ranada