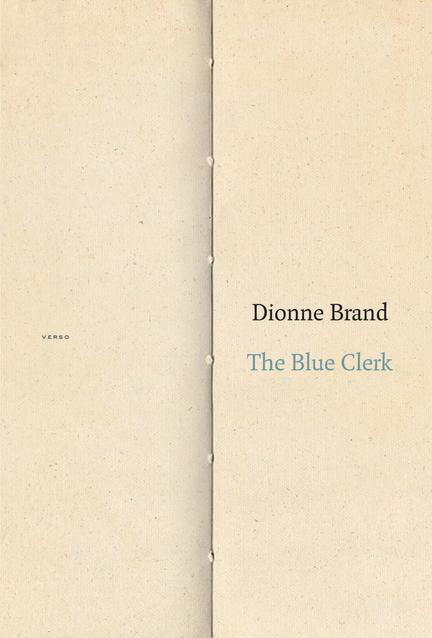 Dionne Brand, author of the Griffin Poetry Prize-winning collection Ossuaries, returns with a startlingly original work about the act of writing itself.

On a lonely wharf a clerk in an ink blue coat inspects bales and bales of paper that hold a poet's accumulated left-hand pages--the unwritten, the withheld, the unexpressed, the withdrawn, the restrained. In The Blue Clerk award-winning poet Dionne Brand stages a conversation and an argument between the poet and the Blue Clerk, who is the keeper of the poet's pages. In their dialogues--which take shape as a series of haunting prose poems--the poet and the clerk invoke a host of writers, philosophers, and artists, from Jacob Lawrence, Lola Keipja, and Walter Benjamin to John Coltrane, Josephine Turalba, and Jorge Luis Borges. Through these essay poems, Brand explores memory, language, culture, and time, offering beautiful and jarring juxtapositions ("The Wire is the latest version of The Adventures of Huckleberry Finn"), and endlessly haunting language ("On a road like this you don't know where you are. Whether you have arrived or whether you are still on your way. Whether you are still at the beginning or at the end. You are in the middle all the time. What would be the sign?").

An essential observer and one of the most accomplished poets writing today, Dionne Brand's latest engages intimately with the act and difficulty of writing, the relationship between the author and the world, and the relationship between the author and art. Profound, moving, and wise in equal parts, The Blue Clerk is a work of staggering intellect and imagination, and a truly sublime piece of writing from one of Canada's most renowned, honoured, and bestselling poets.

On the train, is that when I should say the clerk emerged?
She was before me, she was always with me. She was a
stevedore stowing cargo for one of my grandmothers, Luisa
Andrade from Venezuela. I met her on Luisa’s piano with
the photographs. But that was in another language. Luisa
threw a man into a pit and covered him with sand; when
he got up she had mothered his six children, stitched racial
discord among them, subjected them to photographs for
the piano and left for her grave. She came from La Guaira
on a steamer on the 18th of a certain month. You are
making that up. Well Cumaná then. Guaira. She became
legend. I did not know her name until a few years ago.
You never asked. She was legend.

"Brand melds the intellectual with the sensory in these searching think-pieces." --Toronto Star
“[Dionne Brand] is gracious, endlessly curious and eager to push the intellectual boundaries of her audience.” —Globe and Mail
“Dionne Brand’s The Blue Clerk is many things at once: a book-length ars poetica; an act of memory and reconfiguration; an extended meditation (one that moves at times directly, at others by a kind of philosophical osmosis) touching on the realms of history, politics, race and gender; an internal, consciously curated and interrogated dialogue that manages to create a space for all of these. Expansive, beautifully written, structurally compelling, and above all moving, The Blue Clerk is a book to be read (and re-read), not just for the pleasures of its language, but for the breadth of its vision, and the capaciousness of its thinking.” --Griffin Poetry Prize Jury Citation

“Dionne Brand’s ‘ars poetica in 59 versos’ is an impassioned, masterfully crafted interrogation of language, process, and representation that tests both the boundaries and boundlessness of the creative process. At once an epic poem, polemic, fragmentary novel, creation story, and grimoire, The Blue Clerk suggests an entirely new literary form, a magnificent literary achievement made accessible with a sly sense of humour, striking imagery, devout worship, and sharp questioning.” --Trillium Book Award Jury Citation

"These are texts written in overlay to an actual world, where an author’s subjectivity refracts surroundings. They also happen to be some of my favourite …