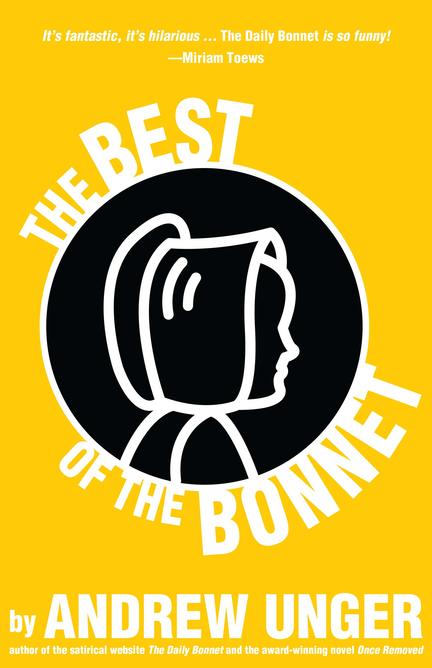 Since its debut, the internet’s most trusted source for Mennonite satire has drawn the attention of everyone from the Canadian Prairies to the high-rises of New York, keeping readers laughing with hundreds of hysterical headlines and tongue-in-cheek editorials where (almost) no topic is off-limits. The Best of the Bonnet brings together some of the funniest, most loved posts from The Daily Bonnet, a website that Miriam Toews calls “fantastic” and “hilarious.” This collection also includes new and updated articles, scholarly commentary, a glossary of Low German words, and an afterword by author Andrew Unger commenting on the nature of satire and the importance of community.

The Best of the Bonnet is an absolute must-have for fans of The Daily Bonnet or anyone in love with the absurdity of day-to-day life.

Andrew Unger is the author of the satirical website The Daily Bonnet and the award-winning novel Once Removed. An educator based in southern Manitoba, his work has appeared in Geez, Rhubarb, Ballast, CBC.ca, the Winnipeg Free Press, and many others.

If you go back far enough, he’s probably related to you.

Excerpt: The Best of the Bonnet (by (author) Andrew Unger)

Climate scientists in southern Ontario predict that, due to increasing temperatures, by the year 2030, there will be a global shortage of schmaunt fat.

The white cream gravy has been a staple of Mennonite diet for centuries, and scientists warn that as the world gets hotter, schmaunt fat supplies may be adversely affected.

“We’re really concerned,” said Mennonite cafe owner Bryan Koop. “We wouldn’t want to have to resort to using sour cream gravy, or brown gravy, or any other kind of gravy, really. Our people depend on the schmaunt for their very survival.”

The impact could go far beyond Canada, however. As temperatures warm in Mexico and Paraguay, Mennonites will be forced further north in search of suitable kielke toppings.

“It’s not impossible that in a few decades, places like Manitoba and Saskatchewan will be inundated with schmaunt fat refugees,” said Koop.

Government representatives in Mennonite-heavy areas have warned citizens not to start hoarding schmaunt. Meanwhile, Steinbach city council seem unconcerned about the pending shortage, turning down a request from local residents to fill the water tower with gravy.

It was just a regular Sunday after-church potluck for members of Leamington Gospel Mennonite Church. That is, until, Lydia Neufeld, 75, showed up with butter chicken.

“I couldn’t figure out what on earth it was supposed to be,” said baffled diner Henry Dyck. “This looks nothing like vereniki to me.”

The presence of the curry dish caused quite the uproar, as confused Mennonite seniors attending the luncheon tried to make sense out of the mysterious cuisine.

“Should I put it at the front of the line, or the back of the line, and how close to the bean salad should it go?” wondered event-organizer Martha Wiebe. “In the end I just decided to put it next to the raisin buns and hope for the best.”

Neufeld, who brought the dish, said she was told to bring “good old fashioned Mennonite cooking,” but was confused by what that meant.

“I heard from a missionary last Sunday that there are more Mennonites these days in India, than there are in North America,” she said. “It was an honest mistake. I’m truly sorry.”

Attendees filled their paper plates with processed ham slices, dill pickles, and marble cheese, and somehow they all found that their plates were, “much too full,” by the time they reached the butter chicken, though a few particularly polite Mennonites managed to squeeze a tiny dollop on the edge of their plates.

Inspired by Neufeld’s efforts in Leamington, editors at the Mennonite Treasury are considering adding chicken tikka masala, onion pakora, and Brenda Panktratz’s killer saag paneer recipe to their next edition of the cookbook under the category: “Food We Can’t Make Heads Nor Tails of But Seems to Taste Pretty Good Anyway.”

With the complete Old and New Testament now successfully translated into the Plautdietsch language, outsiders are having difficulty catching all the jokes.

“My oma and opa will read something from the Book of Leviticus in Low German and they’ll just crack up, but when I ask them to translate, it’s just not that funny,” said 13-year-old Barney Peters.

The Plautdietsch language is known for being filled with humour that is completely untranslatable.

“There’s just something about the story of Balaam’s talking donkey that isn’t funny when read in Enjelsch,” explained Grandma Peters, 71, of the Cuauahtemoc area. “Young Barney should brush up on his Plautdietsch and then he’ll be able to laugh along with us.”

Mr. and Mrs. Peters, and all their Low German-speaking friends, reportedly spend each evening howling over the ‘begats.’

“I can’t explain it,” said Peters, “but in Plautdietsch, it’s simply hysterical.”

A newly married couple from Morden, Ben and Emma Doerksen, recently visited frintschoft in British Colombia on their honeymoon this July, and have decided to stay on the west coast permanently.

“We just knew this was going to happen as soon as they said they were going to BC,” said Martha Doerksen, mother of the young groom. “Once you’ve seen the bright lights of Abbotsford, you just can’t go back to small town Manitoba after that.”

The Doerksens have taken up residence in a 1 bedroom basement suite that reportedly costs $4500 a month in rent, which the couple says is “well worth it.”

“This is the best place on earth,” explained 20-year-old Ben Doerksen. “I should know since I’ve already been to Morden, Regina, and the suburbs of Winnipeg.”

The couple is also excited to be within proximity of bohemian Vancouver.

“Being so close to Vancouver is something we can brag about to folks back home,” explained Emma, “but just like how we only ever took the occasional trip to the big city of Winnipeg to pick up some things at Costco, we plan to only go to Vancouver to buy bulk items and eat at White Spot.”

After residing in BC for just three days the Doerksens already think they’re much better than their Manitoba relatives and can’t get “how the hell anyone can live in such a cold climate.”

The Doerksens claim to miss nothing at all about Manitoba even though they’re already half a million dollars in debt and are constantly pestering their prairie relatives to send formavorscht, “because you just can’t get the good stuff out here.”

"It’s fantastic, it’s hilarious … The Daily Bonnet is so funny!"

Other titles by Andrew Unger

Best of the Bonnet