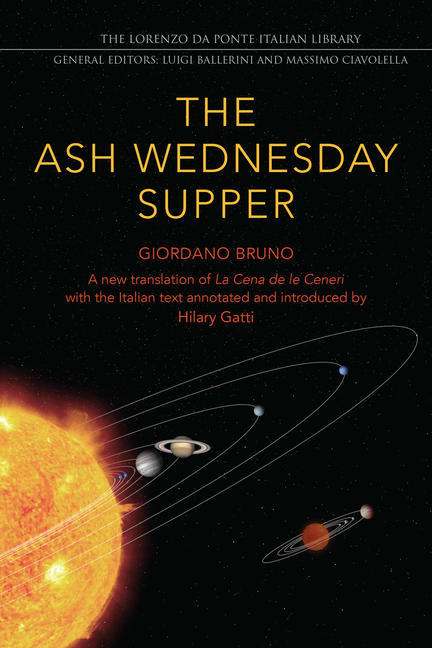 Giordano Bruno’s The Ash Wednesday Supper is the first of six philosophical dialogues in Italian that he wrote and published in London between 1584 and 1585. It presents a revolutionary cosmology founded on the new Copernican astronomy that Bruno extends to infinite dimensions, filling it with an endless number of planetary systems. As well as opening up the traditional closed universe and reducing earth to a tiny speck in an overwhelmingly immense cosmos, Bruno offers a lively description of his clash of opinions with the conservative academics and theologians he argued with in Oxford and London.

This volume, containing what has recently been claimed as the final version of Bruno’s Ash Wednesday Supper, presents a new translation based on a newly edited text, with critical comment that takes account of the most current discussion of the textual, historical, cosmological and philosophical issues raised in this dialogue. It considers Bruno’s work as a seminal text of the late European renaissance.

Giordano Bruno (1548 – 1600), born Filippo Bruno, was an Italian Dominican friar, philosopher, mathematician, poet, and cosmological theorist. He is known for his cosmological theories, which conceptually extended the then-novel Copernican model. In addition to cosmology, Bruno also wrote extensively on the art of memory, a loosely organized group of mnemonic techniques and principles. Other studies of Bruno have focused on his qualitative approach to mathematics and his application of the spatial concepts of geometry to language.

Hilary Gatti is a retired professor in the Faculty of Philosophy at the University of Rome, La Sapienza.

Other titles by Hilary Gatti

Geometry of the Passions

Florentine Memoirs from the Middle Ages and Renaissance

On Crimes and Punishments and Other Writings