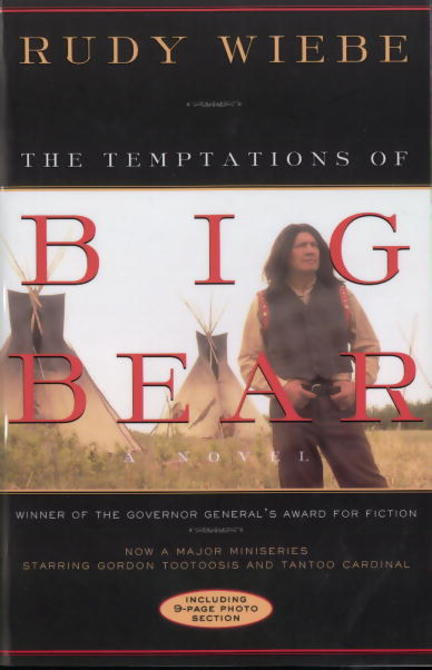 Early in his writing career, Rudy Wiebe’s imagination was caught by a heroic character of Cree and Ojibwa ancestry whose birthplace was within twenty-five miles of where Wiebe himself was born 110 years later. The man’s name translated into English was Big Bear, and he came to be the subject of one of Wiebe’s most highly praised works of fiction. A modern classic, Wiebe’s fourth novel is a moving epic of the tumultuous history of the Canadian West. The book won the 1973 Governor General's Award, and in the 1990s was made into a CBC television miniseries based on a script co-written by Wiebe and Métis director Gil Cardinal, shot in Saskatchewan’s Qu’Appelle Valley.

From the early days of North America, European settlers forced Natives aside, taking over their land on which they had lived for thousands of years. Big Bear envisioned a Northwest in which all peoples lived together peaceably, and in the 1880s made history by standing his ground to keep his Plains Cree nation from being forced onto reserves. The buffalo food supply was vanishing, but Big Bear led his people across the prairie, resisting pressure to cede rights to the land and give up freedom in exchange for temporary nourishment. The struggle brought starvation to his followers, tearing apart the community and eventually his own family. The story follows Big Bear’s life as he lives through the last buffalo hunt, the coming of the railway, the pacification of the Native tribes, and his own imprisonment.

Wiebe’s magnificent interpretation of Western Canadian history encompasses not only his hero's struggle for integrity and justice but also the whole richness of the Plains culture. Writing the unrecognized history of Western Canada required six years of study and travel through the prairies, a journey described vividly in the essay On the Trail of Big Bear. Wiebe was convinced that a new perspective was needed on the Canadian past and on prairie literature, which seemed to consist in “equal parts of Puritanism, Monotony, Farmers and Depression.” His aim was to draw the “imaginative map of our land,” to stamp a shared memory on it and make it come alive. He described how an epic might accomplish this:

. . . to break into the space of the reader's mind with the space of this western landscape and the people in it you must build a structure of fiction like an engineer builds a bridge or skyscraper over and into space. A poem, a lyric, will not do. You must lay great black steel lines of fiction, break up that space with huge design, and like the fiction of the Russian steppes, build giant artifact

Every character, date and major event in the book was taken from historical sources. As an author of historical fiction, Wiebe sifts through documents, searching for the story he needs to tell. “I see a number of possible stories I could write, and it sometimes takes longer . . . to decide which is the story I’m going to write, than the actual writing of it.” His art lies in bringing the characters to life. “You want your reader to understand these people . . . . You have to choose certain details to help readers see the kind of thing they did, the kind of people they were.” In The Temptations of Big Bear, he gradually places layers of imagined voices over the silence in the history books to create his narrative.

In November 1992, Wiebe received a letter from a woman who said she was Big Bear’s great-great-granddaughter. Yvonne Johnson was serving a twenty-five-year sentence for the murder of a man she believed to be a child molester in her home in Wetaskiwin, Alberta. The letter led to five years of phone calls and prison visits, interviews and personal journals, and finally to Stolen Life: The Journey of a Cree Woman, which Wiebe and Johnson wrote together. He realized that this mother of three had suffered not only a lifetime of abuse, but a miscarriage of justice. “The truth about it had to be told.” The book tells of the physical and sexual abuse of Johnson’s early years. She had little schooling and was a teen alcoholic. Wiebe felt it was a particularly moving story for women. “There are a lot of abused people. It doesn't depend on the colour of your skin or your heritage.” However, in the aftermath of the Canada-Indian Treaties and colonization, the statistics for violence, abuse, family breakdown and incarceration among Natives in Canada have certainly fulfilled the fears the Cree chief Big Bear had for his people.

“I see this room crowded with – handsome faces – faces handsomer than mine even when I was young. I have been the leader of People in this country for a long time; People rode from four directions to hunt with me. I never put a chain on anything. I stand here an old man, and I will be sent somewhere with this chain. No doubt these handsome faces I admire will know how to care for the land. No doubt, better than I. Perhaps they will also be able to care for my people, now that I am gone. My people are hiding in the woods, terrified – those are my children, and they are starving, driven from the land which was our great inheritance and they are running, somewhere, in the darkness, afraid to show themselves in the big light of day. Oh, when I stand on the ground with the sky over me I pray to That One whose finger drew us from Earth and spread it out for us like a big blanket, Forgive them, they are hungry and terrified, forgive them! Have you no children? Have they never asked you for food? Is there nothing but punishment in the Grandmother’s law? When a young man of the River People leads other young men rashly into a bad raid and one of them is left on the plain, that leader returns to camp and falls down before that father, that mother, and he cries for forgiveness. Then the mother touches him, the father lifts him and holds him to his breast and there is a son again in that empty lodge to make them happy, to care for them when they are old. Who can say here why the dead are dead? Who can give them life again? I say there will be a time soon when the Grandmother will be very happy for every one of my people that live in the North West. I plead with you, chiefs of the white law, have pity! Pardon the outcasts of my people!”

The judge had no eyes. On the motionless head the egg-shaped glasses sat glazed gold.

“There are only a few words left,” Big Bear said, softly. “This land belonged to me. When I had it I never needed your flour and pork. Sometimes I was stiff with Indian agents who looked at me as if I was a child and knew less than a child. Before many of you were born I ran buffalo over this place where you have put this building, and white men ate the meat I gave them. I gave them my hand as a brother; I was free, and the smallest Person in my band was as free as I because the Master of Life had given us our place on the earth and that was enough for us. But you have taken our inheritance, and our strength. The land is torn up, black with fires, and empty. You have done this. And there is nothing left now but that you must help us.

“I have heard your many words, and now you have heard my few. A word is power, it comes from nothing into meaning and a Person takes his name with him when he dies. I have said my last words. Who will say a word for my people? Give my people help! I have spoken.”

For a moment the thunder of his voice battered the room; the answering sound of River People rose behind him, almost as if for an instant the old man stood again in the strong circle of his council. Then Peter Houri’s voice spoke and the English voice came immediately, quiet as always, but now more than ever as he would not expect it from so thick a body, though covered with black; thinly hard like steel:

“Big Bear, you have been found guilty by an impartial jury. I have no objection to hear what you have to say, but on one point you must be corrected. This land never belonged to you. This land was and is the Queen’s. She has allowed you to use it. When she wanted to make other use of it, she called you together through her officers and let you decide which of the choicest parts of the country you wanted, to reserve them for yourself. Your people can live there because the Queen has graciously given it to them. The land belongs to the Queen.

"The Temptations of Big Bear is one of the best [novels]…ever written in Canada." — Maclean's

"Something like a true story, The Temptations of Big Bear is social realism raised to the level of elegy…A gorgeous lamentation." — Saturday Night
“A very rare, complexly emotional and profoundly philosophical experience . . . . A fictional meditation, in which [Wiebe] enters the very texture of the lives of his characters, Indian and white . . . . He has created a style for [Big Bear’s] incredible voice that fully wins our belief in its greatness and power . . . . A masterpiece.” — Edmonton Journal
“Wiebe captures the pathos and the emotion of Native people at a certain point in their history and he does it well . . . . Wiebe points out to us that Canada has not come to terms with Native peoples, that there is unfinished business to attend to.” — Thomas King

Where the Truth Lies

A Mennonite Boyhood in the Boreal Forest