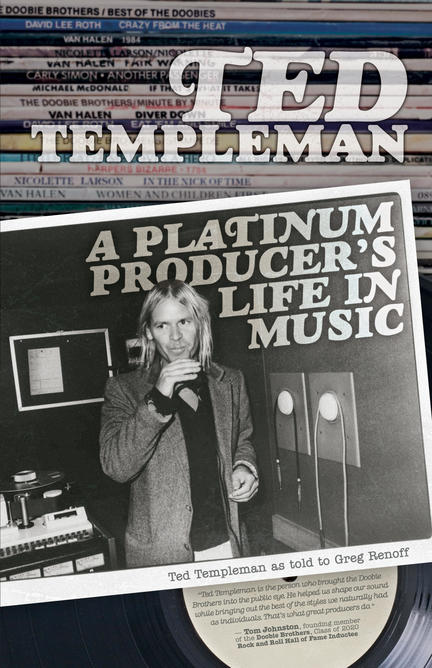 This autobiography (as told to Greg Renoff) recounts Templeman’s remarkable life from child jazz phenom in Santa Cruz, California, in the 1950s to Grammy-winning music executive during the ’70s and ’80s. Along the way, Ted details his late ’60s stint as an unlikely star with the sunshine pop outfit Harpers Bizarre and his grind-it-out days as a Warner Bros. tape listener, including the life-altering moment that launched his career as a producer: his discovery of the Doobie Brothers.

Ted Templeman: A Platinum Producer’s Life in Music takes us into the studio sessions of No. 1 hits like “Black Water” by the Doobie Brothers and “Jump” by Van Halen, as Ted recounts memories and the behind-the-scene dramas that engulfed both massively successful acts. Throughout, Ted also reveals the inner workings of his professional and personal relationships with some of the most talented and successful recording artists in history, including Steven Tyler and Joe Perry of Aerosmith, Eric Clapton, Lowell George, Sammy Hagar, Linda Ronstadt, David Lee Roth, and Carly Simon.

Ted Templeman is an award-winning music producer who discovered Van Halen and The Doobie Brothers. Greg Renoff was born in the Bronx, grew up in New Jersey, and now lives in Tulsa, Oklahoma. He is the author of Van Halen Rising: How a Southern California Backyard Party Band Saved Heavy Metal. His writing has appeared in Guitar World, LA Weekly, and Vulture, and he and his work have been profiled in Salon, Maxim, and the Boston Herald.

What gave me pause about “Jump” was my instinctive sense of what defined the Van Halen sound. When I produce an artist, I get a feel for what will likely work -- and not work -- on an album, especially when you’ve done five with them.

To me, Van Halen wasn’t a pop group. Yes, they’d done “Dance the Night Away” and “Pretty Woman,” but that was as far afield from their raucous, primitive nature that I wanted them to go. “Jump” was way too pop to my ears. I wanted them to stay edgy and raw.

As I tried to explain to Ed and the guys, it wasn’t that I was “anti-keyboards.” Remember, I was completely fucking knocked out when Ed played me the piano riff for “Cradle” at Sunset Sound. Ed had played keyboards on “Dancing in the Street.” I know it sounds like an odd comparison, but the “Jump” riff didn’t sound like Ed’s “Ain’t Talkin’ ’bout Love” riff. That’s the stomping, powerful sound that I thought they should have kept pursuing. Even though Diver Down served its purposes, it was too pop for me. I liked the Fair Warning stuff better. I thought these guys should stay right in that pocket, and not go pop. To me, Van Halen doing “Jump” seemed analogous to Keith Richards pushing for the Stones to record something sappy like “You’ve Got a Lovely Daughter” by Herman’s Hermits right after they’d done “Brown Sugar.”

The other point I tried to get across that day was about Ed’s guitar playing. I think Ed recalls this debate as Dave and I wanting to keep him locked into “guitar hero” mode for the sake of his image. I can’t speak for Dave, but that wasn’t where I was coming from. His image had nothing to do with my view. Here’s the thing. Ed’s a guitar genius. No one has ever played or ever will play the way that he did on electric guitar. You immediately knew it was him playing something, and he had profound things to say on the instrument. Guys tried to copy him, and none of them came close. He was like Charlie Parker or Errol Garner. Ed’s right in there with jazz guys like that; they are generational talents. But, to me, any competent keyboardist could have played that keyboard riff. You can’t say the same about anything he plays on guitar.

But Ed, to his credit, told me I was wrong about “Jump” not working for Van Halen. He said, “Ted, I’ve been listening to a lot of classical music and playing keyboards and this is what I came up with. I really like it.” He didn’t say it, but I also knew that Donn had been encouraging him to stretch out musically, to follow his muse, and write on keyboards.

I could see Ed had a big personal investment in the song, and had worked hard on it. So I said, “Okay, fine. It’s a start. That doesn’t really float my boat, but let’s see where we can go with it.” Again, this was Ed’s taste versus mine. He wanted to work on it, so I was game. What I didn’t say was: Let’s not do the song.

I left, went home, and went to bed. Then around three in the morning, the phone rang. I let it go to the answering machine, but the volume on it was up, so I could hear the message after the beep.

“Wake up! We’re still here. We’ve got something great for you to hear.”

They held the phone up. I could hear “Jump” playing.

They sounded jazzed, so I called right back. Ed said he’d come and get me at my place in Century City.

If I'm not mistaken, Ed did in fact pick me up and took me up there to hear it.

It turned out that Dave and Mike had gone home too, but Ed, Alex, and Donn had stayed up all night. They’d recorded basic tracks for three songs from 1984: “Jump,” “I’ll Wait,” and “Drop Dead Legs.”

Donn rolled tape on the newest version of “Jump.” He played it a few times. As I listened, it really put the hooks into me. He and Al had the riff and groove nailed down tight. It killed me. The keyboard parts Ed had down -- it wasn’t a complete song yet -- were very close to what ended up on 1984.

“Templeman (via Renoff) comes off as an engaging and friendly narrator and tour guide behind the making of some of classic rock’s greatest records.” — Houston Press

“[Templeman] and Renoff have undertaken a challenging task in chronicling his extensive career, but the result is a fascinating account of a panoramic musical journey.” — Pop Matters

“Entertainment options have dwindled during this stay-at-home period in history. But books are still ripe for exploration, and Templeman’s life proved to be fertile ground.” — Tulsa World

“Rock music fans would enjoy this read, especially fans of The Doobies, Michael McDonald, and Van Halen. It is a lengthy book for a person with a lengthy career.” — Lance Writes blog