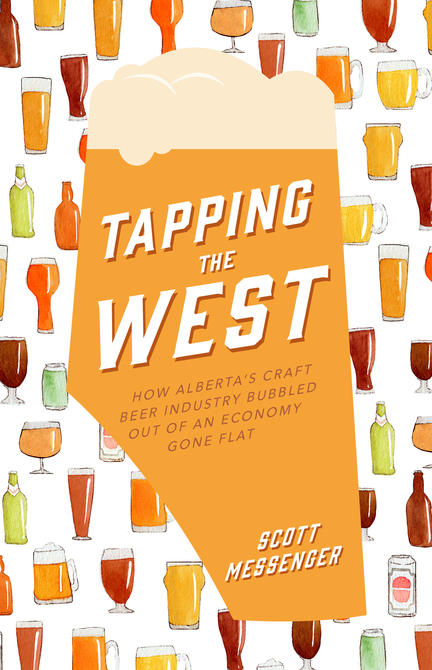 The story behind Alberta's craft beer boom. An insider’s look that brings together tasting notes, social history, politics, and science.

When Alberta eliminated its laws around mandatory minimum brewing capacity in 2013, the industry suddenly opened to the possibility of small-batch craft breweries. From roughly a dozen in operation before deregulation, there are now more than a hundred today, with new ones bubbling up each month. It’s an inspiring story, one that writer Scott Messenger tells in impressive scope.

At a time when Alberta was still recovering from the plunge in oil prices in 2008, deregulation represented a path to economic diversification. Messenger takes readers on the road with him to investigate artifacts left behind by Alberta brewers dating to the late-1800s, to farms responsible for the province’s unrivalled malt, and into the brewhouses and backstories of some of Canada’s best new beer makers. It’s an insider’s look at history in the making.

With humour, straight-talking tasting notes, and a willingness to challenge stereotypes, Messenger introduces us to key players in the industry. We meet Graham Sherman of Tool Shed Brewing, who helped spearhead the change in legislation; Greg Zeschuk, whose Belgian-inspired brewery is poised to put Alberta beer on the global map; the sisters behind Northern Girls Hopyard, Alberta’s first hop farm; and many more.

Messenger winds up his narrative with a good, old-fashioned pub crawl, a fitting finale for the story of an industry that is, at its heart, about having fun with friends. Bringing together social history, politics, and science, Tapping the West is engaging and balanced—not unlike the perfect you-know-what.

Scott Messenger’s blog One Year of Alberta Beer was featured on CBC radio, and led to a deeper examination of the steadily booming craft beer industry in Alberta. His writing on a variety of subjects has appeared in the Guardian, Eighteen Bridges, Canadian Geographic, Avenue and more. He lives in Edmonton with his wife and two daughters.

"Tapping the West starts with Messenger and two friends, all local craft beer fans, embarking on a journey from Edmonton to explore as many breweries in Calgary as possible in one night. But it's so much more than that, and over the next 268 pages he takes us on a much longer journey from Alberta's beer pioneers to almost present day—and it's a great read. We couldn't put it down." —Culinaire

"Tapping the West is not a regional beer guide . . . Messenger avoids profiling all 100+ Alberta craft breweries and only does quick tasting notes on a few beers in passing. Instead, he tells the story of beer in Alberta, including a good look at pre and post prohibition brewing history. He utilizes a more personable style of journalism, including himself and his responses in his interviews and explorations. Messenger’s style is affable and affective. He digresses in a way that many beer fans will relate to, as he describes the unique personality of those he interviews and the experiences he had while researching the book. . . . It’s refreshing to see a writer take a wider view of beer, including regional politics, culture, and economics." —What's Brewing