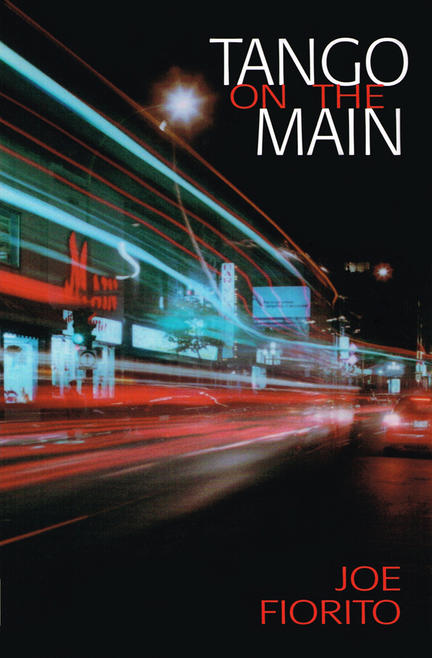 In this award-winning collection from his Montreal Gazette city columns, Joe Fiorito reveals the true heart and soul of a large city. He walks the streets, meeting and talking to the people who make the city tick, but never make the front-page news. In Tango on the Main he introduces us to Jackie of the Ritz, Montreal's chambermaid to the stars...the itinerant who reads Tennyson and drinks his daily pint of vodka on the McGill campus...the former featherweight champ who spends his mornings at the gym and his afternoons taking care of his ailing wife -- to name but a few of the memorable characters whose lives he explores.

Joe Fiorito was born in Thunder Bay, Ontario. As a young man in Northern Ontario, he worked in a paper mill, surveyed roads, and laboured in bush camps prior to becoming involved in community development and arts consulting. Fiorito spent five years working with a staff of Inuit journalists at CBC Radio in Iqaluit, NWT before transferring to Regina, where he wrote, produced and directed CBC Radio's highly acclaimed "The Food Show," a weekly program about food and agriculture. Fiorito lived for many years in Montreal, where he first wrote a weekly food column for HOUR, and later signed on as a city columnist for The Montreal Gazette. His first collection, Comfort Me with Apples: Considering the Pleasures of the Table, a series of essays about food and memory drawn from Fiorito's HOUR columns,  was published by Nuage Editions (now Signature Editions) in 1994. In 2000, it was  reissued by McLelland & Stewart. Tango on the Main, Fiorito's second collection, was selected from his Gazette columns.Fiorito relocated to Toronto, writing first for The National Post and then for The Toronto Star. In 1999, he published his family memoir, The Closer We Are to Dying (M&S), which became a national best-seller and received widespread critical acclaim. This was followed by the award-winning novel The Song Beneath the Ice (M&S, 2003) and Union Station: Love, Madness, Sex and Survival on the Streets of the New Toronto. (M&S, 2007).

Excerpt: Tango on the Main (by (author) Joe Fiorito)

My old man died on the second of June, of a cancer so muscular and aggressive that it seemed to lift him up and throw him down a dozen times a day, as if he were made of rags instead of flesh and blood.

There were hot spots all over his bones. There was a fist of it near his kidneys, an egg-sized lump under his arm and a great thick slab of it sitting on his chest, above his heart. He tried to fight it off with everything he had. He never gave up any more of himself than he had to. He died with his fists clenched, an inch at a time.

Even though the pain was swift enough to stay one step ahead of the morphine, my old man never admitted there was anything much the matter. As if naming the devil might give it power. When his doctor asked him how he was, he'd reply "Not so bad," and ask "How about you?" as if he were making a social call.

He didn't want to frighten anyone with the extent of the disease. He left it to my mother to parse the grammar of his moans at night, so she could tell the doctor what she'd heard when they went together to the clinic in the morning.

My old man was, among other things, a part-time dance-band musician who played spaghetti jobs for nearly sixty years. A spaghetti job is musician's talk in the Lakehead for a dinner dance, even when the food was roast beef and cabbage rolls, and the dance was at the Finn, and not the Italian Hall.

He was a handsome bugger with a banjo on his knee. He was a young man with a slide trombone. Later in life, he leaned against his bass fiddle and caressed it while he sang the blues, and couples on the dance floor held each other close and made love listening to his voice.

I made the mistake one night of taking a date to watch him play. She spent the evening with her elbows propped on the table, her chin resting in her hands, a dreamy expression on her face, staring at my old man, watching him work the slide of the horn sweetly back and forth. Too Freudian, even for me. I took her home and said goodnight and shook her hand.

I spent the last month with my old man, sleeping in an armchair in his hospital room, listening to him gasp for breath at night.

The first week, he was well enough to tell me stories, although he'd often fall asleep before he finished what he was saying. Not that it mattered. He always told the same stories the same way every time he told them. I know most of them by heart. The time he stole the piano. The dog who followed him home. The time his cousin got drunk and fell asleep and let the still blow up.

One night, my old man opened his eyes and lifted his head and looked at me and asked "Who brought the charges?" I asked him what he meant. He looked away. He said "There had to have been charges." He thought he was in jail.

The next night, he woke and looked at me again. He said "They can't keep my shoes from me, can they?" He thought if he could get his shoes, he could sneak out. No such luck, Pops.

As if his needle was stuck in the groove.

My old man was a small-town Fellini who brought a little magic and a little cruelty to nearly everything he did. One night, when I was a kid and he was playing in the circus band, he brought Victor Julian home for supper. Victor Julian was the guy with the dancing dogs. Victor Julian took one look at my little Trixie, she with the patch over her eye and her little dog grin and her whippet's tail.

He waited until I went outside after supper, and then he made my dad an offer. A week's wages, at a time when my folks had no money to speak of, and four boys to raise.

When I came in from playing after supper, the room fell silent. Nobody looked at me. My old man told me Trixie would have a good home with all the other circus dogs. She'd get to travel and see the country. Victor Julian said he'd take her with him on the Ed Sullivan Show.

I was ten years old. It hurt me to see Trixie go. I could understand about the money. We were always broke. But I thought the Ed Sullivan business was a bit much. I thought they didn't have to lie.

Trixie grinned over her shoulder at me as she trotted out the door with Victor Julian. The next day, the newspaper carried a photo of my dog, and a story with the headline "Local Pooch Makes Good."

Six months later, we got a note telling us Trixie was going to be on TV. I didn't want to believe it, in case it wasn't true. I held my breath until Sunday.

During the second half of the show, Ed Sullivan introduced Victor Julian. He stepped on stage in his tux, with his top hat on his head. Following behind him, last in a line of dancing dogs, dressed in a little skirt, with a little hat on her head and a ruffled collar round her neck, grinning ear to ear and wagging her skinny whip of a tail, was my little Trixie.

She jumped through a hoop. She walked up a ladder. She grinned at the other dogs. I forgave my old man instantly. We were still broke, the money was long gone to pay bills, but one of us, even if it was only the dog, had made it to a better life.

Not all of what my old man did ended with a magic turn. In the end, there were too many late nights and too many pieces of himself tendered easily to strangers.

It couldn't have been easy to sell my dog. I forgave him, anyway. He worked hard, he loved his sons, and if he promised us more than he could reasonably deliver, in the end he gave us all he had.

The final week of his life, my old man was down to single words, then gestures. The last thing I saw him do, at quarter to nine on the morning of the last day of his life, was raise his fist and shake it.

Montreal's polychromatic personality is not just quirky, it is two minds and many seasons, eccentric to the point of being split, at once spiritual and bawdy, elusive but in-your-face. But it is also as true to itself as a carpenter's level. And Joe Fiorito digs away at that truth as no one has in Tango on the Main, a collection of prize-winning Gazette columns that provides an indispensable vade mecum to the city in its many moods. Fiorito is that wonder of wonders, a deeply curious and perceptive reporter who is also a fine and imaginative writer. In the manner of Pablo Neruda's odes to socks and kindling wood and all the accoutrements of everyday life, his lapidary prose names things, building toward a definition of urban life.

Other titles by Joe Fiorito

All I Have Learned Is Where I Have Been

The Life Crimes and Hard Times of Ricky Atkinson, Leader of the Dirty Tricks Gang

Rust Is A Form of Fire

The Exile Book of Priests, Pastors, Nuns and Pentecostals

Stories of Preachers and Preaching

Love, Madness, Sex and Survival on the Streets of the New Toronto

The Song Beneath the Ice

The Closer We Are to Dying

Comfort Me with Apples

Considering the Pleasures of the Table