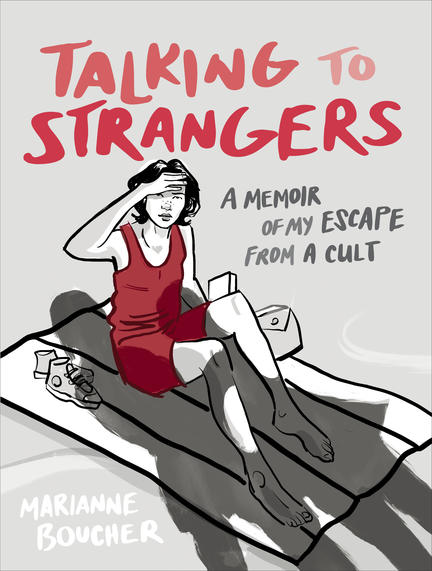 For fans of Wild Wild Country, Scientology and the Aftermath and Uncover: Escaping NXIVM, a spellbinding graphic memoir about a teenage girl who was lured into a cult and later fought to escape and reclaim her identity.

Welcome to a place where you are valued. Where everyone is kind. Where you can be your truest self.

It was the summer of 1980, and Marianne Boucher was ready to chase her figure skating dream. Fuelled by the desire to rise above her mundane high-school life, she sought a new adventure as a glamorous performer in L.A.

Soon, she'd abandoned school, her skating and, most dramatically, her family to live with her new friends and help them fulfill their mission of "saving the world." She believed that no sacrifice was too great to be there--and to live with real purpose. They were helping people, and they cared about her . . . didn't they?

Talking to Strangers is the true story of Marianne Boucher's experiences in a cult, where she was subjected to sophisticated brainwashing techniques that took away her freedom, and took over her mind. Told in mesmerizing graphic memoir form, with vivid text and art alike, Marianne shares how she fell in with devotees of a frightening spiritual abuser, and how she eventually, painfully, pulled herself out.

MARIANNE BOUCHER is an illustrator and painter. She works for a television station in Toronto and has covered major criminal trials as a court reporter/illustrator since graduating from OCAD University. She lives in Toronto with her cool family.

"Talking to Strangers is [Marianne Boucher's] graphic un-novel, an eight-year undertaking, a memoir gush of captions and drawings documenting how she was reeled in and then snatched out, largely on the retrieval efforts of her dogged mother—twigged to the cult phenomenon by following the plotline on a soap opera, The Young and the Restless—and a de-programmer." —Toronto Star

Launching the graphic memoir Talking to Strangers: A Memoir of My Escape from a Cult.